A Marriage of Movements: The Brotherhood of Sleeping Car Porters 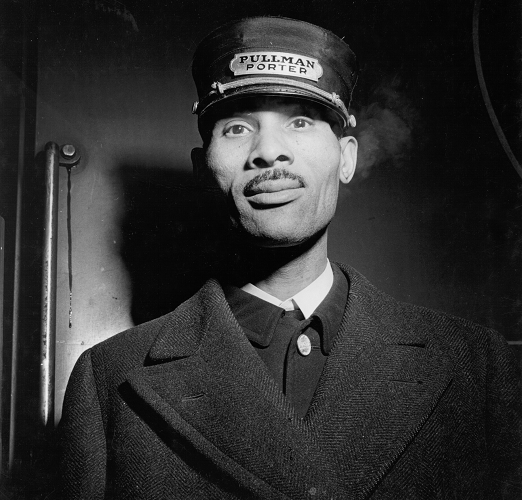 In 1925, several New York City-based porters that worked on sleeping cars for the Pullman Company sought out help from a known organizer, A. Phillip Randolph, for assistance in organizing what would be the first successful African-American labor union. The group, called the Brotherhood of Sleeping Car Porters, would marry the Labor Movement to the Civil Rights Movement for the first time in American history.

As Randolph led their organization efforts, they encountered fast resistance. The labor movement had often been seen to be at odds with the Civil Rights movement, frequently dismissing the rights of black Americans in favor of white Americans. What’s more, middle-class black leaders resisted the efforts of the BSCP for fear of upsetting George Pullman himself, long considered to be an ally of the black community. After all, the Pullman Porter lifestyle seemed glamorous in many ways: extensive travel, riding the railroads, seemingly earning what amounted to a middle-class income. What was there to organize against?

The group struggled after extensive firings, intimidation, the Great Depression, and a canceled strike in 1928. Membership dropped dangerously low, and the fledgling union looked as though it wouldn’t last. Randolph spent the next several years fighting against the false image of the Pullman Porter as a glamorous job: long hours with no overtime pay, little job security, and poor wages curtailed by having to purchase a uniform, pay for lodging, and buy their own meals. It took time, but eventually, popular support for the Brotherhood rose.

In the end, it was the New Deal that would save the union from utter failure. Franklin D. Roosevelt’s reforms to pull the country out of the Great Depression meant a reshaping of the way employers treated employees. This means that the BSCP gained legal ground for much of its efforts, and quickly saw a resurgence in its membership. The American Federation of Labor finally came on board, marking the first time it willingly granted international status to a black union. In the end, the BSCP was able to successfully negotiate a contract with George Pullman that granted them overtime pay, a shorter work week, and wage increases.

Read more of the original story on Pbs.org at http://www.pbs.org/wnet/jimcrow/stories_org_brother.html