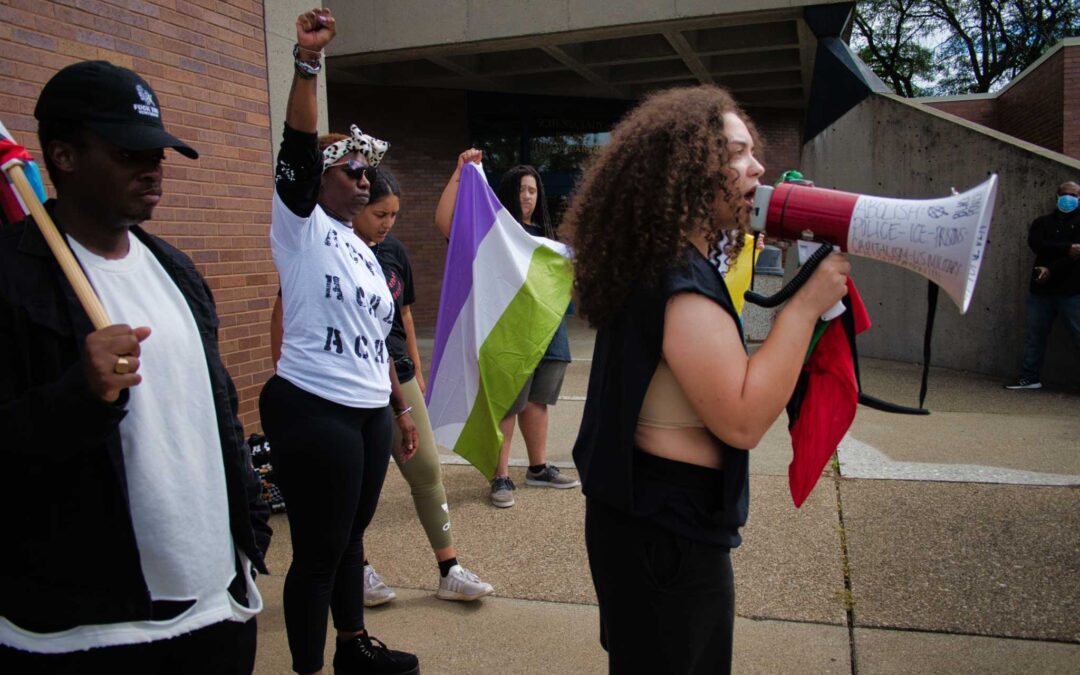 “Without transparency, there will never be (accountability),” Figuereo said.

Attorney General Letitia James mentioned on Thursday that her office is examining actions taken in upstate cities after WAMC-90.3 FM asked her about police treatment of protesters in Saratoga Springs and Schenectady. She stopped short of naming the cities the bureau is looking at, but locally high-profile arrests of protesters in those two cities have fueled complaints that police are trying to intimidate racial justice advocates with arrests, and in the case of Saratoga Springs, hours of detention for low-level violations and misdemeanor charges.

“There are a number of jurisdictions that we are looking at,” James said. “I cannot tell you what jurisdictions, but our offices, our Civil Rights Bureau, was looking into a number of things, investigations, upstate.”

As attorney general, James is the state’s most powerful prosecutor, who, among other things, watches over civil and human rights. In August, James released a report on allegations of sexual harassment against then Gov. Andrew Cuomo in which she found his 11 accusers credible. That report, five months in the making, led to Cuomo’s resignation.

Samira Sangare, who was arrested for disorderly conduct on Sept. 7 by Saratoga Springs police for her participation in the July 14 protest, said James’ investigation into the police “is extremely important.”

“She needs to understand that police are targeting Black activists,” Sangare said. “In all honesty, what Saratoga and Schenectady police departments are doing is shining a light on the fact that there needs to be an investigation.”

Lt. Robert Jillson, spokesman for the Saratoga Springs police, said the agency would cooperate if the AG’s office investigates its treatment of activists.

“If they opt to investigate us or come up here – they have done that with other things that we have been cooperative and forthcoming – I wouldn’t think it would be any different,” Jillson said.

Over the past month, social and racial justice advocates have been arrested in both cities, 12 in Saratoga Springs and two in Schenectady, on warrants in connection to events that took place weeks earlier.

In Saratoga Springs, the dozen arrests were in connection with a July 14 protest in which Broadway traffic was blocked for several minutes. A 911 caller, riding in a car, asked the police to “do something” to move traffic so he could get home to take his heart medication. That call, Jillson said, prompted an investigation that led to charges of disorderly conduct and unlawful imprisonment.

Five of the protesters were pulled off the street when they were arrested, rather than being presented with summonses. Four were held for four hours before being arraigned in shackles. Another man was held overnight.

A newspaper is a force for bringing to light misbehavior by the powerful, tells the stories of society’s most vulnerable, and tracks conversations on the best way to achieve change.

Last Tuesday, activists were also barred from entering Saratoga Springs City Court to watch the proceedings of activists who were facing arraignment. Commissioner of Public Safety Robin Dalton said she was looking into that.

“As the Commissioner of Public Safety, I take these allegations very seriously and am undertaking a thorough investigation concerning any possible involvement of the Saratoga Springs Police Department,” Dalton said on Friday. “While the city does not have any authority over the operation of the Court System, access to public buildings and facilities should never be unduly restricted.”

In Schenectady, two activists surrendered Thursday on charges of disorderly conduct and endangering the welfare of a child after they allegedly yelled obscenities at police at an Aug. 26 community event for children. They were not, however, held in the city jail nor cuffed and shackled when they appeared in court on Thursday. They were arraigned and released.

Last week, the regional director of the New York Civil Liberties Union, Melanie Trimble, said her organization is monitoring the activities of both city police departments and accused Saratoga Springs police, specifically, of acting as a “racist organization.”

“It’s time for Attorney General James to open an investigation into the discriminatory treatment that Black Lives Matter protesters have faced in Saratoga, Schenectady, and wherever voices calling for racial justice are being silenced, suppressed and targeted statewide. The intimidation and arrests in Saratoga, and Schenectady, lawmakers using their authority to condemn BLM activists must come to an end.”

Regardless, Figeureo said he and his allies will not stop fighting injustice.

“Saratoga BLM will continue to fight for justice, transparency, equity and inclusivity for all,” he said.