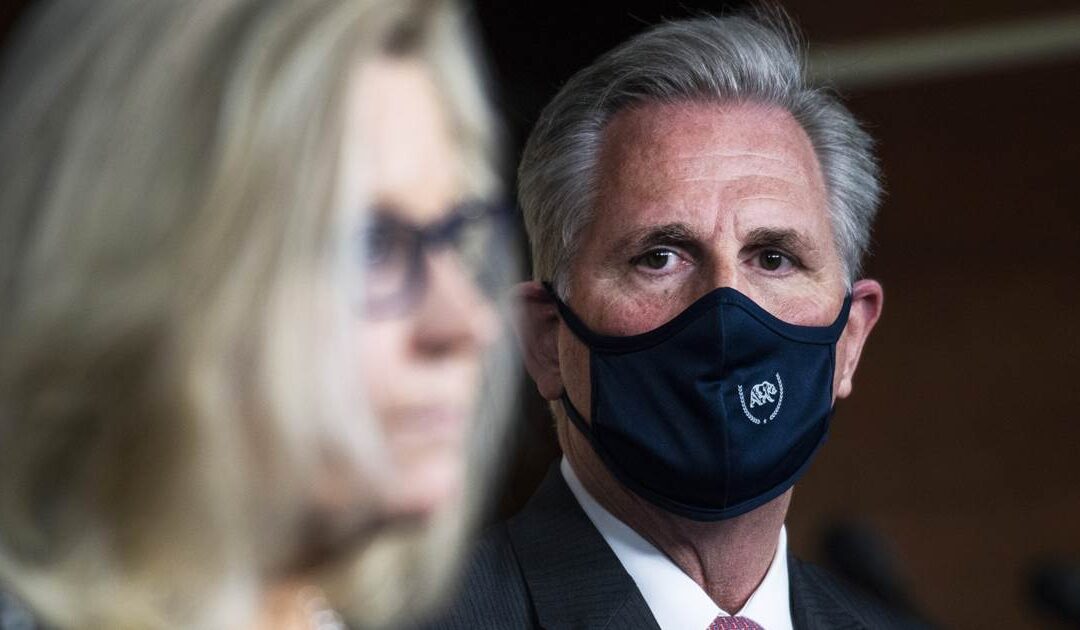 The House Republican leadership skirmish that has simmered for weeks — one that has pitted House Minority Leader Kevin McCarthy, R-Calif., against House Republican Conference Chair Liz Cheney, R-Wyo. — appears to have reached its boiling point this week.

At issue is Cheney’s refusal to back down from her criticisms of former President Donald Trump, despite growing pressure from other Republicans. She was the highest-ranking Republican to vote to impeach Trump for his role in inciting the Jan. 6 riot and has been at odds with other members of House GOP leadership over embracing Trump and entertaining his election claims since then. She has repeatedly and forcefully rejected Trump’s stolen election lie.

On Tuesday, the skirmish and its latest developments drew attention from lawmakers on both sides of the aisle. House Speaker Nancy Pelosi’s office boosted the ongoing quarrel and Sen. Mitt Romney, R-Utah, signaled his support for Cheney as the divide threatens to dent Republican efforts to take back the House next fall.

“Word is out that House GOP Leaders are looking to push Rep. Liz Cheney from her post as House Republican Conference Chair — their most senior woman in GOP leadership — for a litany of very Republican reasons: she won’t lie, she isn’t humble enough, she’s like a girlfriend rooting for the wrong team, and more,” Pelosi’s office said in a blog posted to her website.

Speaking in San Francisco, Pelosi, D-Calif., told reporters she commends Cheney “for her courage, for her patriotism, and I wish her well.”

Romney, who was met with some boos at the Utah GOP convention this past weekend, tweeted a message of support for Cheney on Tuesday afternoon.

“Every person of conscience draws a line beyond which they will not go: Liz Cheney refuses to lie,” Romney wrote on Twitter. “As one of my Republican Senate colleagues said to me following my impeachment vote: ‘I wouldn’t want to be a member of a group that punished someone for following their conscience.'”

Democrats currently own a slim 218-212 House majority over the GOP. With historical trends pointing against the party in power during a new president’s first midterms, Republicans are confident they can retake the majority without much of a boost. On Tuesday, the National Republican Congressional Committee released a list of 10 additional Democratic members it would be targeting in hopes of flipping the House, raising the number of targets to nearly 60.

The latest dustup began Monday, with tensions escalating since. It started after Cheney tweeted that anyone claiming the 2020 presidential election was stolen is “poisoning our democratic system,” a direct response to a Trump statement from earlier in the day.

Cheney also warned Monday the GOP should not “whitewash” the riot, telling a crowd of donors and scholars during an off-the-record interview with former House Speaker Paul Ryan, R-Wis., at the annual American Enterprise Institute retreat, “We can’t embrace the notion the election is stolen.”

“It’s a poison in the bloodstream of our democracy,” Cheney said in remarks first reported by CNN. An aide familiar with the comments confirmed the accuracy of them to NBC News. “We can’t whitewash what happened on Jan. 6 or perpetuate Trump’s big lie. It is a threat to democracy. What he did on Jan. 6 is a line that cannot be crossed.”

Rep. Cheney stands by criticism of Trump despite mounting pressure from Republicans

Cheney’s position has her at odds with McCarthy, who has tried to keep his conference aligned with the former president. After initially assigning Trump blame for the riot — though he voted hours after the attack to block the counting of some electoral votes for Joe Biden — McCarthy has worked to get back into the former president’s good graces, including visiting Trump at his Mar-a-Lago club in Florida.

“I think she’s got real problems,” McCarthy told “Fox and Friends” host Steve Doocy off-air ahead of a live interview Tuesday, according to a hot mic recording obtained by Axios. “I’ve had it with … I’ve had it with her. You know, I’ve lost confidence. … Well, someone just has to bring a motion, but I assume that will probably take place.”

NBC News has not obtained the recording. Requests for comment from McCarthy’s office and Fox News were not immediately returned.

During the live portion of that interview, McCarthy said “there’s no concern about” Cheney’s impeachment vote from fellow House Republicans.

A Cheney spokesperson, Jeremy Adler, said in a statement to NBC News following McCarthy’s live remarks: “This is about whether the Republican Party is going to perpetuate lies about the 2020 election and attempt to whitewash what happened on Jan 6.”

While Cheney has emerged as Trump’s most powerful House Republican critic, an attempt in February by Trump allies to strip her of her leadership post failed overwhelmingly, 145 to 61.

The lopsided vote came by secret ballot, indicating broad private support for Cheney inside the conference then, even though many have been wary of speaking out publicly for fear of igniting Trump’s wrath.