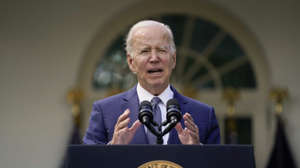 © Provided by The Hill

“It’s bittersweet when you know how long disproportionate criminalization of both consumption and possession has been for Black and Brown communities. This is a long hoped-for, reached-for, fought-for action by the President and we’re very thrilled that he’s keeping his campaign promise,” she added.

The U.S. has a long history of racializing marijuana use. Mexican immigrants first introduced recreational marijuana to American culture in the 1910s, according to PBS. The drug became associated with the immigrants, and anti-drug campaigns linked marijuana with violence and crime committed by “racially inferior” communities.

The effects of the policies have continued to be felt in the years since. The ACLU reported in 2020 that more than 6 million arrests occurred between 2010 and 2018 for marijuana — and Black people are more likely to be arrested for marijuana possession than white people in all 50 states, including those that have legalized marijuana.

Advocates have pushed for Biden to legalize weed since his election, and many cheered the president’s decision Thursday.

The Congressional Black Caucus said the president’s “transformative” actions are righting “the historic injustices from the failed War on Drugs.”

“Possession of marijuana has upended far too many lives and incarcerated Black people at an alarmingly disproportionate rate for activities that many states no longer prohibit,” said Chairwoman Joyce Beatty (D-Ohio). “Criminal records for marijuana possession have also imposed insurmountable barriers to employment, housing, and educational opportunities for countless Black and brown Americans.”

“We applaud President Biden for pardoning those who have been convicted for the simple possession of marijuana,” NAACP President Derrick Johnson said in a statement.

The organization has long stressed the inherent unfairness in the incarceration of Americans for use or possession of the substance when the industry itself makes billions each year.

While Biden’s actions Thursday pardon those convicted of a federal offense, he is also calling on governors to pardon state offenses.

However, the substance remains illegal at the federal level.

Rev. Al Sharpton, founder and president of the National Action Network, said the nation must confront the racism that allowed the disproportionate incarceration of Black men before legalization can fully take place.

“The United States will never justly legalize marijuana until it reckons with the outdated policies that equated thousands of young Black men with hardened drug pushers,” said Sharpton. “President Biden’s righteous action today will give countless Americans their lives back. They were thrown behind bars for years on end for simple possession, a non-violent offense, for a substance that red states and blue states are now legalizing at a furious clip.”

“This held them back from jobs, homes, and the general dignity they now get back with this full pardon,” he continued. “We will continue to monitor the legalization and hold the federal government to its word.”

Hutchinson, of the Marijuana Policy Project, said true justice will require economic equality in the industry as well.

“That same multibillion dollar industry that’s operating should have space and room for the people who were penalized by the exact same activity,” said Hutchinson. “Real justice and real cannabis equity comes when the industry also opens up and more people are empowered.”

“Black and brown people need to be a part of this newly expanding industry that has all kinds of potential for generational wealth,” she continued.

“It cannot be that when you talk about Black and brown people that you only talk about prison and that you only talk about criminality and sentences and stereotypes. There should be business operators and owners and investors and people who work in the facility and in an industry that is open and warm and welcoming to all people, especially the ones who are harmed the most by the prohibition of the exact same thing.”

For the latest news, weather, sports, and streaming video, head to The Hill.