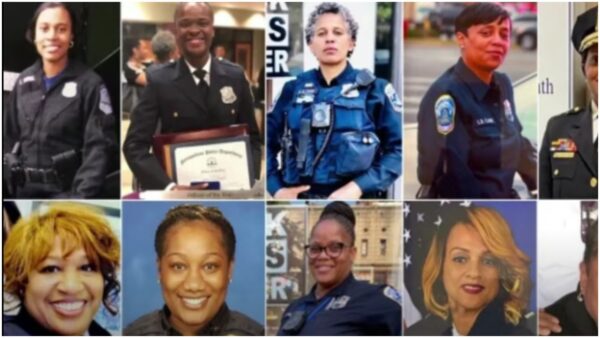 *The D.C. Metro Police Department is being sued by ten Black female officers (current and former) for racial and gender discrimination.

In a more than 250-page class action complaint, the women claim they were discriminated against and the division in charge of addressing such issues was run by a man who has repeatedly expressed hostility toward female officers and colluded with management to discredit women who come forward.

Watch the video report below.

“They come together as a class here to describe how the MPD has, for decades, treated Black women police officers with contempt, to the point of systematic psychological abuse,” the lawsuit states. “As is often the case, the abuse is often not visible by looking at one person, or one incident.”

The women complained “multiple times about unfair treatment on the basis of race and gender” but their managers failed to take action.

Plaintiff Tabatha Knight said the lawsuit is “about women who are tired of being harassed, disrespected and divided.”

“We were labeled as troublemakers, angry Black women, and I’m here to say that we are not angry black women,” Knight said Wednesday at a press conference. “We are tired women and no one should have to endure what we did.”

Donald Tebow, one of the attorneys for the women, said DC and its police department “institutionally, and systematically discriminates against African American women employees who suffer, almost on a daily basis, a double standard.”

The plaintiffs are seeking $100 million in compensatory damages, CNN reports.

← Column: A returned Bruce’s Beach? Police reform? It was a good day for Black Californians ← ‘We are under bandits’: Dozens killed and abducted in Nigeria | News | Al Jazeera