“Black Panther” Takes on Colonialism Again Within the Limits of Marvel 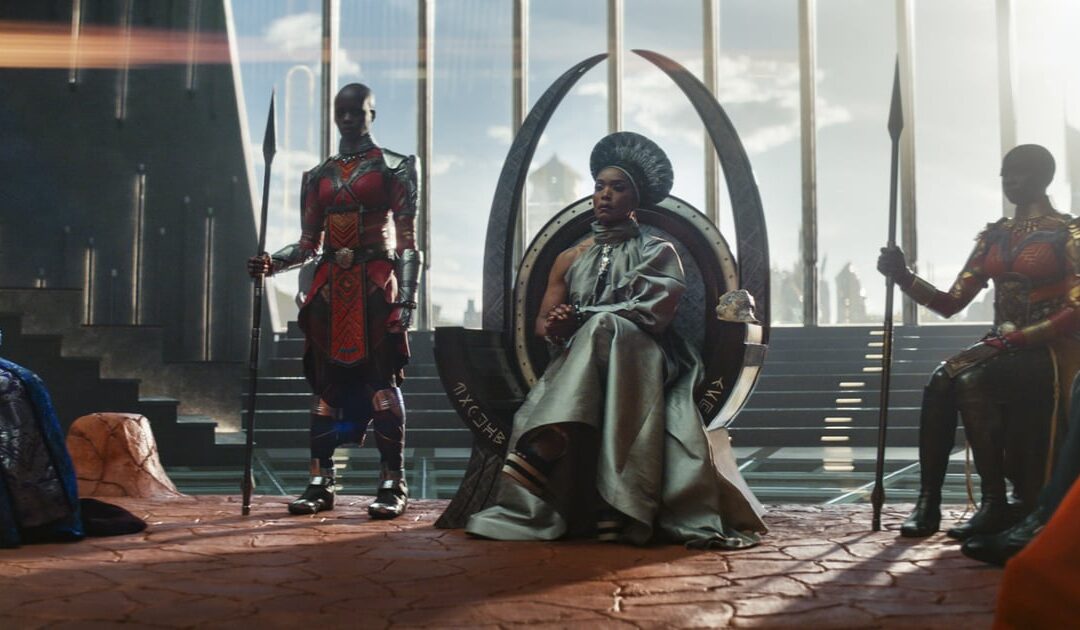 It’s hard to imagine even today, that Marvel would green light a movie where Black and brown heroes battle and vanquish white villains as its central conflict. But director Ryan Coogler’s “Black Panther” franchise seems to be inevitably drawing us closer to such an epic, anticolonial spectacle.

In “Wakanda Forever,” we get pretty close to diving into that narrative. Early in the movie, Angela Bassett, who plays Queen Ramonda attends a UN meeting. The white west, represented here by the US and France, tries to bully her into sharing Wakanda’s precious vibranium, the material that powers the previously hidden and technologically advanced African nation. But Queen Ramonda is not one to be trifled with. She rejects the idea that vibranium is dangerous, declaring that the nation states in front of her are where the true danger lies. Her character embodies everything from moral righteousness, anger, beauty, and power, and her theories are proven right, both historically and in the context of the film.

This critique of white power is in many ways central to the “Black Panther” films. But neither film seems quite able to push their anti-colonial critique idea as far as they want. Dr. Todd Steven Burroughs, Adjunct Professor at Seton Hall University and author of “Marvel’s Black Panther: A Comic Book Biography, From Stan Lee to Ta-Nehisi Coates,” explained to POPSUGAR, “There has always been a creative tension between the African American product and the American structure because the African American artist is always in tension . . . if we completely speak and act in decolonized ways, we’re not going to be able to function in society.”

That tension shows up clearly in the central conflict of “Wakanda Forever,” as the never-been-colonized African Wakanda fights the also long-hidden and vibranian-powered Mayan Talokan. Shouldn’t these two be natural allies? Why would the hundreds-of-years-old Namor, who has kept his country hidden for so long, jump to threatening his country’s one natural ally? And don’t say it’s because of the technological advances of the African American wiz-kid scientist, Riri Williams, played by Dominique Thorne. Because for someone of Namor’s age, one scientific breakthrough, however brilliant, is not much far behind its imitators.

No, Talokan and Wakanda’s conflict is only inevitable because the two exist within the confines of mainstream Hollywood (and comic books before that). And (spoiler coming), the two end as uneasy allies after all. It just took two hours and forty minutes to get us there.

The very creation and celebration of Namor is a feat that must be celebrated. Tenoch Huerta is powerful, righteous, and sexy. Like Michael B. Jordan’s Killmonger before him, Namor is forged in the colonial battle, which is the classic Latin American backstory until it isn’t. Spaniards invade his native lands and his mother, pregnant with him, and her people look for ways to escape. They find a magical plant (grown from vibranium-rich soil) that turns them into fish people, who can live underwater unbothered by geopolitical forces and the smallpox that powered them.

When young Namor goes to bury his mother in her native land, he encounters the Spaniards that drove his mother and her people to such extremes. By now, the colonizers have enslaved the native people and rule with cruelty. Namor decides to burn the whole thing down before escaping under the sea. With this sequence, “Wakanda Forever” makes clear that Namor’s anger is righteous and if he can’t be the hero, he can at least be an anti-hero, the type of villain we root for, even as we recognize his mistakes (fighting the Spaniards isn’t one of them).

Namor’s backstory is also a clear indictment of the colonialism that has defined the last several centuries of Latin American history, much like it has defined Africa’s history on the continent and in the diaspora. In the comic books, Namor is the king of Atlantis. The choice to move that European construct to Latin America is rooted in the film’s interest in taking on colonialism. Talokan Mayan allows the film to explore the similarities and a need for alliances among the global south.

Here’s where I wish “Wakanda Forever” had done more. Dr. Miguel Rojas Sotelo, Adjunct Professor at Duke University and Director of the North Carolina Latin American Film Festival, is a Marvel skeptic. But he still credits the first “Black Panther” with shaking up superhero visuals. He says “[‘Black Panthers’ filmmakers] do celebrate the beauty of the black body in an incredible way that breaks down the Western canon . . . [It’s] very powerful to pair [a] Black hero with all their white heroes and they recognize also the strength of the female presence.”

And “Wakanda Forever” doubles down on that, showing us more Black women exerting their power as queens, warriors, and scientists. No one here is fighting for a man or even grappling with sexism. Instead, the women of Wakanda are engaged in processing grief and running the world. Their conflicts are on how best to do those two weighty tasks. And by celebrating and showing their power, beauty, and vulnerability, “Wakanda Forever” builds on the legacy of the first film and that’s before we even get to the men.

But the franchise doesn’t quite expand that grace to Talokan. The film certainly rejoices in Namor’s indigeneity, lovingly rendering his brown, half-naked body, his accent, and his culture. But the rest of Talokan’s citizens don’t get the same treatment. Their kingdom is beautiful, yes, but their brown bodies are obscured behind blue paint and air masks. Part of the joy of watching “Black Panther” is seeing all the diversity of Black people celebrated. But in “Wakanda Forever,” only Namor is human. We celebrate his body, but his compatriots are more alien than Indigenous. It’s an odd choice (and it is a choice, comic books notwithstanding) for a film that was so smart and so pointed in celebrating and uplifting an anti-colonial definition of beauty and agency when it comes to its Black characters.

That said, “Wakanda Forever” does improve upon its predecessor in some important ways. Of the 2018 “Black Panther,” Dr. Burroughs says, “Hollywood is so sophisticated. They actually made a Black audience cheer when a white CIA agent shoots down and kills Black revolutionaries.” “Wakanda Forever” is more clear-eyed about the CIA though, presenting Martin Freeman’s Everett K. Ross as an outlier in the famously oppressive government agency, known to overthrow Latin American and African governments alike.

Still, there is perhaps a problem with looking to art for meaningful resistance to oppression. “Art has been always connected to power… through markets, I can get somebody to represent me, and I buy a status. [And] then art, entertainment, and capital are connected,” says Dr. Rojas Sotelo. Yet, we need to tell different stories to get a different political structure and the representation of Indigenous people in “Wakanda Forever” does demonstrate and hopefully advance, a meaningful evolution. It’s helpful to see the film as part of our ongoing cultural reckoning with the history of the US. As Dr. Rojas Sotelo says, “We are facing this original sin of the US on two levels – the expulsion and extermination of Indigenous peoples . . . and slavery.”

When viewed through that lens, “Wakanda Forever” had the opportunity to be so revolutionary. And it baked into its premise a strong anti-colonial critique. But still, it falters, whether because of big studio constraints or our larger culture. Because in the end, the only freedom the film can show us for Black and brown people is an imaginary one – the lost and hidden lands of Wakanda and Talokan. Those of us forged in the world’s true colonial past are unenlightened villains in “Black Panther,” unable to transcend the trauma enacted upon our communities. Vengeful like Killmonger and Namor, we are still defining ourselves against the colonizer and we should imagine more for ourselves. Hopefully, that will come in “Black Panther 3.”