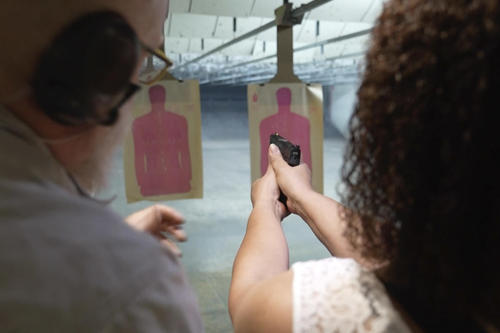 In this Aug. 21, 2021, image taken from video, Valerie Rupert is instructed on the proper way of using a fire arm at the Recoil Firearms store in Taylor, Mich. Rupert was among 1,000 or so mostly Blac[…]

In this Aug. 21, 2021, image taken from video, firearms instructors, left, and right, teach female customers on the shooting range at the Recoil Firearms store in Taylor, Mich. About 1,000 or so mostl[…]

In this Aug. 21, 2021, image taken from video, firearms instructor Wayne Thomas shows Valerie Rupert the proper hand position on a fire arm at the Recoil Firearms store in Taylor, Mich. Rupert was amo[…]

In this Aug. 21, 2021, image taken from video, Valerie Rupert is interviewed at the Recoil Firearms store in Taylor, Mich. Rupert was among 1,000 or so mostly Black women taking part in free weekend g[…]

In this Aug. 21, 2021, image taken from video, firearms instructor Wayne Thomas instructs women the proper stance in firearms shooting at the Recoil Firearms store in Taylor, Mich. About 1,000 or so m[…]

TAYLOR, Mich. (AP) – Valerie Rupert raised her right arm, slightly shaking and unsure as she aimed at the paper target representing a burglar, a robber or even a rapist.

The 67-year-old Detroit grandmother squeezed the trigger, the echo of her shot blending into the chorus of other blasts by other women off the small gun range walls.

“I was a little nervous, but after I shot a couple of times, I enjoyed it,” said Rupert, among 1,000 or so mostly Black women taking part in free weekend gun safety and shooting lessons at two Detroit-area ranges.

Black women like Rupert increasingly are considering gun ownership for personal protection, according to industry experts and gun rights advocates.

Fear of crime, especially as shootings and murders have risen in cities big and small, is one driver of the trend. But a new motivator is the display of public anger in the last 15 months beginning with confrontations in the wake of George Floyd’s death in Minneapolis under the knee of police officer Derek Chauvin.

Worries about the anger over COVID-related restrictions and the outrage over the outcome of the presidential 2020 election, driven by lies, are contributors, too. In Michigan, that anger led to a plot to kidnap the governor, as well as instances where armed protesters descended on the state Capitol.

In April 2020, hundreds of conservative activists, including some who were openly carrying assault rifles, flocked to the Michigan Capitol in Lansing to denounce Democratic Gov. Gretchen Whitmer’s stay-home order. Some demonstrators – mostly white and supporters of President Donald Trump – entered the building carrying guns, which is legal in the statehouse.

The sight of white men wearing body armor and holding guns at the Capitol still sticks with Rupert.

“They went up to the Capitol with all those guns. You need to be ready,” she said.

About 8.5 million people in the U.S. bought their first gun in 2020, the National Shooting Sports Foundation says. The trade association for the firearms industry adds that gun purchases by Black men and Black women increased by more than 58% over the first six months of last year.

“We’ve seen such an increase in white nationalist violence,” Webster said. “Some combination of the lack in faith in police protecting you and hate groups has motivated a lot of Black people to arm up.”

Still, 2020 saw “a tectonic shift in gun ownership in America” where there was “a huge increase of African Americans taking ownership of their Second Amendment rights,” said Mark Oliva, its director of public affairs.

Beth Alcazar, who is white, got involved with shooting about two decades ago and says it was rare to see a Black woman taking target practice.

“Honestly, not more than one image pops up of seeing a Black woman at the range,” said Alcazar, now a certified shooting instructor in the Birmingham, Alabama, area and U.S. Concealed Carry Association associate editor.

“With more involvement in the last five years, I see Black women on almost every occasion I go to the range,” she said, adding that it’s exciting for women learning how to shoot to see other women, especially women of color.

For many Black women, it’s about taking care of themselves, said Lavette Adams, a licensed firearm instructor who participated in the free Detroit-area training sponsored by gun advocacy group Legally Armed In Detroit.

“Crime against women is nothing new. Women protecting themselves, that’s new,” said Adams, who is Black.

That’s the premise behind the training that launched 10 years ago with 50 women attending. Last year, more than 1,900 participated, according to Rick Ector, Legally Armed in Detroit’s founder, who says he started it “to bring awareness and training to women who are the favorite preferred targets of bad guys, rapists and killers.”

Ameena Jumail, who joined dozens of other women outside Recoil Firearms in Taylor for the training, said she is working to overcome her fear of guns. Jumail, a 30-year-old kindergarten teacher from Detroit, said crime is one reason she came, but she admits that the desire to learn how to use a firearm includes concern over the rise in white nationalism and their open display of firearms in public places.

Hopkins’ Webster said whatever the reason, it is an open question whether the women who are buying the firearms now are safer.

“Having a loaded firearm with you is going to change your response in a number of situations,” he said. “It’s going to alter your behavior and perspective.”