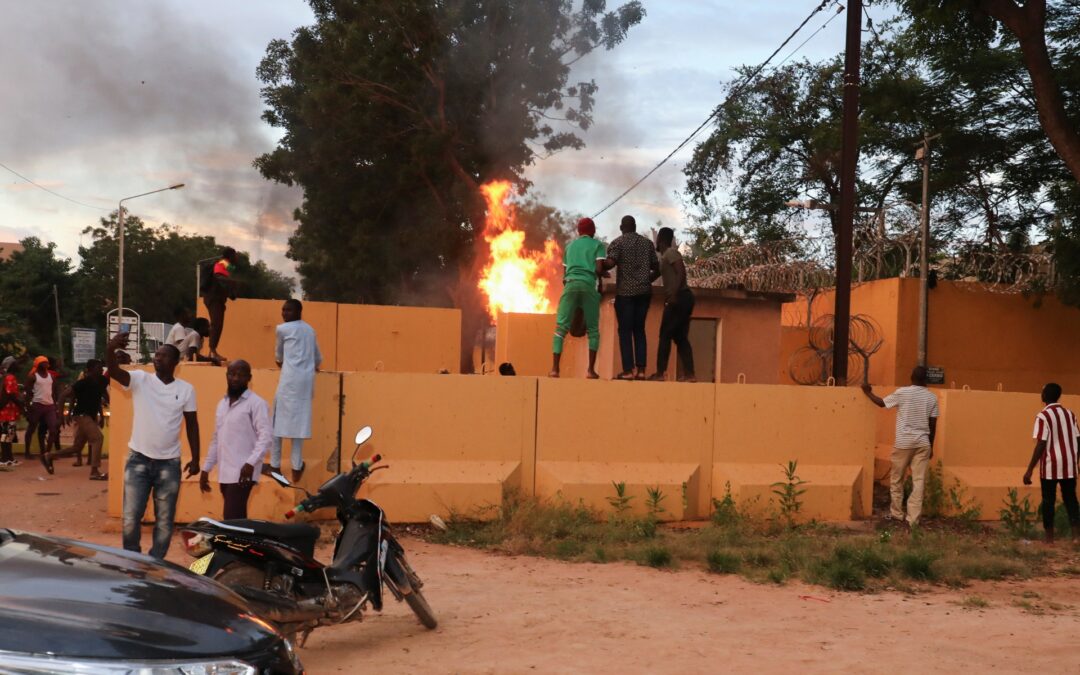 Security forces have fired tear gas at dozens of rock-throwing protesters outside the French embassy in Burkina Faso’s capital, as unrest simmers in the West African country following its second coup this year.

Supporters of Burkina Faso’s coup leader Captain Ibrahim Traore had gathered outside the building in Ouagadougou on Sunday, a day after he accused the deposed military leader Paul-Henri Sandaogo Damiba of hiding out at a French base to plot a “counteroffensive”.

With French troops watching from the roof, the protesters set fire to barriers outside and lobbed rocks at the structure when the tear gas volleys were fired.

The latest spasm of violence to convulse Burkina Faso began on Friday, when junior military officers toppled military leader Damiba, accusing him of failing to quell attacks from armed groups linked to ISIL (ISIS) and al-Qaeda. Damiba had come to power in a January coup.

In a statement read out on national television on Saturday and signed by Captain Traore, the country’s new leader, the officers said Damiba “is believed to have taken refuge in the French base at Kamboinsin in order to plan a counteroffensive to stir up trouble in our defence and security forces”.

Later on Saturday, Damiba rejected the allegations that he was at a French base but provided no further details about his whereabouts.

France, which colonised Burkina Faso in the past, on Saturday denied “any involvement” in the coup or that “Burkinabe authorities have been hosted or are under the protection of the French military”.

“The camp where the French forces are located has never welcomed Paul-Henri Sandaogo Damiba, nor has our embassy,” the French foreign ministry said in a statement.

It marked the second coup this year in Burkina Faso and the latest in the Sahel region, much of which is battling a growing military operation by armed groups.

“There has been international condemnation from France, the United Nations, the African Union, and the West African body ECOWAS – all calling for soldiers to return to their barracks,” said Al Jazeera’s Nicolas Haque, speaking from Dakar in neighbouring Senegal.

There have also been mounting protests in support of the coup plotters, he added. Protesters marched in Ouagadougou carrying the Russian flag, believing that Moscow can bring victory to the Burkinabe army that is facing setbacks on the battlefront.

In a written statement on the presidency’s official Facebook page, Damiba urged his rivals “to come to their senses to avoid a fratricidal war that Burkina Faso doesn’t need”.

The general staff of Burkina Faso’s army dismissed the coup as an “internal crisis” within the military and said dialogue was “ongoing” to remedy the situation.

Damiba himself came to power in a coup in January, installing himself as leader of the country’s 16 million people after accusing elected president Roch Marc Christian Kabore of failing to beat back armed fighters.