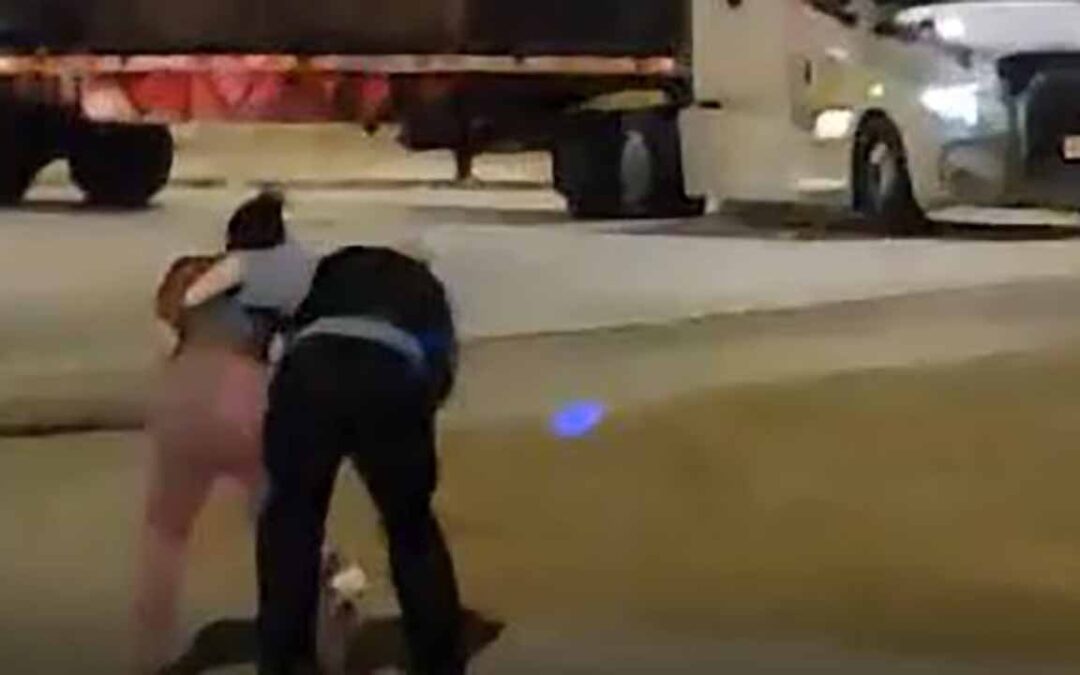 Chicago police are investigating a physical encounter between a White officer seen in several cellphone videos approaching and grabbing a Black woman walking her dog after dark near a beach.

The Chicago Police Department said Sunday it was “aware of a video circulating on social media” regarding an incident involving an officer and a woman walking her dog at North Avenue Beach. The department said it “promptly referred” the matter to Chicago’s Civilian Office of Police Accountability (COPA), the civilian oversight agency, to investigate the matter further.

Asked about the incident at a press conference Monday, Chicago police Superintendent David Brown said he has not made a decision on whether or not to strip the officer involved of his police powers or place him on administrative duty pending further investigation. Brown said there is body camera footage of the incident, and COPA was just initiating contact with the woman involved and has yet to interview the officer.

“We don’t have an update. Apparently there was a closure of that area of the beach, and then that proceeded the interaction. We don’t yet know what was done or said,” the superintendent said. “All we know is the person was not arrested. And yet the officer had, obviously you’ve seen the interaction on video. I don’t need to describe that. We’ll obviously wait for COPA’s investigation. Obviously, this is something viral on video, so I just ask the public to allow COPA to do its job in getting to the bottom of what happened.”

Brown added that he awaits additional briefings from the BIA, Bureau of Internal Affairs. He said COPA will ultimately determine whether any police policies were violated and make any recommendations to his office regarding possible disciplinary measures.

The Chicago-based firm, Saulter Law P.C., identified the woman as Nikkita Brown and categorized the incident as “an obvious case of racial profiling.”

The unnamed officer approached Brown at 12:12 a.m. Saturday because she was in Lincoln Park, near the lakefront, walking her dog after the park was already closed, Brown’s attorney, Keenan J. Saulter, said in a statement. The firm also released three separate cellphone videos of the incident.

The first video, recorded by Brown herself, begins with the officer telling her he will put his camera on too, as he appears to adjust his body camera, to “make this an official incident.”

“That’s fine,” the woman tells the officer, as he walks from his police cruiser toward her.

“Please respect my space. It’s COVID,” she says. “You do not have a mask on.”

“I don’t need a mask, I’m outside,” the officer says, appearing to still come closer.

A second video, which is two minutes and 17 seconds long and appears to be filmed by a bystander inside the front of a tractor trailer parked at the beach, shows the officer walk across the parking lot and toward the woman as she backs away from him with her leashed dog. She proceeds to walk across the lot away from him, as the officer points with both hands gesturing for her to leave.

‘I DARE YOU’: MARINE RESIGNS IN EMOTIONAL VIDEO AFTER DEMANDING ACCOUNTABILITY

The woman stops and turns as the two stand face to face in the clip. She is looking down on her phone, as the officer suddenly grabs her and a struggle ensues. The woman shrieks for the officer to let go, as she loses her flip-flops and her phone falls to the ground during the encounter.

She remains holding her dog’s leash until the officer releases his hold. She picks up her belongings and the two appear to exchange final words until they walk in opposite directions away from each other.

A third clip released by the law firm shows the struggle between the woman and officer after the physical encounter already began. The woman is heard yelling as the struggle continues, as bystanders standing across the park yell, “Hey, watch the dog” and “Hey, chill out,” among other comments.

“This is Chicago,” the person recording adds.

Brown’s attorney contends that she immediately went home and dialed 911, and a sergeant came to her home and took a police report. Her attorneys also argue that from Brown’s initial engagement with the officer at the park, she advised him she and her dog were leaving.