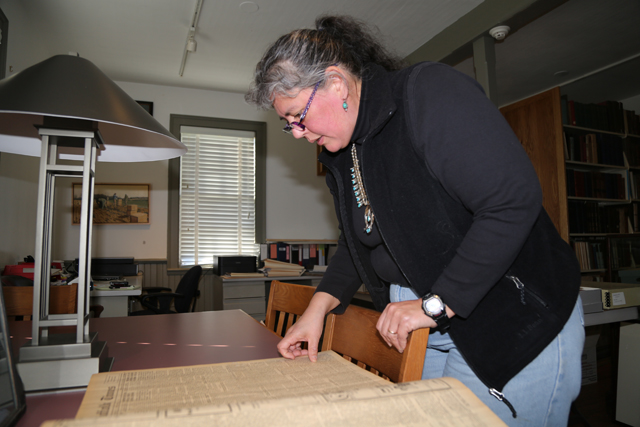 Two-and-a-half years ago, three people who are serious about local history got together to tackle a subject few before them had considered important: the history of slavery on the North Fork.

In that amount of time, the researchers — Riverhead historian Richard Wines, whose roots on the North Fork go back to the 17th century; Southold Town historian Amy Folk, whose focus includes broadening the story of Southold’s beginnings; and Sandi Brewster Walker, a specialist in African American history and genealogy and the region’s Indigenous past and who is a member of the Montaukett Nation — have learned enough to all but rewrite the story of the past.

The group, called the North Fork Project, will present its findings at 7 p.m. Wednesday, Nov. 16, at the Jamesport Meeting House. The meeting is open to the public. The event is free, but the researchers encourage donations to support the project.

Separately, all three had researched the issue of slavery on the North Fork — when it began, how extensive it was, where the enslaved came from, and how long it lasted. Together, however, they have made extraordinary inroads into a long-ignored chapter of the region’s history.

Early in the project, Jackie Dinan, who is researching a book about former Southold Town historian Wayland Jefferson, contributed some of her deep research on the subject to the North Fork Project. In many ways, the project is an extension of the Plain Sight Project, which was started on the South Fork by East Hampton Star publisher David Rattray and is pursuing similar research. The databases of both projects will be merged and accessible through the Plain Sight web portal.

With funding from a local foundation, the North Fork Project team added Jaclynkelli Kronemberg as an intern to help with the databases.

“Over the ensuing two and a half years, the team has assembled a database with over 1,700 records pertaining to the enslaved, free, and people of color — including the Indigenous peoples who were here before us — who lived on the North Fork,” said Mr. Wines.

“The team gleaned this partly from church records of baptisms, marriages and deaths. Additional information came from town records both in Riverhead and Southold, from early enumerations and from federal census returns after 1790,” Mr. Wines said. “We have also found information tucked into wills, inventories, account books and 19th-century newspaper articles held by local historical societies and the Suffolk County Historical Society.”

As the public will learn on Nov. 16, the first enslaved people were brought to Shelter Island, then part of Southold Town, in 1652. The Sylvester family enslaved them; they were brought from plantations the family owned in Barbados, where treatment of the enslaved was brutal. An early Southold resident named Benjamin Moore — other town residents were also involved — was engaged in the slave trade in Barbados.

“The first documented reference to a slave on the North Fork is in the 1684 will of John Budd 2nd, a Southold farmer who gave his ‘negro woman Catherine and her child’ to his wife, Mary,” Mr. Wines wrote.

The group, however, believes the first slaves were brought to the North Fork decades before this documented reference. Records show there were 27 enslaved people in Southold in 1686 and 41 by 1698. It is certain there were slaves on the North Fork during the time of the Rev. John Young, the founding pastor of Southold, whose group is said to have landed on the bayside in 1640.

The book “History of Southold,” published in 1881, cites only the “early settlers” of the town and does not mention either the institution of slavery that took root here or any names of the enslaved. Only the names of the so-called “founding families” earned mentions. Nor does the book mention the Native people, or anything about their lives or how they lived once the English came and removed them from their land.

“Despite all our sleuthing, we can only find a handful of references to Indians in Southold -— generally pushed onto small bits of marginal land — and none at all in what is now Riverhead,” Mr. Wines said.

The Project estimates that between the founding of Southold (which included all of what is now Riverhead) in 1640 and the abolition of slavery in 1828, some 550 enslaved people were here. Importantly, the Project can identify 350 by name.

In 1776, the year the colonies declared their independence from Britain with the rallying cry of freedom, there were some 234 enslaved people here. Prior to that year there are but a handful of records in which a local family freed one of its enslaved.

“Moral qualms do not seem to have come into consideration until after the Revolution,” Mr. Wines said. “This is what makes it so important for us to unearth this history, to acknowledge the role that slavery played in our communities and to ask what this history means to us today.”

← How to Advocate for Eligible Incarcerated Voters to Cast Ballots – Southern Coalition for Social Justice ← ‘I Didn’t Think Anyone Would Care’: Hundreds of Women Sue New York Prisons for Sexual Assault