Countering the narratives that are being created to defend Chris Schurr, the cop who killed Patrick Lyoya 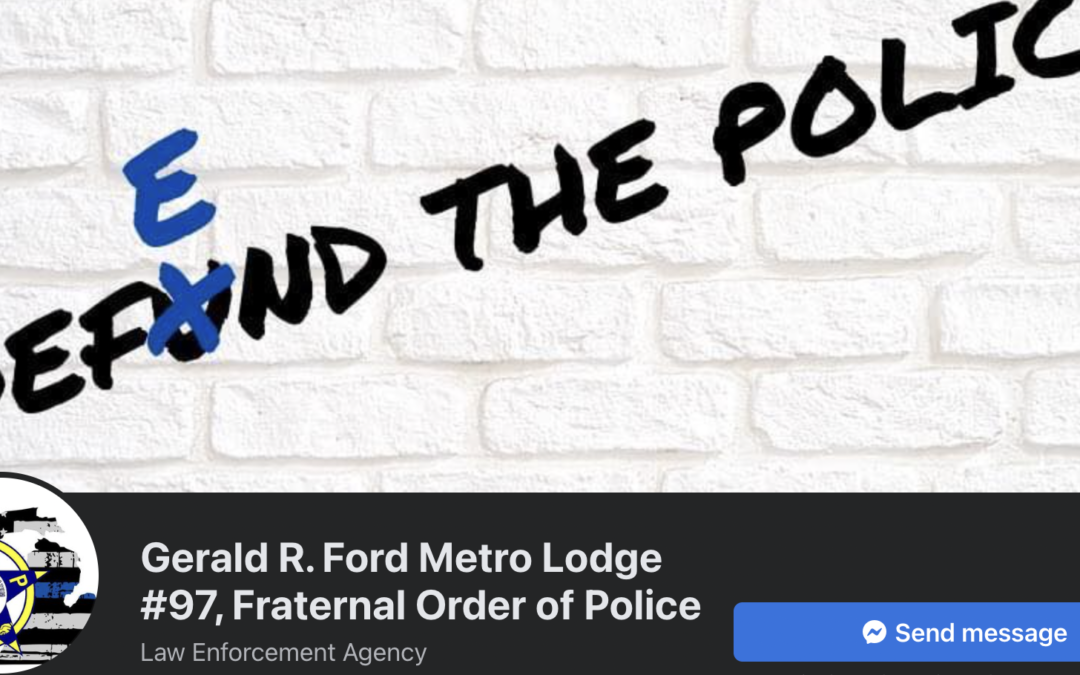 The Grand Rapids Chief of Police finally decided to release the name of the cop who shot Patrick Lyoya in the back of the head and killed him on Monday, April 4.

The officer’s name is Chris Schurr, although many activists have known this for over a week, after making some determinations based on the video that was released the week after Patrick Lyoya was shot and killed by Chris Schurr.

There are already numerous narratives that have been created since Schurr’s name has been released. I would like to address three of them.

The first narrative comes from the description used in the GoFundMe for the cop who murdered Patrick Lyoya. The most important part of that narrative reads:

Being involved in an incident like this is very traumatic. I have been trying to help the family navigate this difficult time and meet their basic needs as their safety has been compromised. Unexpected living expenses have come up that is related to their security. Many have reached out to ask how they can support this officer and his family. With the media release of Officer Schurr’s name, this page was created as a place for people to reach out and help in a tangible way.

The most significant request at this time is prayer. Prayer for peace. Prayer for all affected by this tragic incident. Prayer for the men and women still working the streets. Prayer for those investigating the incident and prayer for our elected officials. Funds donated will go towards expenses related to maintaining the family’s safety and security and will deposited directly to them.

It is instructive that this narrative completely omits Patrick Lyoya’s name and the fact that Chris Schurr shot him in the back of the head while he was face down on the ground. Like most of the government languages that has been used, this narrative calls what happened “an incident.” The narrative then center’s the “safety” of the very person who murdered Patrick Lyoya, without any acknowledgement of how Patrick’s safety was brutally violated. Lastly, there is a request for prayer of peace, but the GRPD and the Michigan State Police and Grand Rapids City officials are the only ones directly mentioned. Again, Patrick Lyoya’s family is omitted, his friends, the Congolese community, the African American community and the larger activist community that has been in the streets for over two weeks now demanding justice.

A second narrative that has been created since the naming of Chris Schurr, is the one that appeared in an MLive article on Tuesday, April 26, with the headline, Patrick Lyoya’s troubles with police may have prompted his resistance to officer. This narrative seeks to create doubt in the public mind about what happened on April 4, when Officer Schurr shot Patrick Lyoya in the back of the head. Those who already zealously support the cops will use this as a justification for Chris Schurr deciding to shot Patrick Lyoya in the back of the head. This justification was affirmed in the article, where a former cop and now business agent for Police Officers Association of Michigan, Timothy Lewis says, “If he had just done what he was asked to do … he’d be in jail, but he’d be alive.” This is an ideological statement, since it is designed to say that the public should always obey whatever cops tell us to do. This point of view is what it means to live in a police state and we should not simply conform to the state’s demands that we blindly obey.

A third narrative is one that has surfaced in various forms, but lets look at what the Fraternal Order of Police, the Gerald R. Ford Metro Lodge #97 posted late Monday evening.

Officer Schurr is a public servant and servant of the Lord. He chose to minister to the people of Kenya and serve those less fortunate than him. Hardly the racist so many of the usual police haters try to portray him as. We doubt the media will do their due diligence in conducting any investigative journalism to seek out the whole true story, but we can only hope.

This post is borrowed from a friend and fellow GRPD officer.

Everyone, this is Chris. A lot of people are sharing pictures of him right now and are trying to portray him as an evil person. That is not Chris. The picture on the left is the day Chris was sworn into the police department, a smile all new police officers once shared. The picture on the right is when Chris was in Kenya getting sized for his wedding ring. For those that don’t know, Chris married the love of his life while on a missions trip. They had the opportunity to commit their lives to one another during a traditional Kenyan ceremony and from all of Chris’ stories, it was truly a magical day for them.

That’s the type of guy Chris is; someone who serves the Lord unconditionally and does it with a smile on his face. Chris recently had to make a decision that all as officers hope and pray never have to make. Because Chris made it,the world is trying to make him out to be a monster. Since the media and haters want to try and overwhelm Facebook with terrible still shots of Chris, and unbelievably disgusting lies, I wanted to take a second to add a little bit of truth to your feed, even for a second.

What this narrative seeks to do is to humanize Chris Schurr, despite the fact that he shot Patrick Lyoya in the back of the head, while Patrick was lying face down on the ground. Like most cop apologists, this narrative believes that Chris Schurr is a “servant of the Lord.” The narrative also uses words like unconditional, a smile on his face. The narrative goes on to state, “He chose to minister to the people of Kenya.” Chris Schurr was on a mission trip with his church, the Corinth Reformed Church in Byron Center. This church is a White church, which truly believes that mission work is a wonderful thing. Now, let’s be honest, Christians from the US going to places like Kenya to serve the less fortunate is nothing more than a form of White Saviorism. One could certainly argue that mission work is inherently a form of propaganda designed to get people to abandon their own spiritual traditions and embrace a genocidal, colonialist and White Supremacists version that so many Christians in the West practice. (See Native scholar George Tinker’s book, Missionary Conquest.)

Mission work also generally ignores the fact that countries like Kenya suffered for a long time from European Colonialism and now US Corporate extractivist practices. The people that Chris Schurr was doing his mission work with in Kenya were not “less fortunate,” they were people living under generations of colonial rule, with a foreign power dictating their daily reality.

These are just three narratives that are being created to defend the killer cop Chris Schurr. We need to not buy into any of these narrative, rather we need to resist them and create our own narratives that center the life of Patrick Lyoya and dismantle the institution of policing in Grand Rapids and across the US.