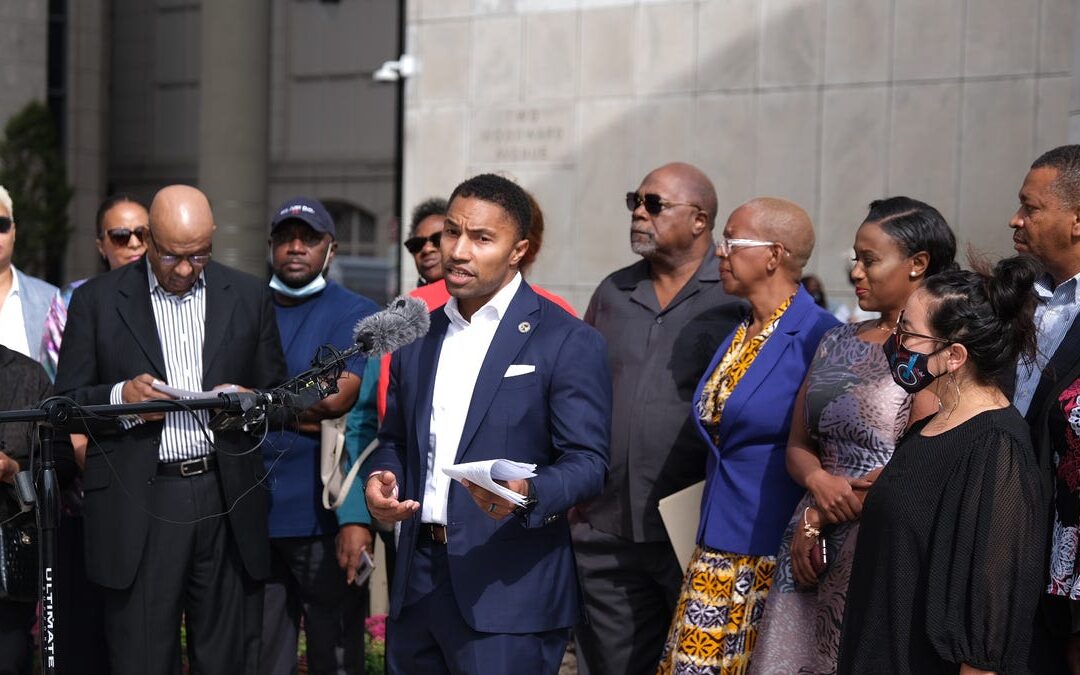 Detroit — Democratic lawmakers spoke out Tuesday against proposed maps for new voting districts in Michigan that they said would eliminate majority Black districts and make it difficult for Black legislators to be elected in Detroit.

They were joined by community activists and faith leaders at a press conference in front of the Spirit of Detroit statue in Detroit, calling on residents to “show up, show out and speak up” at planned public hearings on the maps beginning Oct. 20 to demand district maps that more accurately reflect communities.

“It needs to be done because districts that are not majority Black have by and large part not elected majority Black individuals,” said state Sen. Adam Hollier, D-Detroit, noting there are only three Black members of the Legislature who represent non-majority Black districts.

“The citizens’ redistricting commission has gone from 17 majority Black districts, primarily based in the city of Detroit, to zero,” said Hollier.

The lawmakers voiced concerns the day after Michigan’s redistricting panel released its first 10 proposed draft maps for the state’s future voting districts, marking the end of more than seven weeks of map drawing.

Commissioners are expected to submit additional individual maps in each category through Thursday. Some of those maps could address the concerns in Detroit.

The process faced intense scrutiny from the public and both Democrats and Republicans. It required that the members of the citizen commission receive a crash course in balancing population, races and partisan fairness in their maps.

Public hearings will run through late October, after which the commission will vote on final drafts Nov. 5 then trigger a 45-day period for public comment.

“It is important that Black people lead on Black issues,” Hollier said Tuesday, before introducing state Rep. Tenisha Yancey, D-Harper Woods, the Detroit Caucus Chair, who spoke about the importance of having members of communities represent them in local, state and federal office.

“When we don’t have people who represent us, who have experiences like ours, then we have legislation and bills and laws that affect us every single day that don’t reflect us,” Yancey said.

Former state Rep. Sherry Gay-Dagnogo on Tuesday called the proposed voting districts in the new maps “disrespectful” and warned that they might lead to having no Black representatives in the Michigan Legislature.

The maps require urgent action from residents, said Rev. Wendell Anthony, president of the Detroit Branch of the NAACP. Leaders of the NAACP, the League of Women Voters and other groups on Monday urged commissioners to reconsider the proposed maps.

“We cannot afford to lose our democracy,” Anthony said. “We cannot afford for the pain, the blood, the sweat, the tears that we have fought and given and shed in the soil of this land to be taken from us by folk who want to draw a map that denies us.”

Added state Rep. Mary Cavanagh, D-Redford Township: “From what I’m seeing, it’s just putting every Detroiter against a suburb. At the end of it, there could be a possibility that Detroit’s represented by someone that’s not from Detroit.”

“I think it is really going to be negative on people of color and minority interest just because it’s really separating them,” said Cavanagh, whose district includes northwest Detroit and Redford Township, the latter of which might be split in half per some of the maps.

Commissioners must consider several criteria in drawing district maps which can be loosely defined and often in opposition to each other. Some qualifications include compliance with the Voting Rights Act, communities of interest and partisan fairness.

In 2019, a federal judicial panel found the state’s current maps were gerrymandered to “historical proportions” and that the current boundaries diluted the weight of Democratic voters by “packing or cracking” them into certain districts.

Hollier has noted the commission has “done a really good job of responding to the feedback of people who testify” and now Detroiters “need to stand up.”

Hollier’s concerns are likely to continue playing out in the coming days, as the public urges a balance between keeping communities together and avoiding packing in certain districts, Adrian Hemond, a Democrat and CEO of the consulting firm Grassroots Midwest in Lansing, has noted.

“I don’t think it will be just Detroit,” Hemond said. “There’s this tension between creating competitive districts and keeping cities whole.”