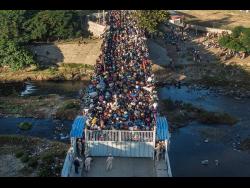 The Dominican Republic says it “profusely rejects” criticism of its crackdown on Haitian migrants from a growing number of countries and human- rights agencies.

Dominican authorities have ramped up border enforcement and deportations of Haitians, saying such actions are crucial to national security amid intensifying turmoil in the neighbouring country due to a gang blockade of fuel supplies and a cholera outbreak.

The authorities say they deported 43,900 migrants, largely Haitians, between July and October. In September and October alone, deportation figures shot up by about 50 per cent.

The government’s actions have sparked heavy criticism in recent weeks from Haiti, the United Nations human-rights chief and the United States.

On Saturday, the US Embassy in the capital of Santo Domingo sent out a warning, saying Dominican migration authorities “have carried out widespread operations” to detain largely Haitian migrants who they believe are in the country illegally.

Headlines Delivered to Your Inbox

“There are reports that detainees are held in overcrowded detention centres, without the ability to challenge their detention and without access to food or toilets, sometimes for days, before being released or deported to Haiti,” the embassy wrote.

The embassy also warned that the government’s actions could pose a problem for darker-skinned Americans and African-Americans travelling in the Dominican Republic.

Unlike the UN and Haiti, however, the US did not explicitly call for the country to halt deportations. US President Joe Biden’s administration has defended its own practice of deporting and expelling Haitian migrants arriving at its southern border, despite heavy criticism from human-rights organisations.

The Dominican Ministry of Foreign Relations lashed back at the criticism on Sunday, saying the American government had “no evidence” of any sort of systematic human- rights violations. It also decried what it said was a lack of international support to handle the migration from Haiti.

“The Dominican government never could have imagined there would be such a harsh insinuation made about our country,” the ministry wrote, “much less from an ally that has been subject to accusations of xenophobic and racist treatment of migrants, including in parts of its own population.”

Tensions fuelled by migration have simmered for years between Haiti and the Dominican Republic, which share a 240-mile (390-kilometre) border on the island of Hispaniola. But they have only deepened since the 2021 assassination of Haitian President Jovenel Moïse, which thrust an already-crisis-stricken Haiti into chaos.

Since then, deportations from the Dominican Republic have ramped up and the country’s government has increasingly militarised its border, even beginning construction of a border wall.

Last week, President Luis Abinader called the UN human-rights chief’s recent demand for the end of the deportations “unacceptable and irresponsible”. He said his country “has been more affected” by Haiti’s problems and steady migration and “more supportive than any other country in the world”.

“You can’t ask anything more from the Dominican Republic. … We’re going to continue the deportations, and next week we’re going to increase them,” he said.

Foreign Affairs Minister Mélanie Joly accused the trio on the weekend of helping gangs undermine Haiti’s current government, and called on international partners to follow Canada’s lead. She made the announcement at a two-day Francophonie summit in Tunisia.

The Caribbean country is paralysed by gang warfare.

“Our goal is to make sure that these people that are profiting from the violence, that are part of a corrupted system, are facing accountability,” she said.

“These sanctions will have a dissuasive impact,” he said in French, while seated on Saturday between Prime Minister Justin Trudeau and Joly.

The country is seeing rising violence and increasingly brazen attacks by Haitian gangs that have grown more powerful since the July 2021 assassination of President Jovenel Moïse. The chaos has spurred on a huge migratory exodus from the island.