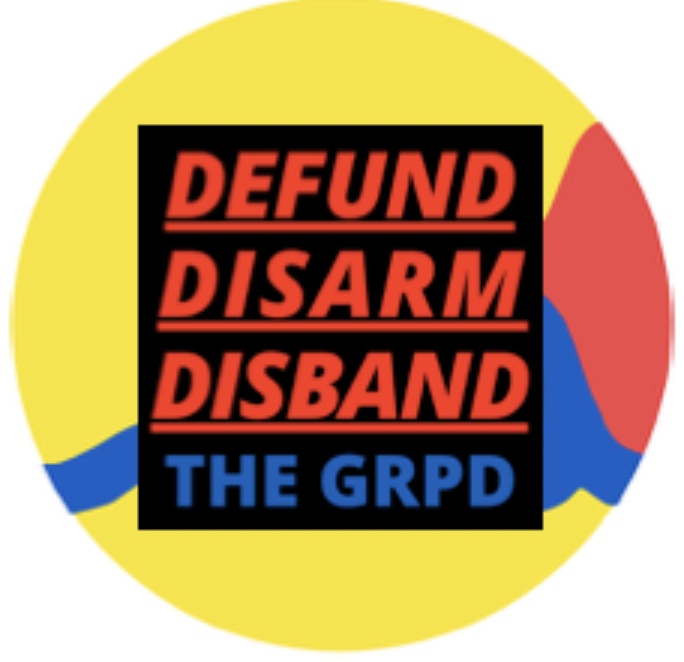 The City of Grand Rapids will be discussing and voting on the proposed 2023 Budget in the coming days and weeks, beginning on May 10. There is already a proposed budget, with specific funding allocations already laid out by City Manager Mark Washington on May 3rd.

This process has been highly questionable, in regards to authentic public input, as the community has experienced, specifically with calls for a reduction in the funding for the Grand Rapids Police Department.

We thought it would be useful to provide a timeline of the work of the group Defund the GRPD, along with other articles that GRIID has posted since June of 2020, when the initial calls for Defunding the GRPD began in response to the national and Grand Rapids uprising against the police killing of George Floyd in late May of 2020.

June 2, 2020 – We wrote a piece about why there needs to be a Defund the GRPD movement in Grand Rapids, where we talked about the City Budget and brief timeline since 2016 of GRPD actions against Black and Brown residents.

June 9, 2020 – On this date we wrote a piece that provided information on which Grand Rapids-based candidates – City Commissioners, County Commissioners, those running for County Prosecutor, judicial seats and state offices – had received funding from the Grand Rapids Police Officer’s Association PAC. We also stated that a Defunding movement would call for people to not vote for those who took police union funding.

June 11, 2020 – We wrote an article looking at the $54 million annual budget for the GRPD and how that money could be used to benefit the Black community in Grand Rapids, in what the Vision for Black Lives refers to as a divest/invest strategy.

June 15, 2020 – On this date we wrote about what to would look like to not have the GRPD. We looked at numerous resources and examples of community safety that did not rely on cops.

June 16, 2020 – The Movement for Black Lives has recently created a wonderful toolkit for communities that are considering a campaign to defund their police. This toolkit is a great resource and needs to be read by everyone before they make their own declarations about what defunding the police really means.

June 17, 2020 – On this date we wrote a piece about how the City of Grand Rapids changed the City Charter to institutionalize the 32% of the budget funding for the GRPD, which took place in 1995.

July 8, 2020 – After weeks of pressure from community groups to Defund the GRPD, 3 City Commissioners were set to propose defunding the GRPD to the 32% City Charter mandated minimum. However, the City Manager and the City Attorney stepped in and prevent such a vote, making the claim that the City Commission did not have the legal authority to do so. City Manager Mark Washington did say that they would revisit possible reduction in GRPD funding later that year.

July 13, 2020 – The local news media acts as a conduit for the GRPD, by calling actions of local activists calling for the GRPD to be defunded as “vandals.”

July 29. 2020 – The City of Grand Rapids announced that there would be a new Strategic Plan for the GRPD in August, but the announcement made it clear that there is no way for the GRPD to reduce their funding, using recent gun violence as the main justification.

September 24, 2020 – GRPD planned for another riot during a protest to honor Breonna Taylor in Grand Rapids.

November 17, 2020 – Defund the GRPD and other community groups stopped the efforts of the City of Grand Rapids to use Cares Act funding from Kent County to purchase ShotSpotter technology that the GRPD wanted.

December 2, 2020 – A member of the Grand Rapids Power Structure sends the City Commission a letter to oppose any defunding of the GRPD.

December 27 & 30, 2020 – The GRPD police union and supporters increased their efforts to oppose any sort of defunding of the GRPD, making it clear that the efforts of Defund the GRPD were a threat to their institutionalized power.

During the later part of 2020 and the beginning of 2021, Defund the GRPD was also doing work that was less known, such as:

March 9, 2021 – Justice for Black Lives activists were targeted and arrested by the GRPD during a protest, showing how the GRPD engages in selective enforcement of local ordinances.

March 31, 2021 – GRPD rolls out their Operation Safe Neighborhood plan, which involved the use of helicopters terrorizing people in mostly Black and Brown neighborhoods. This so-called community policing approach, is nothing more than a re-packaging of what the GRPD has done for decades.

April 6, 2021 – Local news media talk to GR City Commissioners about the police budget, where they all pretty much oppose any defunding of the GRPD.

May 3, 2021 – Grand Rapids City Officials hold a 1 hour visual town hall to talk about the 2022 City Budget, which included the budget for the GRPD.

May 9, 2021 – GRPD arrests the wrong Black man who was on the way to a family funeral, but was charged with resisting arrest.

May 19, 2021 – City Commission hearing on 2022 Budget once again demonstrated how much contempt they have for public input, especially input that challenges their power.

We are only including the efforts that were put forth to defund the GRPD up to the 2022 Budget discussion/meetings in May of 2021. There has obviously been more that has transpired in the past year, culminating in the GRPD killing of Patrick Lyoya, but the point of this post was to show how much had been done before last year’s City Budget vote and the push back from City Officials and the GRPD.