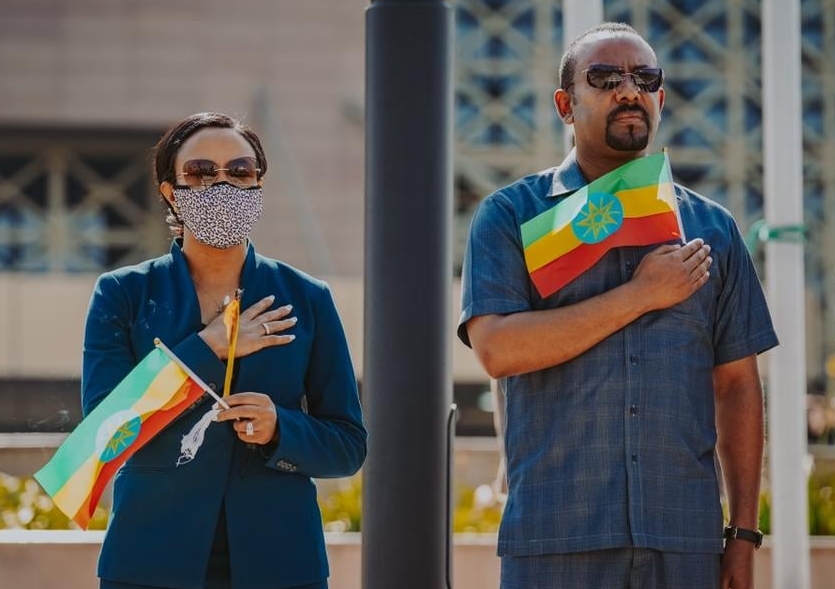 Prime Minister Abiy Ahmed has told Ethiopians they must be ready to make “sacrifices” to save the country from rebel forces, as the United States ordered non-emergency government employees to leave Ethiopia

The yearlong fighting between federal government troops and Tigrayan rebels, who are threatening to march on the capital, Addis Ababa, has intensified in recent days.

“There are sacrifices to be made, but those sacrifices will salvage Ethiopia,” Abiy said on Twitter on Saturday.

“We have seen the tests and obstacles and it made us stronger,” he continued, adding: “We have more allies than the people who turned their backs on us.”

Abiy’s comments came a day after nine groups said they would join forces in an alliance built around the Tigray People’s Liberation Front (TPLF), with the aim of removing Abiy’s government by force or negotiations.

The government has dismissed the coalition formation as a “publicity stunt” and said most of the groups involved do not have any traction.

“For us, Ethiopians, dying for our sovereignty, unity and identity, is an honour. There is no Ethiopianism without sacrifice,” the government’s communication service said on Twitter.

Meanwhile, the US embassy in Addis Ababa ordered the departure of its non-essential diplomats on Saturday, a day after advising all US citizens to leave Ethiopia “as soon as possible” – as have several other embassies, including those of Saudi Arabia, Sweden and Norway.

“Incidents of civil unrest and ethnic violence are occurring without warning. The situation may escalate further and may cause supply chain shortages, communications blackouts, and travel disruptions,” the US embassy said on its website on Saturday.

It came after the US special envoy for the Horn of Africa, Jeffrey Feltman, was seemingly unable to strike a breakthrough in his bid to bring an end to the fighting during a visit this week to Addis Ababa.

While regional and international efforts are under way amid calls for an immediate cessation to hostilities and talks for a lasting ceasefire, a diplomatic source told Al Jazeera that Ethiopian government officials and the US envoy were unable to agree on a path to solving the conflict.

The source said Ethiopia rejected Feltman’s proposal to hold unconditional negotiations with the rebels, as the government considers the TPLF a “terrorist” group and demands the immediate withdrawal of its fighters from the Amhara region without conditions.

The same source added that the US and Ethiopian sides differed over the nature of the negotiations, with the latter insisting it was the one that determined this without the interference of external parties.

Last weekend, the TPLF said it had taken two strategic cities in Amhara, where its fighters had advanced after retaking their Tigray bastion in June. It said on Wednesday it had reached the town of Kemissie in Amhara, 325km (200 miles) northeast of the capital.

The TPLF added it was running “joint operations” with another rebel group, the Oromo Liberation Army, and indicated it might advance on Addis Ababa. The Tigrayan forces say they are pressuring Ethiopia’s government to lift a deadly months-long blockade on their region of around six million people, where basic services have been cut off and humanitarian food and medical aid are denied.

“If marching to Addis is what it takes to break the siege, we will,” said TPLF spokesman Getachew Reda.

The Ethiopian government, which on Tuesday declared a nationwide state of emergency, has denied any major rebel advance or threat on the capital, promising to press on to victory in “an existential war”.

Abiy’s spokeswoman Billene Seyoum on Friday accused the rebels of spinning “an alarmist narrative that is creating much tension among different communities, including the international community”.

“This information warfare and this propaganda that they have been propagating is giving a false sense of insecurity,” she added.

Abiy, winner of the 2019 Nobel Peace Prize, sent troops into Tigray in November 2020 to topple the TPLF, which he accused of having attacked military bases. Weeks later, he declared a victory.

By late June the rebels had retaken most of Tigray and expanded into the neighbouring regions of Afar and Amhara.

The brutal conflict has killed thousands and displaced more than 2.5 million. The United Nations has said up to seven million people in the regions of Tigray, Amhara and Afar need help, including five million in Tigray where some 400,000 people are estimated to be living in famine-like conditions.

The fighting has also exacerbated ethnic rivalries, in particular on social media where calls for war and hatred have been rife.

Twitter announced on Saturday that it had temporarily disabled its “trends” section, which groups the most viral tweets on a subject, for Ethiopia.

The social media giant said it was “focused on protecting the safety of the conversation on Twitter,” adding that “inciting violence or dehumanising people is against our rules”.

Facebook’s parent company Meta said on Wednesday that it had deleted a post by Abiy that called for Ethiopians to “bury” the rebels.

Following Tuesday’s declaration of the six-month emergency, reporters citing lawyers have said many Tigrayans had been detained.

The authorities say they are only targeting TPLF supporters.