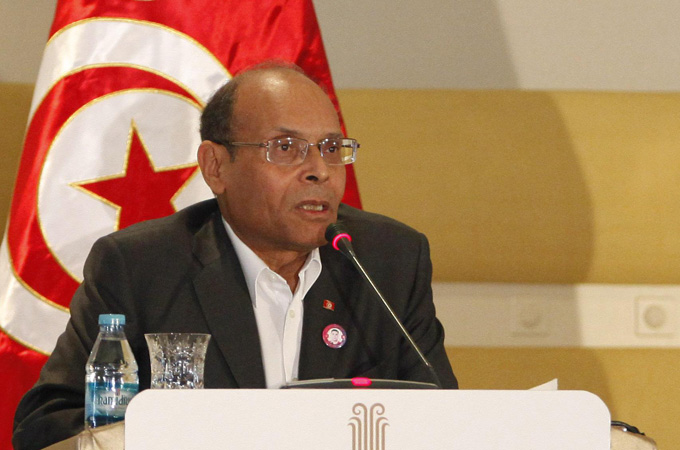 Former Tunisian President Moncef Marzouki has called on Tunisians to stage protests on Sunday against the power grab by the country’s president, Kais Saied.

“I call on all Tunisians to rally on Sunday in defence of the constitution, democracy, freedom and national sovereignty,” Marzouki said in a video posted on his Facebook page.

“Presence should be strong at this protest. I call on you all to put aside your political affiliations and take part,” he added. “I have never seen Tunisia in this state it is in today. It’s time to act.”

In July, the president plunged Tunisia into a constitutional crisis by suspending the elected parliament, dismissing the prime minister and assuming executive authority.

Last month, he brushed aside much of the constitution to say he could pass legislation by decree, casting into doubt Tunisia’s democratic gains since its 2011 revolution that triggered the Arab Spring revolts.

While he insists his “exceptional measures” are meant to “save” the country, critics accuse him of orchestrating a coup.

‘Sovereignty can be returned’

Marzouki’s call came as a protest movement known as Citizens Against Coup called for demonstrations on Sunday against Saied’s move to control all parts of the state.

Marzouki suggested the resignation of Saied and parliamentary Speaker Rached Ghannouchi and the convention of the assembly as a way out of the current political crisis in Tunisia.

“Free and transparent early elections can be held after a 45-day transitional period through which sovereignty can be returned to the people,” he said.

The majority of parties in Tunisia reject Saied’s power seizure, with some accusing him of orchestrating a coup against the constitution.

Other parties, however, have supported Saied’s decisions in light of the political, economic, and health crises the North African country is facing.

Earlier this month, thousands of supporters of Saied rallied in the capital to show their backing for his suspension of parliament and promises to change the political system.

The demonstration in central Tunis was called in response to protests against Saied’s actions over the previous two weekends in the same location.

Many Tunisians blame those ills on a corrupt, self-interested political elite, and they see Saied, an independent elected in 2019, as a champion for the people.

Tunisia was previously seen as the only success story among Arab states in their efforts towards a democratic transition which witnessed popular revolutions toppling ruling regimes, including in Egypt, Libya, and Yemen.