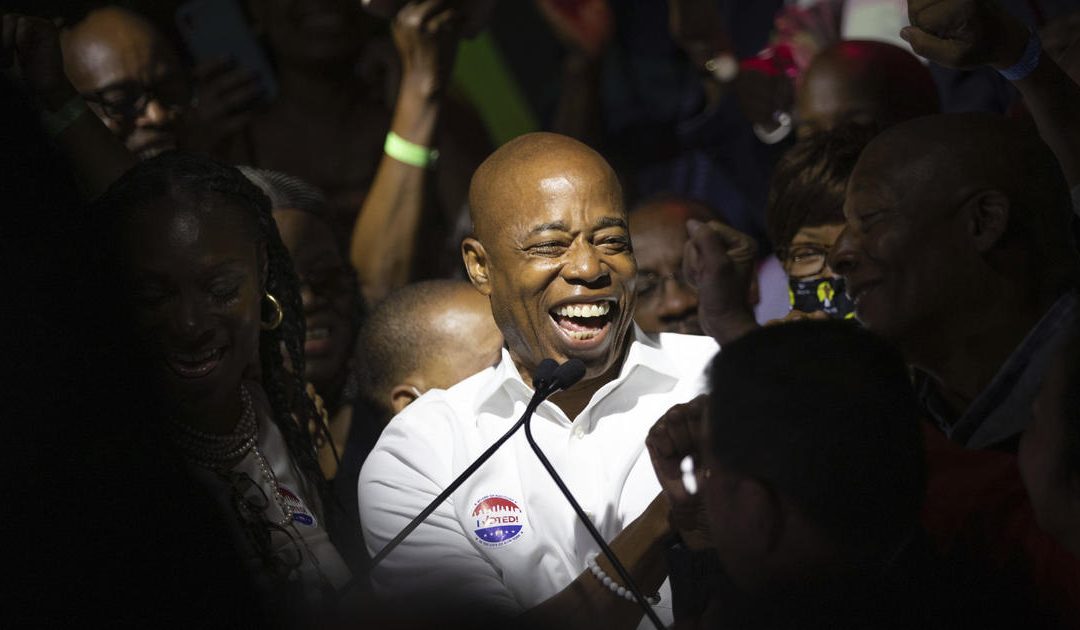 Democrat Eric Adams, a former captain in the New York Police Department and Brooklyn borough president, was elected the 110th mayor of New York City on Tuesday, becoming just the second Black mayor in the city’s history. He defeated Republican Curtis Sliwa for the position.

In his victory speech Tuesday night, Adams, 61, spoke about the significance of his win after growing up facing significant adversity. On his campaign website, he details how he and his five siblings were raised in Queens by a single mom who cleaned houses. At many times, he says, is family wasn’t sure if “they would come home to an eviction notice on the front door or food on the table.”

“For a young man from South Jamaica, Queens who grew up with all of the challenges that every New Yorker faces, tonight is not just a victory over adversity, it is a vindication of faith,” Adams said. “It is a proof that people of this city will love you if you love them.”

Democrat Eric Adams speaks to supporters after being elected as New York City’s second-ever Black mayor: “We are so divided right now, and we’re missing the beauty of our diversity…Today, we take off the intramural jersey and we put on one jersey: Team New York” pic.twitter.com/kC5tbg8q8D

Adams said his campaign was for “the underserved, the marginalized, the abandoned” and emphasized to his constituents, “I am you.”

“This campaign was for the person cleaning bathrooms, and the dishwasher in the kitchen who feels they are already at the end of their journey. It was for those who feel they were there, but forgotten,” he said. “…My mother cleaned houses. I washed dishes.”

And he recounted the story of how as a teen he was mistreated by police — an encounter that inspired him to join the force and try to bring change from the inside.

Adams also touched on what it was like growing up in poverty and dealing with a learning disability. Throughout his campaign, Adams has advocated for better educational support for dyslexic students, and has said that he did not learn about his own learning disability until “late in life.”

“There may be a young person out there right now that believes that they are not smart enough to go to college and to succeed. I did too,” he said. “But I overcame a learning disability and went to college and was able to obtain my degrees.”

It’s official — our five-borough, knock-every-door, reach-every-voter campaign was successful: We have won the race for Mayor of New York City!

This is my dream come true, and I couldn’t be more proud to represent the City that we all love as your Mayor-elect 🗽🍎

The victory for Adams marks just the second time in history that New Yorkers have elected a Black mayor. David Dinkins, the city’s first, was elected in 1989. He died last November at age 93.

Adams retired from the police force as a captain after 22 years and entered politics in 2006, winning a seat as a New York state senator. In 2013, he took office as Brooklyn borough president, a position he was the first African American to hold.

Adams harnessed his law enforcement background as a major talking point throughout his campaign, which comes a year after protests against police brutality and racial injustice erupted around the world, including in New York City.

In July, Adams told “CBS Mornings” that his experience, both as an officer and as someone who was “assaulted by police officers,” has helped him better understand the situation. However, Adams has also been criticized for saying that some controversial tactics, including “stop-and-frisk,” can help police officers on the job. He’s said he would not allow the practice to be misused as it was in the past.

“I became a police officer, I understand crime, and I also understand police abuse,” he told “CBS Mornings” after winning the city’s hard-fought Democratic primary. “And I know how we can turn around not only New York, but America. We’re in a terrible place, and we can turn this country, this city, around.”

Adams said he ran for mayor to “turn pain into purpose” as many feel they have been “betrayed” by leadership.

“My fellow New Yorkers, that betrayal stops on January 1,” he said. “We are going to make a difference.”