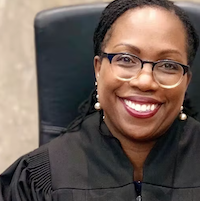 The report details Jackson’s record as a judge and past statements on a range of civil rights and constitutional issues, and how those would likely inform her work as a Supreme Court Justice. As Jackson aptly said “civil rights gains—from women’s rights to gay marriage—rely, in part, on the trailblazing work of black civil rights leaders, including black women.”

“The Supreme Court and its Justices are tasked with the immeasurably sacred duty of upholding the rights and liberties of all Americans—including, but not limited to, the constitutional rights of LGBTQ+ people, communities of color, and other marginalized populations,” said Joni Madison, Human Rights Campaign Interim President. “After a thorough and careful review of Judge Jackson’s legal record, on the bench and off, it is clear that she will uphold and honor the principles of equal rights for all and continue Justice Breyer’s legacy as a pioneer of equality. As such, the Human Rights Campaign is incredibly proud to support Jackson to be the newest Associate Justice of the United States Supreme Court. There is absolutely no question—she is an exceptionally qualified candidate for this appointment. Her confirmation to our highest court will be historic and another step toward ensuring that our justice system reflects the nation that it serves.”

Overall, Jackson’s record on the bench and as a practicing attorney reveals several significant and encouraging qualities that are relevant to the mission of HRC and to the LGBTQ+ community:

While Judge Jackson’s docket has not touched directly upon issues of LGBTQ+ rights, in other public remarks, she has highlighted the historical connections between LGBTQ+ rights and civil rights for other marginalized groups and rightly framed the Obergefell decision on marriage equality alongside Supreme Court precedents about constitutional protections involving privacy and interracial marriage. For the reasons outlined, HRC proudly supports Jackson’s nomination to the U.S. Supreme Court.

Jackson graduated from Harvard University and later attended Harvard Law School, where she was a supervising editor of the Harvard Law Review. She clerked for three federal judges (including Justice Breyer), worked in private practice, and served both on the United States Sentencing Commission and as a federal public defender in Washington, D.C. In 2013, the United States Senate confirmed her to serve as a judge on the U.S. District Court for the District of Columbia until she was again confirmed and elevated to the U.S. Court of Appeals for the D.C. Circuit in 2021. Now, she is the first Black woman to be nominated to the U.S. Supreme Court, adding significant racial, gender and professional diversity to our nation’s highest court.

The decisions made by the Supreme Court have established important legal precedents that impact the daily lives of all Americans. Over the past three decades, the LGBTQ+ community has benefited from several groundbreaking decisions from the Court, including Romer v. Evans, Lawrence v. Texas, U.S. v. Windsor, Obergefell v. Hodges and Bostock v. Clayton County. During that same period, the Court also handed down a number of rulings that are deeply problematic for civil rights and the public interest, for example, curtailing reproductive freedom and voting rights, in Burwell v. Hobby Lobby and Shelby County v. Holder, respectively. Notably, many of these rulings – both positive and negative – were decided by razor-thin margins, highlighting the importance and magnitude of the responsibility handed to each individual justice.