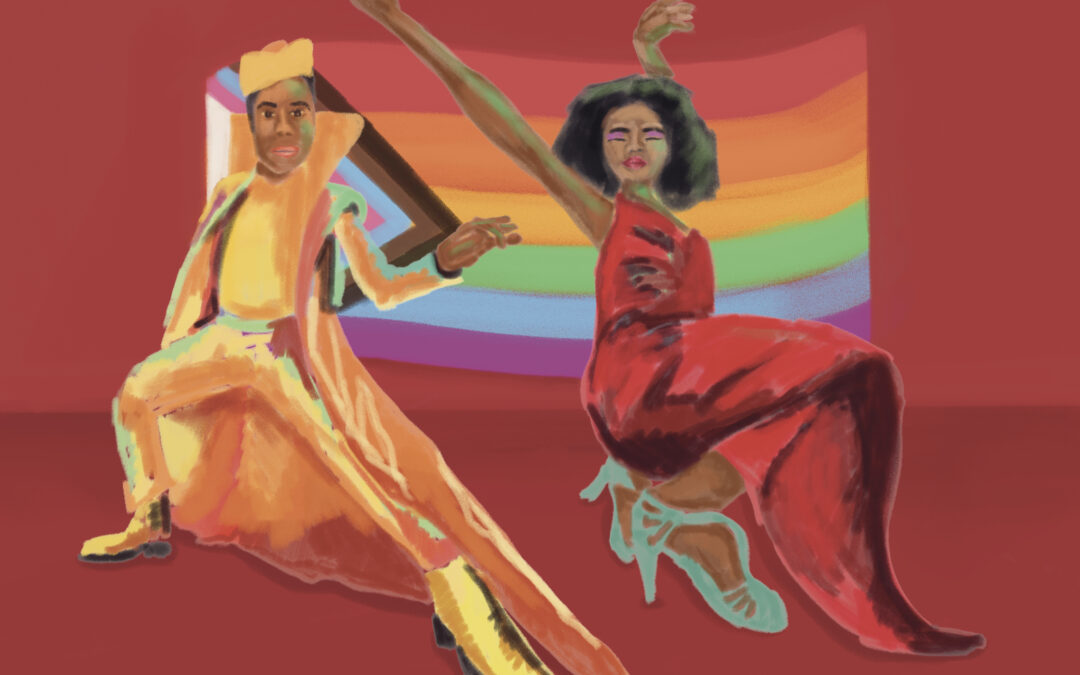 Ballroom culture emerged in the 1920s in Harlem, New York after white queers excluded Black transgender artists and LGBTQ+ folks from the dance hall scene. In the ​​aftermath of the Stonewall Riots in the late 1960s, the ballroom scene became a commentary on race, gender and sexual orientation. Queer Black and Brown people were forced to create this space for themselves in response to police brutality and erasure.

In ballroom culture, contestants perform for trophies, money and glory by dancing, lip-syncing, and modeling. Each drag queen or performer has a persona for each category that they exude for an audience in hopes of bringing fame to their house, or teammates.

For decades, ballroom was an underground cultural movement that was created by African-American and Latino queers who wanted a space to express themselves freely despite the oppression they faced. Different elements of ballroom went mainstream as it influenced pop culture, however, the Black and Brown creators that were impactful in the space did not receive credit for their work. Common phrases like “purr”, “sis”, “she ate”, “on fleek” and “kiki”were created and popularized by Black queer actors in ballroom culture, but are often credited to Gen-Z.

Television series like “Pose” and similar media made by Black Queer artists highlighted ballroom culture and allowed it to grow. Ballroom culture is an LGBTQ+ subculture that originated in New York City. Competitors include teams of transgender people and anyone apart of the LGBTQ+ community, going against eachother. This culture includes balls with fashion, pageantry and dance with categories like Vogue Performances, Realness and Runway in which competitors can walk.

“I think Pose provided the Black queer community with an enriching, intimate vision of our people and our history creating ballroom culture. The show confronts a lot of hard realities faced within our communities but it humanizes the characters, and celebrates the dynamic beauty of existing as Black queer folks,” said Jayla Hart, a poet and recent University of Virginia graduate.

My first experience with ballroom was with the dance crew Vogue Evolution on “America’s Best Dance Crew” in 2009. They included the trans performer Leiomy Maldonado who led the group throughout the series. The Vogue Evolution performances captivated my attention and made me aware of ballroom culture in the media.

Initially, I didn’t understand the connection between ballroom and Black culture but over time, I started connecting Black culture to the pioneers who uplifted the ballroom scene. After America’s Best Dance Crew, I consistently followed Leiomy’s career which led me to “Pose”, where Leiomy choreographed the series’ performances.

The musical drama “Pose” centers around the lives of gay, trans and gender non-conforming people in the New York ballroom culture throughout the mid-1980s before the subculture went mainstream. Rolling Stones’ Striking a Pose: A Brief History of Ball Culture,” explained that the cultural evolution of the ballroom was “facilitated” and “appropriated” by Madonna’s Vogue and Jennie Livingston’s Paris Is Burning, among others.

“Pose” and other similar television series were impactful because they connected real people to the work that inspired mainstream culture for years. It also allowed for Trans and queer artists to receive the credit they deserve. For example, actress Michaela Jaé Rodriguez became the first transgender woman ever to be nominated for an Emmy in the leading actress category due to the success of “Pose.” She was also the first transgender woman to win a Golden Globe for Best Television Actress in a Drama series.

Renaissance was created with the support of Black queer people because the music centered on their culture; along with symbolic references in the music to balls, exuding confidence and vogueing. Ballroom references were ever present in the album as it explored genres like dance, house, disco, pop and R&B.

Both “Renaissance” and “Pose” represent the intersection between ballroom and pop culture – they’re massive projects that innovate art and performance. They both included a multitude of Black and Brown queer people who developed impactful stories that pay homage to the history of the ballroom scene. Take the time to learn about , the creatives it inspired and its history with Black and Latinx people to better understand how it influences mainstream culture.

By learning about ballroom, whether it’s through Beyoncé ’s “Renaissance” or a series like “Pose”, people can expose themselves to the hidden history and culture of Black and Brown communities.