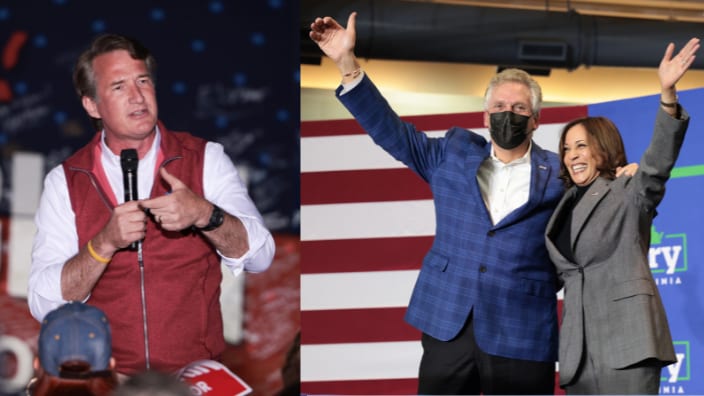 In 2020, Black Virginians voted 89% for Biden and voted 87% for McAuliffe during Tuesday’s contest.

Among the several key races across the nation on Election Day, many observers had their eyes fixed on the Virginia gubernatorial contest. Former Democratic Party governor Terry McAuliffe and Republican Party businessman Glenn Youngkin stood tall on their campaign promises, and now the Old Dominion is moving ahead with an unproven politician.

Youngkin was declared the victor in the race to be the next governor of Virginia, upsetting McAuliffe, who was hoping to be re-elected to the post he last held in 2018.

In the race for Virginia lieutenant governor, Republican Winsome Sears defeated Democrat Hala Ayala — making history as the first Black woman to do so. Both Sears, who is Black, and Ayala, who is Afro-Latina, were to make history as the first woman of color to serve as the state’s second in command.

The liberal-leaning strongholds of Northern Virginia, which include Loudoun County, Fairfax County, Prince William County, Arlington County, and the independent cities of Alexandria and Manassas Park, remained blue. Considering that many of the state’s Black residents who typically vote in favor of the Democratic Party reside in those areas, those districts staying put played well to early projections.

Across the rest of the state, however, the state’s deep red districts across the western end and rural areas voted as expected given that these are largely conservative bases that supported former president Donald Trump in droves. They are also part of a growing contingent of dissatisfied voters critical of the early returns of President Joe Biden’s presidency and the administration’s push for social programs, which would benefit most working-class Americans.

Virginia’s Black population is the state’s largest minority group but make up just 19% of the state’s 8.6 million residents. Virginia has its share of moderates and conservatives, and it should be assumed that McAuliffe potentially lost those voters due to no longer having the foil of Trump in office to propel his campaign, and instead the realities of an economic and public health recovery that has been slower than some hoped.

Youngkin, a former CEO of The Carlyle Group, ran by attacking the so-called “liberal-left” and other talking points that emerged in the era of Trump while also projecting a sense of order and a return to family values, all of which appealed to conservatives.

McAuliffe leaned on his past achievements as governor and worked in tandem with Democratic Party notables and leading operatives, including the like of former President Barack Obama, Vice President Kamala Harris, and Stacey Abrams. Neither candidate strayed far from the overarching political ambitions and concerns of their parties.

The political boogeyman of the moment, critical race theory, also figured heavily in the Virginia race with Youngkin shouting down the teaching of CRT across the state’s schools, despite the fact that it is not taught in K-12 classes. McAuliffe may have potentially lost support over the wedge issue of CRT saying on the campaign trail: “I don’t think parents should be telling schools what they should teach.”

There is also the issue of jobs and the economy, all which Youngkin wisely touted as his focus to bring the state back up and running in the wake of the ravages of the coronavirus pandemic.

Less Black women appeared to show up to the polls for Tuesday’s election than they did in the 2020 general election for President Biden, 86% to 92% respectively. The number of Black male voters remained relatively the same. In 2020, Black Virginians voted 89% for Biden and voted 87% for McAuliffe during Tuesday’s contest.

Black men and women made up just 16% of the total vote with white voters owning the lion’s share of 74% of the vote. As with most races that are not the big-ticket moment of the presidential election, voter turnout was expectedly low with millions among the state’s nearly 6 million eligible voters electing to stay at home.

Have you subscribed to the Grio podcasts, ‘Dear Culture’ or Acting Up? Download our newest episodes now!