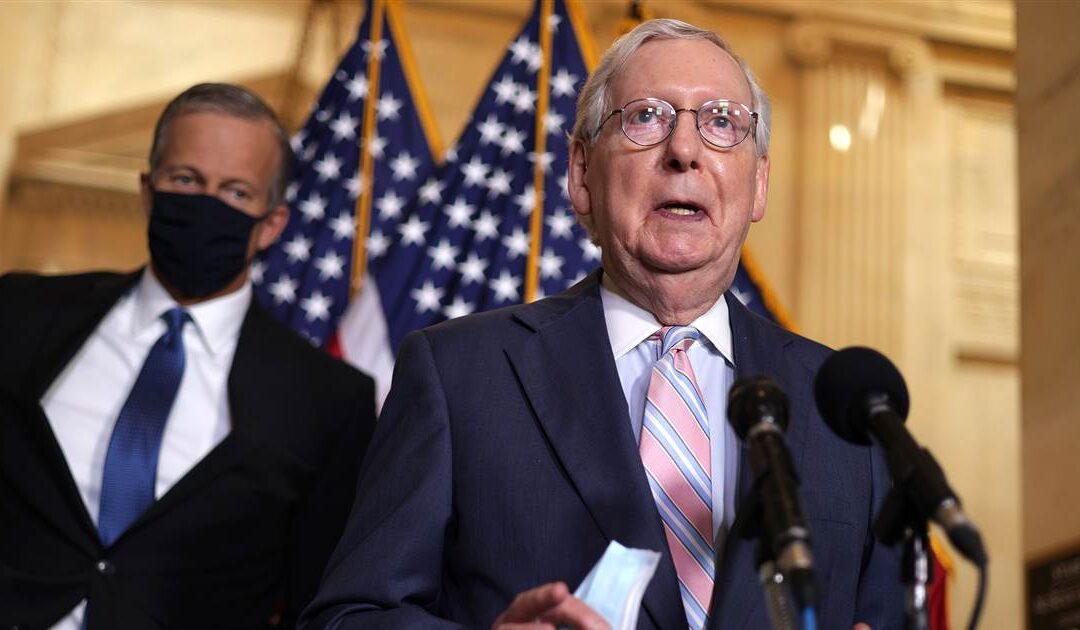 Speaking to reporters in his home state of Kentucky, McConnell was asked about the House GOP leadership feud that reached a boiling point this week after Rep. Liz Cheney of Wyoming, the third-ranking Republican, again rebutted former President Donald Trump’s stolen election lie. McConnell was also asked whether he was concerned about the direction of the party.

“One-hundred percent of our focus is on stopping this new administration,” McConnell said, adding, “We’re confronted with severe challenges from a new administration, and a narrow majority of Democrats in the House and a 50-50 Senate to turn America into a socialist country, and that’s 100 percent of my focus.”

A motion to remove Cheney from her leadership position could be filed as early as May 12 when the House is back in session. Moves to oust Cheney burst into public view Monday after she responded to a Trump statement by saying anyone claiming the 2020 presidential election was stolen is “poisoning our democratic system.”

Biden: Republicans are in the middle of a ‘mini-revolution’

McConnell previously condemned Trump’s conduct around the Jan. 6 Capitol riot — though he did not vote to convict Trump in his impeachment trial — and has said Biden rightfully won last fall’s presidential election.

He was asked Wednesday if it is concerning that a significant number of GOP voters don’t believe Biden won.

“One-hundred percent of my focus is on standing up to this administration,” he responded, reiterating his earlier comments. “What we have in the United States Senate is totally unity from Susan Collins to Ted Cruz in opposition to what the new Biden administration is trying to do to this country.”

McConnell’s comments drew comparisons to remarks he made about then-President Barack Obama to the National Journal just prior to the 2010 midterms.

“The single most important thing we want to achieve is for President Obama to be a one-term president,” McConnell said then, noting elsewhere in the interview that Republicans were open to some compromise and adding, “I don’t want the president to fail; I want him to change.”

Speaking to reporters in Washington, Biden said McConnell “said that about the last administration — about Barack, that he was going to stop everything.”

But Biden added he “was able to get a lot done with” McConnell regardless.

Vice President Kamala Harris told reporters the administration has “been very clear” that it “will continue to attempt to work on the most pressing issues facing the American people in a bipartisan manner, which is why we’ve been holding meetings in the Oval Office with bipartisan members of” Congress.”

She added the Biden team believes bipartisan action is “possible, and we’re not going to give up on that until it becomes evident that it’s not possible.”

Republicans have been highly critical of the president’s roughly $4 trillion infrastructure and family plans, which, when combined with Biden’s nearly $2 trillion Covid stimulus package enacted in March, would total about $6 trillion in spending.

On infrastructure, Republicans have promoted a $568 billion counterproposal. Sen. Shelley Moore Capito of West Virginia, who is leading the GOP infrastructure effort, spoke with Biden by phone last week and called the conversation “constructive and substantive,” while the White House described it as “warm” and “friendly.” Both Biden and Capito reiterated “their willingness to negotiate,” the White House said.