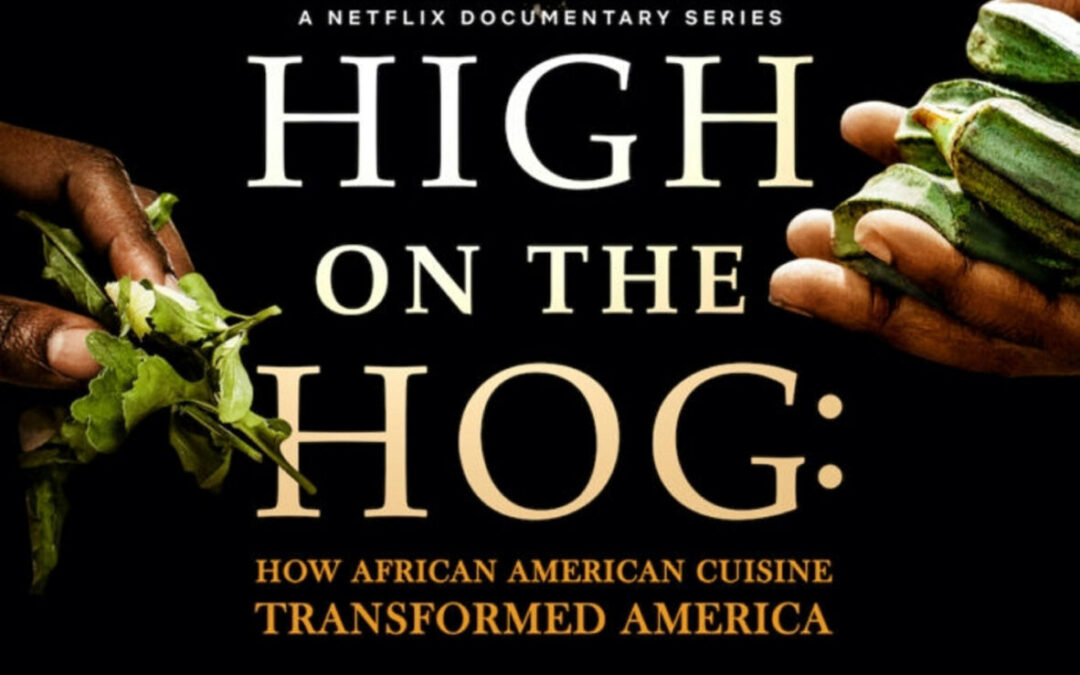 The first time I ate an oyster, I was newly out of college, at a mixer on Wall Street with mostly white professionals. I didn’t know how to eat one-having never been taught or seen someone do it-but I wanted to show that I was cultured.

I was taken back to that moment while watching Netflix’s newest documentary, High on the Hog, available starting on May 26.

The show reveals that Black folks were purveyors of oysters, helping elevate the mollusc’s status centuries ago-right there on Wall Street-to the high-class fare it is today. A lack of knowledge about this history had made me feel out of my element back in that moment.

In 1800s antebellum America, New Yorkers were obsessed with oysters, eating on average 600 of them a year. Hot dog-like stands popped up to meet demand. In Sandy Ground in Staten Island, Free Black Americans would collect oysters that were later sold in lower Manhattan.

Thomas Downing, a free Black man, recognized the insatiable appetite for the shellfish. He opened an upscale restaurant that was frequented by white bankers, attorneys, and politicians. At the time, most Black Americans were in bondage, cooking, harvesting, and making this nation the wealthiest on Earth. Yet here was Downing, making his own contribution to America’s bountiful pantry, all the while harboring runaway slaves below his ritzy restaurant.

In this four-part series, Downing’s story is just one of an array of anecdotes about Black farmers, chefs, restaurateurs, and caterers. It’s used to argue that Black Americans were integral to making high-quality, coveted cuisine. It also lays out how this oppressed group of people — given scraps without a second thought — often used food as an avenue to express freedom, show resistance, and share love, even in the most challenging circumstances.

High on the Hog, based on a book of the same name by Jessica B. Harris, arrives at an opportune time. Our relationship with food has deepened over the past year, as Americans were reintroduced to home kitchens and the concept of cooking at home. Those circumstances give this umbrella of a food documentary the chance to reach an even broader audience.

The country has also been reckoning with racial injustice after the killings of Breonna Taylor, Ahmaud Arbery, and George Floyd came as painful reminders that Black Americans constantly try to be deemed worthy in this country. Amid this internal conflict, High on the Hog provides some answers for anyone seeking to better understand what they eat and the indelible connection it has to every facet of the American diet, from staple ingredients to fine dining, along with the Black experience.

The project takes the time to unravel our assumptions and break the perception that African American cooking is confined to just soul food. Harris, a former travel editor at Essence, helps host Stephen Satterfield kick off his journey as he travels to more than a dozen cities to trace the cuisine’s evolution of Black cuisine, from Benin on the west coast of Africa to the shores of Charleston, S.C., up to Wall Street and across the plains of Texas. Viewers learn the difference between a yam and a sweet potato, how macaroni and cheese was popularized by Thomas Jefferson’s enslaved cook James Hemings (older brother of Sally Hemings), the significance of the color red in Juneteenth desserts, and how Black cowboys fed Americans’ obsession with red meat by herding more than 5 million cattle from Texas.

This history, like many elements of Black culture, has been under-discussed or consciously erased. Take those yams, which are native to Africa but made their way here in the bowels of slave ships going through the Middle Passage. Enslavers packed yams, along with millions of people stolen from their homes, offering one last taste of an ancestral land they would never experience again. The topography of areas such as South Carolina was transformed by the labor of enslaved Africans who planted rice fields that can now be seen from space.

Many of these contributions are currently at risk. Longtime farm holdings are being taken away from Black families through eminent domain; the land of the Gullah people (Black Americans who live off the coast of South Carolina and other low-country states, largely isolated from the broader U.S. population) is being gentrified with golf courses and resorts; a barbecue joint that served brisket for generations is forced to close.

What’s more, this documentary was filmed before the COVID-19 pandemic, which devastated Black businesses at disproportionate rates.

The weight of this reality looms heavily-almost like a meal that just hasn’t settled right.

But the project doesn’t stay there. It celebrates the joy and resilience of Black cuisine and in turn, Black people. The episodes are most vibrant with scenes of Satterfield walking through crowded markets in Cotonou, Benin, sharing family meals in Philadelphia, or chowing down on turkey legs while watching the melodic movements of Black cowboys at a rodeo. Camera shots take care to zoom in on a blue flame being lit under a pot, fish sizzling in a pan, and barbeque sauce being drizzled over brisket.

The documentary weaves together all these disparate ingredients in a way that is visually beautiful and strongly compelling. It also makes a powerful argument for considering the significance of an oyster, the next time you grab one off a tray.

As an Amazon Associate I earn from qualifying purchases.

← US police release footage of Black man’s violent 2019 arrest | | ← George Floyd’s murder fueled the Black Lives Matter movement. A year later, activists and families are clashing over what comes next