“Our Rights Are On The Chopping Block”— Black Women Leaders, Allies Rally Congress For Voting Rights And Economic Justice 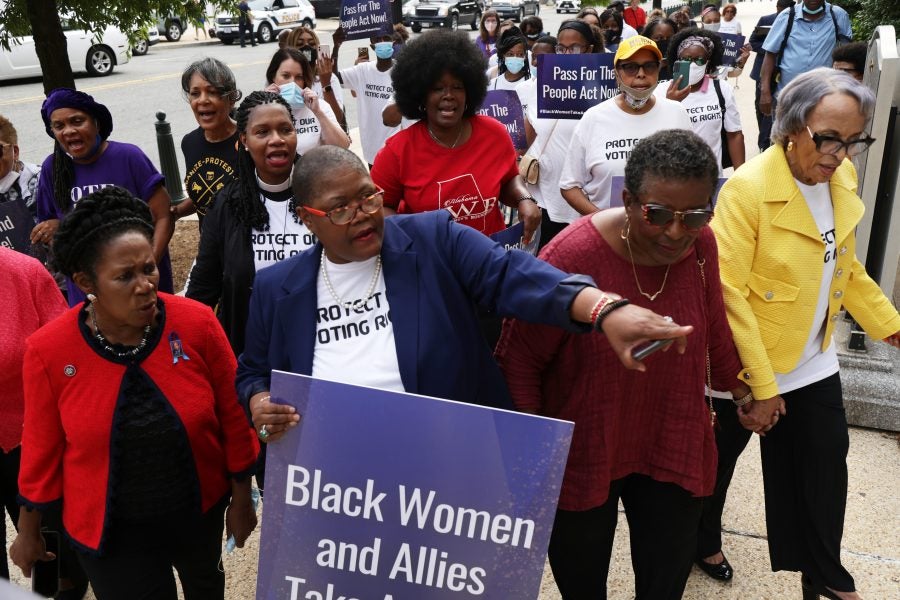 The leaders of national organizations that serve Black women and allies held a speak out on voting rights and economic justice in front of the Supreme Court of the United States on Thursday.

They rallied to urge Congress to pass the John R. Lewis Voting Rights Advancement Act, the Build Back Better Act, and the Infrastructure Investment and Jobs Act, the latter of which passed Friday.

“We are here because the struggle for voting rights and economic justice are linked. Our rights, our dignity, it’s all on the chopping block if we don’t come out and say enough is enough,” said Melanie Campbell, President & CEO of the National Coalition on Black Civic Participation (NCBCP) and National Convener of its Black Women’s Roundtable (BWR).

According to Campbell, this speak out marked the seventh Black women leaders and allies day of action for voting rights on Capitol Hill. She said that over 100 organizations had partnered with NCBCP since July to support efforts for voting reform and economic justice.

The rally took place just one day after Senate Republicans blocked the John R. Lewis Voting Rights Advancement Act from advancing on Wednesday when the Senate took a procedural vote on whether to open debate on the legislation.

WATCH LIVE: Black women leaders, allies voting rights & economic justice speak out at SCOTUS buildingBlack women leaders and allies urge Congress to pass the John Lewis Voting Rights Act, the Freedom to Vote Act, the Build Back Better Act, and the Infrastructure Investment and Jobs Act during a rally on the steps of the Supreme Court.Call your U.S. Senators at 202-224-3121 to demand Congress end the filibuster to pass federal voting rights reform and pass the Build Back Better and Infrastructure Bills NOW!

Posted by The National Coalition on Black Civic Participation on Thursday, November 4, 2021

The bill did not receive the 60 votes needed to overcome a legislative hurdle known as a filibuster, preventing the start of debate on the legislation. The final vote was 50 to 49 with GOP Sen. Lisa Murkowski of Alaska voting in favor with Democrats.

“I say, we say, and the American people who believe in Democracy say, shame on those 49 Republican Senators who choose partisan power over we the people. This is why the filibuster must go,” said Campbell.

The legislation is named in honor of late civil rights icon Rep. John Lewis. It’s aimed at fighting voter suppression and restoring key parts of the landmark Voting Rights Act of 1965 which were struck down by the Supreme Court in 2013.

“We know so much is at stake. I am moved because I can’t imagine that a bill with the name of John Lewis on it, that’s about restoring the full protections of the Voting Rights Act, can’t get a proper hearing on the floor of the Senate,” said Rep. Terri Sewell (D-AL).

“They love to talk about how much they love John Lewis. Well, this is the best way to honor his life and legacy… Pass H.R.4,” said Rep. Sewell.

In addition to voting rights reform, these Black women leaders and allies also urged Congress to pass the Build Back Better Act and infrastructure bill.

“Together both bills have key provisions that will assist in addressing the racial wealth gap. The bi-partisan infrastructure bill provides millions of good union jobs, broadband, environmental and climate provisions necessary to build strong Black communities and all communities,” said Robin Williams, National Board Member, NAACP referring to the infrastructure bill and the Build Back Better Act.

The Infrastructure Investment and Jobs Act, which passed Friday with a vote of 228-206, is a roughly $1.2 trillion measure to improve the nation’s roads, bridges, pipes, ports and internet connections. The legislation includes $550 billion in new federal investments over five years to modernize roads, bridges as well as transit systems while expanding high-speed internet systems and the nation’s network of electric vehicle charging stations.

The Build Back Better Act is a $1.75 trillion plan (pared back from $3.5 trillion), that focuses on expanding social safety net policies and programs ranging from education to healthcare to housing to climate. It includes an expansion of Medicare, free, universal preschool, paid parental leave, measures to fight global warming, and new benefits to low-income families.

“Together paid leave and the child tax credit will give Black families and underrepresented communities the opportunities they need to move forward to prosperity and to begin generational wealth…today we need each of you to contact your elected officials and tell them to pass both of these bills,” said Williams.

On Saturday, the president called it a “once-in-a-generation investment” that’s going to create millions of jobs, modernize our infrastructure, our roads, our bridges, our broadband, a whole range of things, to turn the climate crisis into an opportunity.”

The bipartisan infrastructure bill now heads to the president’s desk to be signed into law. Plans to also pass the Build Back Better Act on Friday failed. However, the legislation passed the key procedural vote needed to advance the bill for debate.

Members of the National Coalition on Black Civic Participation, The Black Women’s Roundtable, the National Council of Negro Women and their partner organizations say they will keep showing up to Capitol Hill and mobilize on the ground state-to-state to protect the civil rights of all Americans.

The post “Our Rights Are On The Chopping Block”— Black Women Leaders, Allies Rally Congress For Voting Rights And Economic Justice appeared first on Essence.

← Pay Up: Black Man Paid $1.3 Million After Being Arrested By Boston Police While He Was Having A Stroke ← Historian: Black distrust of the police is about more than acts of violence