As far as Percy Green’s victories go, the diminishment of the Veiled Prophet is symbolic but significant. Thanks to the Freedom of Information Act, we know that Green had a miles-long COINTELPRO record. In the course of his activist career, he mastered a rapidly evolving media environment in the 1960s, won a Supreme Court case against the military-industrial complex giant McDonnell Douglas (now part of Boeing), and made enemies of almost every powerful institution in St. Louis. From churches to power companies, to banks and Monsanto, Wonder Bread to the Veiled Prophet: The elites knew Percy, and Percy knew the elites.

Green was arrested more than a hundred times, four or five times a year in a 20-year period. His status as a lesser-known civil rights figure goes hand in hand with his being a Black activist in the Midwest, but it’s these underexamined local struggles that can yield insight on the most crucial lessons today. Especially when it comes to media and image, in matters of which Green was—and is—a genius. As the latest Veiled Prophet ball approaches, let’s take a look at how he did it.

Sit-in protests were CORE’s specialty, but Green eventually found them unsatisfying. This is the era he later called the “tea and cookies” period of Black struggle. After a CORE protest at Kroger grocery, Green recounted that activists confronted management, and management came back with mere tea and cookies; “Street-wise, can’t you see that’s bullshit … a stalling mechanism?” By the ’60s, Green felt that CORE’s strategy wasn’t pushing the envelope hard enough. “The members had battle fatigue or something, I guess,” Green told a reporter in 1970. “We needed a group that would be a spark for change in St. Louis.”

After decades of integration strikes and sit-ins, two days after Martin Luther King’s 1963 “I Have a Dream” speech, members of CORE got back from D.C., charged off the buses, and began a protest that would split the group. The Jefferson Bank Demonstration is a landmark in St. Louis’ civil rights history—the bank served a majority-Black clientele but employed zero Black tellers and had no integration among employees higher on the pay scale, either. CORE advocated inclusion and meritocracy. “Doctors for Equality” read some of the signs during the Jefferson Bank protest. “Responsible People Want Justice!” But the younger generation of activists, including Green, wanted more—they wanted economic justice not just integration.

The Jefferson Bank protest went on for months and lead to many arrests before concessions were made. The aftermath birthed ACTION, the Action Committee to Improve Opportunities for Negroes. This new group was composed of many CORE members, Black and white professionals, women and men, students, teachers, or professors from the local colleges. This new group wanted to be more radical but remain strategically integrated like CORE. As historian Thomas Spencer notes, members like Jacqueline Bell, a Black woman, believed that integration within civil rights activism reflected the real world in which “all kinds of people live together and needed to work together in order to achieve justice.” But for ACTION, Black leadership was the only absolute organizational rule: “Black folks had the right to make mistakes for Black people,” Green explained, “rather than to have white people make mistakes for them.”

On July 14, 1964, ACTION staged its first protest near St. Louis’ most famous parabola, the Gateway Arch. At the time, the Arch was under construction via federal contract and hadn’t hired any Black workers. A decoy picket line outside the Old Courthouse drew the press downtown with the primary demand: “1000 skilled jobs now,” read the signboards—not just low-level jobs, skilled jobs. Once the press was gathered at the picket, Percy Green and a white activist named Richard Daly entered the construction site and scaled the side of the Arch via partially enclosed steel ladder—“HIRE BLACK WORKERS” was painted on Percy’s back.

Green and Daly came down, and were arrested. The press got lots of photos from the event, and though most of the images printed did not include the message on Percy’s shirt, the point was made. Green and Daly had risked life and limb to climb the city’s big symbolic structure, and ACTION was truly born.

Green became known for his ACTION style—green fatigues, a Black Panther–ish beret, and a tiger’s tooth necklace helped him play the role of champion for the St. Louis Black community. ACTION mixed nonviolent sit-ins with guerrilla street theater. Green climbing the half-finished, metaphorical gateway was the kind of viral stunt designed to trouble the idea that the Black working class of St. Louis was going to stay quiet and sit idly by watching, without objection, as contracts and resources continued going only to white people.

St. Louis had not been doing well since the turn of the century. Many 1950s suburbanites didn’t feel it in the midcentury period, because deindustrialization came for Black neighborhoods first, but as the historian Colin Gordon points out, “The Gateway City is, by any measure, one of the most depopulated, deindustrialized, and deeply segregated examples of American urban decay.” In the late 1960s, ACTION targeted capital interests—the biggest companies in the city—to demand a shot at what economic prosperity was left. At the very least, the public should hear the pain of the city’s marginalized.

ACTION’s protests were dramatic and visceral. In 1969, ACTION demonstrated at churches with financial interests tied to the city’s utility companies, which were frequent targets of the group, due to ACTION’s conviction that the utilities had racist hiring practices. Wielding buckets of black paint and brushes, they blackwashed the ivory-white statues of saints and holy figures. In July of 1970, Green and the ACTION activists entered Southwestern Bell’s headquarters disguised as janitors. They staged a “stick-in” by pouring molasses in the lobby of the company headquarters. “Gooey Protest at Bell Brings Arrest for 2,” read the Globe-Democrat headline. In Green’s words, as cited in Grassroots at the Gateway by Clarence Lang, the choice of fluid had meaning: “Number one, we’re going to stick right with them until they do the things that we want done.” Also, “racism is sticky.” In 1975, at the downtown Union Electric Co. building, “activists posing as laborers sprayed a strong, ammonia-based substance over desks and typewriters, symbolizing their determination to ‘clean up’ the company’s service and employment practices.”

When acting as the chairperson of ACTION, Green went after his own employer. The ACTION activists chained the doors of McDonnell Aircraft, because the aerospace manufacturer started a labor dispute with Green not long after the Arch stunt. In the middle of proceedings, someone from the Defense Department sent Green a letter, “thanking ACTION for information it had provided about job discrimination allegedly practiced by local defense contractors.” Green mailed them a bill for “consulting services.”

This dispute with McDonnell would land Green in court and, after a series of appeals, culminate in a Supreme Court case. In McDonnell Douglas Corporation v. Green, the highest court in the land ruled that plaintiffs in a racial discrimination suit needed only to establish “minimum proof” that they were denied employment or discharged due to racism. This set a standard for private discrimination cases and earned workers a powerful weapon in the war against corporate employers.

Confrontations with capital came at a price. Clarence Lang notes the rumors among activists at this time said Richard Nixon’s “concentration camps” were ready for political dissidents. This paranoia and disinformation were an active project of the U.S. government. In the ’50s, FBI Director J. Edgar Hoover launched the Counterintelligence Program, or COINTELPRO, as part of a larger offensive against American communists, civil rights leaders, the Black Power movement, and antiwar organizations. In 1967, Green made the FBI’s “Rabble Rouser Index.”

Green and ACTION were undeterred. Since 1878, there had been no better venue for addressing every business tycoon, CEO, and hiring manager in the greater St. Louis metropolitan area than the one night of the year when all gathered for the Veiled Prophet’s debutante ball. Annually, the affluent families of the city—the Busches, the Danforths, the Kempers—gathered in the Kiel Auditorium for a debutante parade where the Veiled Prophet crowns his “Queen of Love and Beauty.” 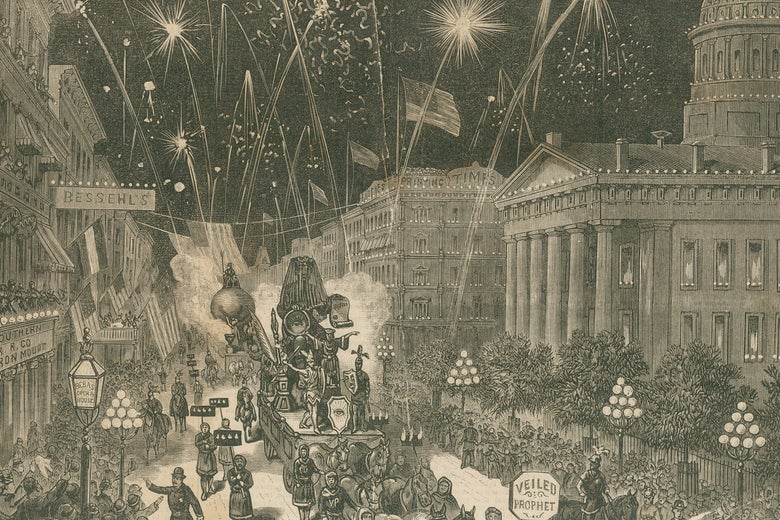 ACTION protested the Veiled Prophet every year from 1965 to 1984. At first, the strategy was to run out in front of the Fourth of July parade, block it up, and get arrested. From there, things escalated. Activists jumped the barriers and ran out in front of the parade, handcuffing themselves to the floats. Then, an activist with “society” written on their shirt would lay down in the road, while a third activist with “justice” written on a white doctor’s coat would revive the fallen “society.” The parade would be disrupted, everyone would get arrested, and the public got the message. Out of fear of the protests, the Veiled Prophet queen and maids ceased to take part in the parade after 1967. In 1968, the parade moved from downtown to the Central West End—an affluent white district of St. Louis.

In 2021, American politics feels arrested. It takes record-breaking protests to popularize the idea that Black people shouldn’t be executed by police, and even those demonstrations (some argue) have not brought about policy changes. On the left, the levers of power are captured by a corporate Democratic Party that’s free to water down progress and ignore systemic, overlapping crises: a militarized police violence, absurd health care costs, accelerating environmental catastrophes.

However immovable American politics feels, Green and the ACTION protesters faced a similar struggle, just as all working-class movements do. Green was a genius of media manipulation in an era of newspapers and television. Today—like it or not—much of our political space is digital. Memes are, arguably, more influential than newspapers, and when it comes to raising class consciousness, it helps if the messaging is funny, just like ACTION’s joyous punching up at the dusty conservatism of the St. Louis elites. After all, the Veiled Prophet is a kind of clown; Green and ACTION showed us that.