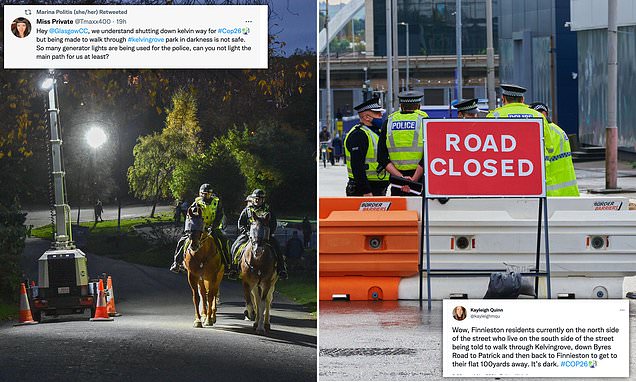 Police Scotland have issued an apology after scores of women were forced to walk home through a ‘pitch black’ park after the COP26 road closures last night.

Residents in Glasgow described how they had been told by officers to use alternative routes, including Kelvingrove Park and the sidestreets, after cordons were put in place on the main roads to allow COP delegates to drive around in safety.

The road closures came as hundreds of world leaders attended the biggest gathering of Government representatives since the birth of the United Nations at Glasgow’s Kelvingrove Museum on Monday night.

Taking to Twitter one woman wrote: ‘Hey @GlasgowCC, we understand shutting down Kelvin Way for COP16 but being made to walk through Kelvingrove Park in darkness is not safe.

Women in Glasgow described how they had been told by officers to use alternative routes, including Kelvingrove Park, last night. Pictured: Police on horseback in Kelvingrove Park

‘So many generator lights are being used for the police, can you not light the main path for us at least?’

Meanwhile another person wrote: ‘I know that COP26 is a big logistical challenge but I’ve heard first hand that women on foot on their own are being diverted and directed to walk through Kelvingrove Park alone in the pitch black because Argyle St/Dumbarton Rd is close? Not safe.’

And another added: ‘Walking through Kelvingrove Park in the dark on my own last night.

‘All the police they’d got in from England having no clue about the area so responding to lone women asking them for directions with ”I don’t know sorry just walk around and find out”.

‘While late changes and some level of disruption is inevitable when policing an event the size and scale of COP26, we understand and apologise for the concern these changes caused and for the inconvenience to those diverted.

‘We do, in particular, recognise and acknowledge the commentary from some women who had to walk through the park on their own last night, we want to keep everyone safe and we know that the onus is on us to recognise when we could provide some more support and visibility to reassure people in our communities.

‘The diversion is no longer in place and there are no plans to reintroduce it. Should further diversions be required at short notice for operational purposes, we will look to establish additional patrols in the area to provide reassurance.

‘We will work with Glasgow City Council to consider whether lighting in Kelvingrove Park can be improved.’

Last night world leaders including Joe Biden, Boris Johnson, Angela Merkel and Justin Trudeau, engaged in a spot of dinner-time diplomacy as they joined hundreds for a lavish reception at Kelvingrove Museum.

During the night the Prime Minister, who hosted the evening at the recently renovated gallery, told leaders the summit was ‘quite an extraordinary historic event’ and it was even more important because ‘we face nothing less than a mortal threat to our planet and to our civilisation’.

He also hailed Prince Charles as ‘the man to defuse the bomb at the world’s moment of danger’ and described him as a ‘prophet without honour’.

Mr Johnson’s comments came after President Biden apologised for his predecessor Donald Trump taking the United States out of the Paris Climate Accord and pledged the U.S would up its financial stake in fighting climate change, arguing the biggest producers of it should be its biggest investors in fixing it.

The views expressed in the contents above are those of our users and do not necessarily reflect the views of MailOnline.

By posting your comment you agree to our house rules.

Your comment will be posted to MailOnline as usual.

Your comment will be posted to MailOnline as usual