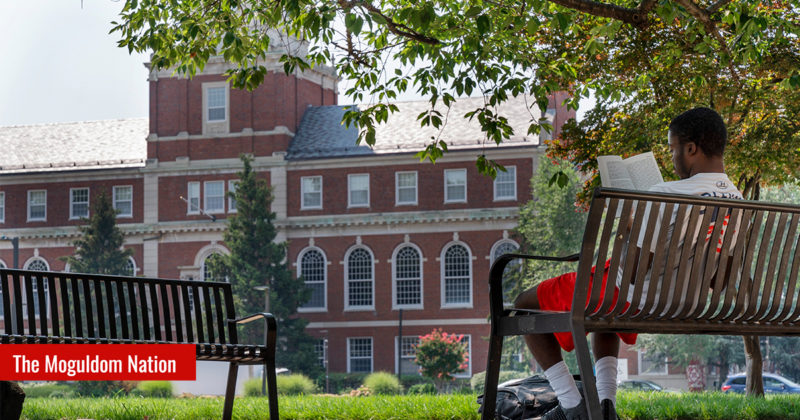 Political thinker Irami Osei-Frimpong said he had to get something off his chest about the condemnation facing Howard University as students continue a month of protests against unsanitary living conditions in their campus dorms.

Students have been occupying the Blackburn University Center on Howard’s campus since Oct. 12, complaining that their dorms are infested with mold, insects and mice, yet the university has failed to meet their demands.

Many have slammed Howard, asking where the money has gone that the school received from a slew of donors – including a $40-million donation from philanthropist Mackenzie Scott, the ex-wife of Amazon founder Jeff Bezos.

People need to stop crucifying Howard for the conditions of its dorms and start understanding the root of the problem, Osei-Frimpong said. A Ph.D. candidate at the University of Georgia’s Department of Philosophy, Osei-Frimpong spoke in a live stream that aired Nov. 7 on YouTube. He said the Howard infrastructure problem is a microcosm of the problem Black America faces as a whole.

According to Osei-Frimpong, Howard having a $700 million dollar endowment and receiving millions in donations over the last year-and-a-half does not put it and other HBCUs on equal footing with prestigious predominately-white institutions.

HBCUs are continuing to suffer regardless of a recent surge in donations, because the sheer amount of money it takes to run and maintain a university like Howard is something Black Americans simply don’t have, Osei-Frimpong said.

Jamarlin returns for a new season of the GHOGH podcast to discuss Bitcoin, bubbles, and Biden. He talks about the risk factors for Bitcoin as an investment asset including origin risk, speculative market structure, regulatory, and environment. Are broader financial markets in a massive speculative bubble?

He also noted the impact of the “Black tax” – a term that describes Black people who have monetary resources being responsible for helping family members financially.

Since the murder of George Floyd, admissions to HBCUs have skyrocketed. Howard itself experienced a 15.9-percent increase in Fall 2020 applications, according to ABC News. However, HBCUs are still in dire need of funding because they have been underfunded for so long, according to experts. Some pointed to a recent increase in federal funding. However, some HBCUs used funding received from the American Rescue Act to cancel student debt and buy supplies for students.

As for what Black people can do in the meantime, Osei-Frimpong suggests telling the truth and not pretending they have money when they don’t.

“There’s no shame” in that, he said. “That could be a point that we need to make and we need to kind of own rather than fake.”

The post Political Thinker Irami Osei-Frimpong: The US Government Made Black Americans Broke, That’s Why Howard Infrastructure Is Poor appeared first on Moguldom.