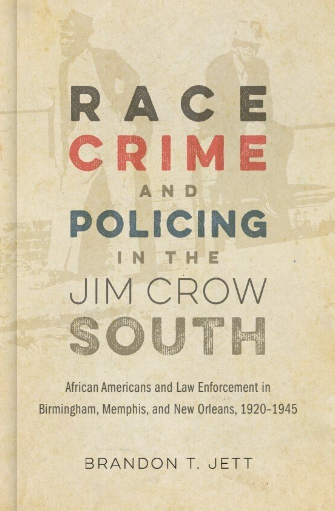 In recent years, American cities have exploded in protests against police violence. Whether the protests were over the murder of George Floyd in 2020s Minneapolis or Bonita Carter in 1970s Birmingham, these Black communities’ reactions were about more than the killings of individuals. These communities were responding to a century of police violence and murder directed at African American citizens.

In his new book, “Race, Crime, and Policing in the Jim Crow South,” Brandon T. Jett, a professor of history at Florida SouthWestern State College, explores this long history of the fraught and dangerous relationship between white police and Black citizens.

“Jim Crow law enforcement officers and institutions,” Jett writes, “by rule and practice, were not created to improve the lives of African Americans.” The white community wanted police to prevent and solve crime, but whites associated crime disproportionately with African Americans and saw police as the frontline enforcers of Jim Crow.

Looking at three major Southern cities — Birmingham, New Orleans and Memphis — Jett finds that while African Americans had good reason to be wary of white police officers, they also needed the help and cooperation of the police to reduce or punish crimes in the Black community. Especially when homicides were committed, people in these communities would give police witness statements; find and turn over evidence, such as discarded murder weapons; track the whereabouts of suspects who fled to other places; and sometimes apprehend suspects and hold them until the police arrived.

Despite “the power imbalance in their interactions with law enforcement,” Black citizens could encourage and influence police investigations. For white police officers, this cooperation helped close cases. “Due to the fact that all-white police forces lacked an intimate understanding of black communities,” Jett writes, “the effectiveness of the police would largely be determined by black residents’ willingness to assist officers.”

After a Black Birmingham man named Will Redford shot another Black man named Jim Hartley to death in 1929, Redford fled the state. Black Birmingham residents tracked Redford to Columbus, Georgia, and reported his whereabouts to the police. Redford was arrested and returned to Birmingham for trial.

This sort of citizen policing was sometimes necessary to remove dangerous people from the Black community. But Black citizens paid a price for their cooperation. In one of the brutal ironies of Jim Crow, Black cooperation helped put more African Americans under the control of the white judicial system.

And while people in Black communities found ways to work within the Jim Crow police system, they also worked to reform the police. In Birmingham, the local NAACP chapter made police shootings of Black people the centerpiece of their activism. “The fight against police brutality and black critiques of police violence against African Americans should be seen as part of the burgeoning Civil Rights Movement,” Jett writes, “but also as part of a broader effort to combat crime and violence in black communities.”

Brandon Jett has written an important and timely book that adds context and complexity to the story of relations between the police and people in southern African American communities. Jett helps us better understand our past while also speaking to the realities of now.

The Birmingham Public Library will host Brandon Jett for a virtual book talk on Oct. 26, 2021 at 6:00 pm. Join the event.

About Reading Birmingham: James L. Baggett, a Birmingham archivist, has assisted with research on many of the 450 books about Birmingham and Alabama since 1970. He reviews new publications and older titles that address the city and state for BirminghamWatch. He has authored or edited five books on Birmingham and Alabama history. Baggett received the Alabama Library Association’s 2019 Eminent Librarian Award.

The post Professor Explores Relationship Between White Police and Black Citizens Through the Years in New Book appeared first on BirminghamWatch.

← 39: Homeless Racism by The Black Guy Who Tips Podcast ← Black music artists should call out racism within our industry. They’ve got the power | wrongmog