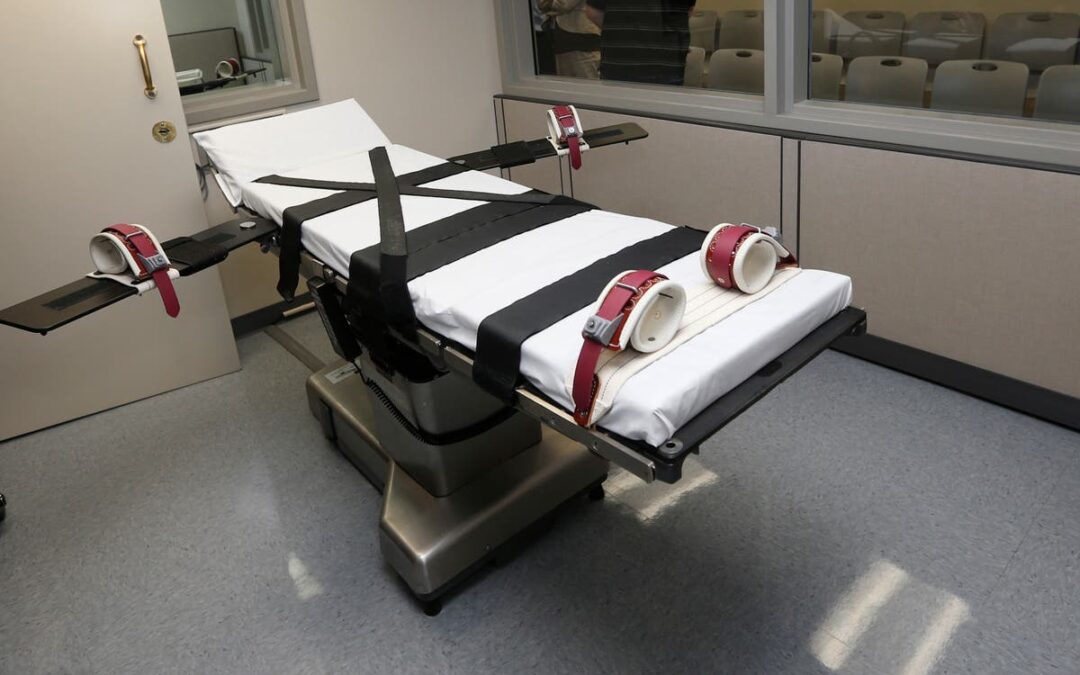 On a cold morning last Wednesday, in the execution chamber at the Eyman prison in Florence, Arizona, a 76-year-old named Murray Hooper, convicted of a 1980 double murder, lay strapped to a gurney, awaiting lethal injection.

Officials failed multiple times to place an IV that would deliver the execution drugs, resorting to placing a catheter in the man’s femoral artery, near his groin.

He turned towards the gallery, looked at the witnesses on the other side of the glass, and reportedly said, “Can you believe this?” before later being pronounced dead at 10.34am.

Even for America, one of few countries globally which still uses the death penalty, last week was exceptionally violent, with four executions planned in the span of 48 hours. The killings were marred with errors, accusations of racism and discrimination, and claims of innocence. One was called off after officials took more than an hour and were unable to place an IV line.

In Texas on Wednesday, Stephen Barbee, 55, was killed, after being convicted in the February 2005 killing of his pregnant ex-girlfriend and her young son.

It took an hour-and-a-half for officials find a vein to deliver the lethal injection drugs.

Barbee’s lawyers said the state wasn’t properly following a March US Supreme Court decision requiring that states respect the requests of the condemned to have faith leaders with them in the execution room.

“The recent spate of botched lethal injection executions have shown that whatever the drug, whatever the protocol, condemned prisoners often spend their final moments in agonizing pain and distress,” Maya Foa, director of advocacy group Reprieve US, said in a statement after the execution.

“Establishing IV access is difficult, even for trained medical professionals,” she added. “Prison officials often struggle to find a vein, subjecting the prisoner to a lengthy ordeal of stabs and cuts. With each gruesome scene in the death chamber, we are witnessing the consequences of persisting with a broken method of execution in real time.”

Why the death penalty isn’t working for America

Fairchild’s attorneys said he grew up in an abusive home, suffered from alcohol and substance abuse at a young age, and developed head trauma as a teen boxer, all of which may have impaired his moral judgment later on. Despite these warning signs, his original attorneys never raised them before the court, even though the Supreme Court has found such factors could rule out a death sentence.

“We shouldn’t have to hold up signs on the road that say ‘Don’t Kill the Mentally Ill’ and ‘Stop Executing Veterans.’ This is the fourth person with mental illness and brain damage that the State has executed in 2022,” Reverend Don Heath, chair of the Oklahoma Coalition to Abolish the Death Penalty, said in a statement. “No end is in sight. We have 23 more executions scheduled in the next 26 months. Oklahoma is ruled by people with hard hearts.”

Perhaps the most controversial of these executions was that of Hooper in Arizona.

Critics say his case is tainted with bias and dubious evidence, as well as corrupted by the involvement of the Chicago Police Department during a period notorious for racism, the abuse and torture of suspects, and numerous false convictions that were later overturned. The story is indicative of the labyrinthine process of capital convictions and near impossibility of slowing the execution machine once it reaches a conclusion.

In November of 1980, Hooper allegedly committed a triple murder in Illinois, then a contract killing double murder in Phoenix the following month. Hooper was well known to Chicago police for past involvement in gang activity, but wasn’t arrested until he was named as a suspect in the Arizona case.

In custody in Illinois, Mr Hooper said he was threatened with suffocation, and had officers jam their fingers down his throat. Years later, his death sentence there was eventually thrown out in appeals court, after a panel found evidence of potential racial bias during his trial was ignored. But by then it was too late. The Illinois conviction helped persuade courts in Arizona to grant a death sentence.

In the Arizona case, prosecutors alleged Hooper was part of a trio of hitmen hired to kill William “Pat” Redmond, on behalf of a mobbed up business man seeking to take control of Redmond’s printing business and its lucrative potential work with Las Vegas casinos.

Only one witness survived the shooting, Redmond’s wife Marilyn. At various points, she claimed the attack was carried out by three Black men, by two Black men and a clean cut white man in a suit, and told detectives she wouldn’t be able to recognise anyof the suspects.

There was no physical evidence that Hooper was involved in the Phoenix shooting, so prosecutors relied heavily on Ms Redmond’s testimony. Officials said she had picked Hooper and a co-defendant William Bracy out of a lineup, though there wasn’t any written record or recorded interviews with police about the positive identification, despite officials possessing a video recording of Ms Redmond attempting to identify a third defendant.

The red flags didn’t end there.

Hooper, who is Black, was convicted by an all-white jury, while being represented by a public defender only a year out of law school.

After Hooper was convicted, the state disclosed it provided drugs, money, and conjugal visits to another key witness. Based on these disclosures, Joyce Lukezic, the wife of Redmond’s business partner the and alleged mastermind of the contract killing, who maintained her innocence, was acquitted after multiple trials.

Robert Cruz, who alleged hired Hooper and the two other hitmen, was tried five times, and was also acquitted. Hooper’s co-defendants in the killing itself all got death sentences, but died before they could be executed.

That left Hooper as the only one to face the death chamber.

He argued that if given the chance, he could get his Arizona conviction thrown out, just like his Illinois one. In 2021, Arizona passed a law allowing forensic testing of materials in old cases, if such methods weren’t around at the time of the original conviction. Hooper and his lawyers argued that officials should test a murder weapon that had been retained by Arizona officials, but the state attorney general’s office successfully argued against such a step.

In the runup to a recent clemency hearing, the state also disclosed that Ms Redmond had been unable to pick Hooper out of a photo lineup at one point, though it later claimed no such photo lineup existed and the disclosure was an error.

To make matters worse, Kat Jutras of Death Penalty Alternatives for Arizona argued, the case got outsized attention this year as Arizona officials ran in the midterms and sought to appear “tough on crime.”

“I think looking back at everything involved in this case raises some serious problems with how justice works over decades, not just in 2022, but it’s looking at all of the problems that are both systemic, that are racially motivated,” she told The Independent.

Hooper, whatever innocence claims he had left, hardly had a chance, she said. There were other death row inmates who had exhausted their appeals before Hooper, but his execution was scheduled first.

As the 76-year-old told The Intercept shortly before his execution last Wednesday, “After I’m dead, the truth is buried with me.”

Hooper’s eventual execution adds to the list of controversial Arizona state killings, after the state paused carrying out death sentences for eight years after a severely botched execution in 2014 and subsequent struggles to find adequate supplies of lethal injection drugs.

Officials can’t seem to carry off an execution where both the right drugs are used, an IV is placed quickly, and the inmate doesn’t suffer, Ms Jutras said, but state officials disclose little about who conducts executions or how they are trained.

“We’ve seen for the last three a consistent problem getting IVs into people,” she said. “We don’t know who these people are. We don’t know what their capabilities are. The only thing I can determine is they don’t have adequate training to do this.”

And Arizona officials aren’t the only ones struggling.

On Thursday, Alabama officials called off the execution of Kenneth Eugene Smith, 57, after it took over an hour to place an IV line and officials were unable to find a suitable vein to deliver the lethal injection drugs.

It’s the second time since September officials in the state have cancelled an execution because of IV trouble, even though placing IV lines is a commonplace medical procedure.

On Monday, Alabama governor Kay Ivey announced a suspension of executions in the state, as officials conduct a “top-to-bottom” review of what’s going wrong.

Despite these continued problems with executions, a slim majority of Americans approve of capital punishment for convicted murderers, according to recent Gallup polling, though support is way down from the high watermark of the early 1990s, when about 80 per cent of citizens favoured the punishment.

Ms Jutras says she’s clear eyed about the future of capital punishment reform. America, she argues, may not yet be ready to abolish the system, but few can look at it without seeing some cause for change. Numerous people on death row suffer from severe mental illness, so she’s hoping mental health reform can limit the pipeline of people heading towards the execution chamber.

“Mental health is not a political issue. There are people on both sides of the aisle who can identify with loved ones suffering from mental health issues,” she said. “We can address why our death row has 110 people on it, starting with mental health, that’s something  where there’s a lot more agreement.”

The Independent and the nonprofit Responsible Business Initiative for Justice (RBIJ) have launched a joint campaign calling for an end to the death penalty in the US. The RBIJ has attracted more than 150 well-known signatories to their Business Leaders Declaration Against the Death Penalty – with The Independent as the latest on the list. We join high-profile executives like Ariana Huffington, Facebook’s Sheryl Sandberg, and Virgin Group founder Sir Richard Branson as part of this initiative and are making a pledge to highlight the injustices of the death penalty in our coverage.

← The Pause On Student Loan Payments Is Extended Again ← If Mississippi Wants To Save Babies, Expand Medicaid | Crooks and Liars