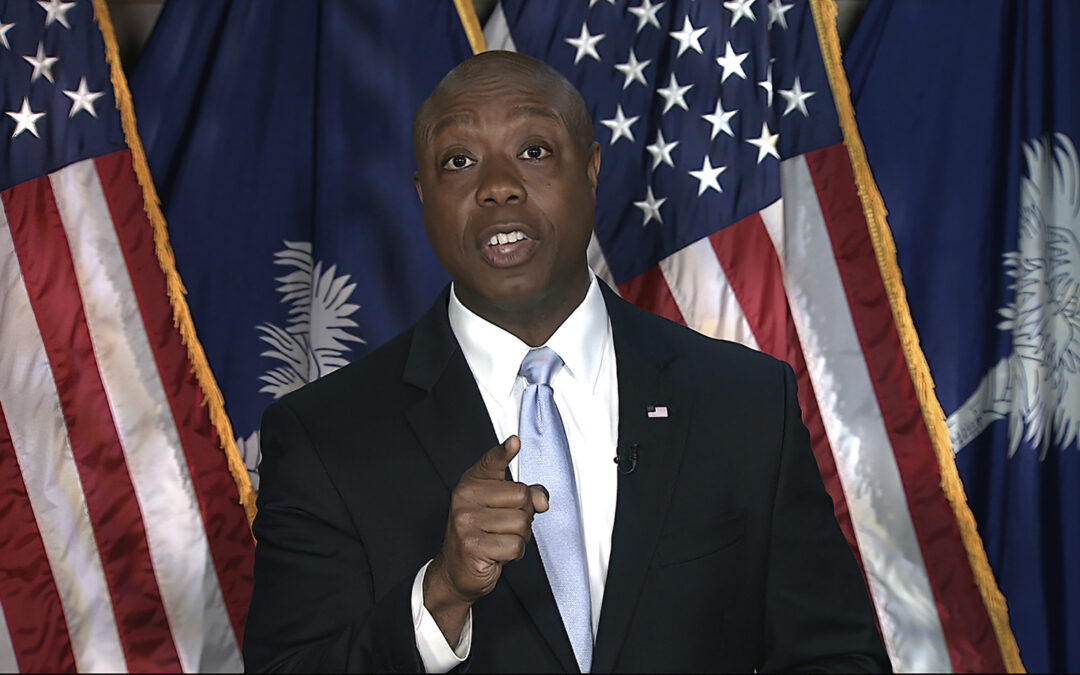 The official Republican response to United States President Joe Biden’s speech to Congress on Wednesday night came from Tim Scott, the only Black Republican US Senator.

“Hear me clearly: America is not a racist country,” Scott said in a televised rebuttal. And after detailing his own personal experience with discrimination, he accused Democrats of using race as “a political weapon”.

“Race is not a political weapon to settle every issue the way one side wants,” he said.

Scott has been representing the conservative state of South Carolina in the US Senate since 2013. The 55-year-old is viewed as a rising star in the Republican Party.

His 15-minute address which aired following Biden’s prime-time speech ignited debates on social media and the phrase “Uncle Tim” became a trending topic on Twitter. After pushback from Twitter users, the site reportedly struck down the topic on Thursday morning.

And – just like that – @Twitter has now blocked the racist slur against Sen. Scott from trending. Some 11 hours later.

“Uncle Tim” was a reference to “Uncle Tom” a historically derogatory phrase used to describe a Black person who is viewed as being excessively subservient to white people.

During his speech, Scott himself brought up the phrase saying, “I get called Uncle Tom and the ‘n-word’ by progressives by liberals.”

Speaking on Fox News on Thursday morning, Scott denounced the trending of the phrase on social media.

“Intolerance so often comes from the left with words like ‘Uncle Tim’ being used against me by the left,” he said, “and last night what was trending on social media was ‘Uncle Tim’.”

Biden was asked by NBC News on Thursday whether he disagreed with Scott’s sentiment that “America is not a racist country.”

“No, I don’t think the American people are racist. But I think after 400 years, African Americans have been left in a position where they’re so far behind the eight ball in terms of education, health, in terms of opportunity,” Biden said.

“I don’t think America’s racist, but I think the overhang from all of the Jim Crow and before that slavery have had a cost and we have to deal with it.”

Earlier Thursday, Vice President Kamala Harris agreed with Scott about America not being a racist country, but said the nation should address its racist history, and its continued existence.

“Well first of all, no I don’t think America is a racist country,” Harris told ABC News. “But we also do have to speak truth about the history of racism in our country, and its existence today,” adding that one of the biggest national security threats facing the nation is domestic terrorism perpetrated by white supremacists.

Harris is the first woman and person of colour to become vice president of the US, and has previously called on the importance of addressing the US’s documented history of racial discrimination against Black and brown people.

Biden’s speech on Wednesday night held on the eve of his first 100 days in office, painted a hopeful message of unity and progress. It also called on the nation to do more “to root out systemic racism in our criminal justice system”.

“We’ve all seen the knee of injustice on the neck of Black Americans,” Biden said during his speech. “Now is our opportunity to make some real progress.”

He urged Congress to enact a police reform bill by the one-year anniversary of the death of George Floyd, a Black man who died after Derek Chauvin, a white police officer knelt on his neck for more than nine minutes last year.

Chauvin was convicted of murder by a jury earlier in April.