Sarah Longwell: Biden tax and spending plans might make his GOP voters balk. But they shouldn’t be shocked. 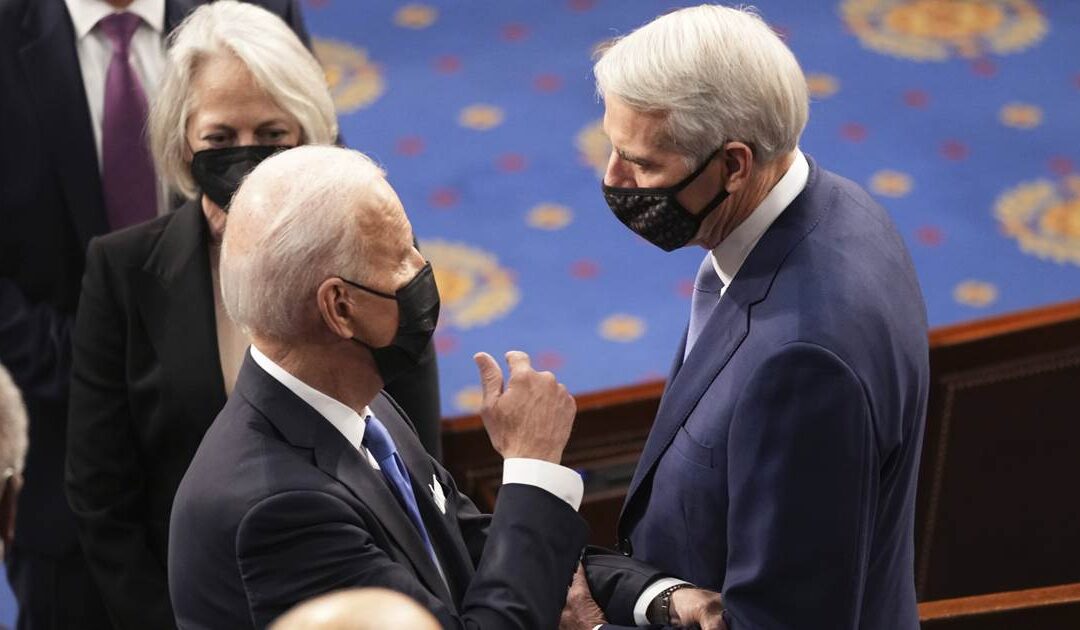 Signaling he intends his next 100 days in office to be as ambitious as his first, President Joe Biden has outlined a raft of new spending proposals totaling trillions of dollars to be paid for through wide-ranging tax hikes. Before even getting to the political and policy implications of the plans, the total price tag is enough to make Biden Republicans — the educated, suburban, right-leaning, anti-Trump voters who helped him secure the White House — balk.

Biden was one of the most moderate candidates in the Democratic primary field, but it would be a misreading of his past and his political present to expect him to govern as a moderate.

The proposals call for massive federal investments in areas from infrastructure to paid family leave to free community college, earning him comparisons to big-spending liberal presidents such as Franklin D. Roosevelt and Lyndon B. Johnson. And that’s exactly who Biden is: an old-fashioned liberal who sees major investment in low- and middle-income Americans as the primary responsibility of the government.

In other words, President Biden is basically the same as candidate Biden.

Biden was elected, with crucial support from anti-Trump Republican voters like the ones we organized through Republican Voters Against Trump, not to be a small-government conservative or a deficit hawk or even particularly moderate. Voters on the right and left chose him because the alternative was a dangerous lunatic. And so far, Biden’s upholding his end of the bargain.

Though, by temperament, Biden was one of the most moderate candidates in the Democratic primary field, it would be a misreading of his past and his political present to expect him to govern as a moderate Democrat in the vein of Blue Dog Sen. Joe Manchin of West Virginia, whose opposition to everything from packing the Supreme Court to statehood for Washington, D.C., is impeding a progressive agenda thanks to a narrow Democratic Senate majority that can’t afford any defections.

Following Biden’s address to Congress on Wednesday rolling out his spending plans, there’s been a lot of hoopla among reawakening GOP fiscal hawks that he is pursuing a partisan, radical agenda. House Minority Leader Kevin McCarthy was quick to accuse Democrats of trying to “demonize work so Americans will become dependent on government” and asserted Biden “wants control of your life.” (McCarthy’s outrage should be taken with a grain of salt. He was silent for four years of President Donald Trump’s massive contribution to the debt, a common hypocrisy that dilutes most Republicans’ concerns on the spending outlay.)

But far from sounding like a central-planning socialist, Biden framed his proposed tax increases in soft terms. “Sometimes, I have arguments with my friends in the Democratic Party,” he noted. “I think you should be able to become a millionaire and a billionaire. But pay your fair share.” No doubt Sen. Bernie Sanders, I-Vt., and Rep. Alexandria Ocasio-Cortez, D-N.Y., weren’t exactly thrilled.

In fact, Biden has rejected the most extreme progressive positions such as scrapping private health insurance, providing complete student loan forgiveness and immediately eliminating the filibuster, which would give the GOP less sway in the Senate. These were all positions he made clear on the campaign trail, giving him a moderate sheen in relation to his opponents. But he also consistently advocated for other measures — such as a $15-an-hour minimum wage, historically large tax hikes and universal pre-K — that mean his current plans should come as no surprise.

Republicans claim to be shocked by his politics despite the fact that he’s been a fixture in Washington for almost half a century. Some are accusing him of betraying his oft-repeated commitment to bipartisanship. As Sen. Tim Scott, R-S.C., put it in his rebuttal speech after Biden’s address Wednesday, the new administration has “pushed us apart” and is laying out “a partisan wish list.”

Leaving aside that Scott seems to have forgotten that Biden’s predecessor turned “pushing us apart” into a dark art form, the president’s speech included numerous appeals to Republicans. It would have been hard for Biden to have signaled more clearly that his proposals were merely opening gambits in what will hopefully be well-joined negotiations.

Over and over, he made clear his willingness to hear the GOP out. Reacting to Senate Republicans’ own plan on infrastructure, announced the week before his speech, Biden said, “I applaud a group of Republican senators who just put forward their own proposal.” He shared credit for the American Rescue Plan, which provided Covid-19 relief, with “Democrats, independents and Republicans,” despite not a single GOP member of Congress voting in favor. He even departed from his prepared remarks to thank Senate Minority Leader Mitch McConnell for renaming a cancer research bill after his late son, former Delaware Attorney General Beau Biden.

By so clearly signaling his willingness to negotiate, he undercut the very positions he was staking out, expending political capital for the sake of bipartisanship. While Biden can certainly be faulted for a lack of compromise in his first 100 days, the contents of his speech were drastically more conciliatory.

Indeed, Biden mentioned Republicans 11 times in his address — and never with scorn, derision or anything but calls for unity and cooperation. This was perhaps the most refreshing part of his address: normality.

Biden’s speech featured no riffing on how great and powerful he was. He didn’t rant about how unfairly his enemies were treating him. He didn’t turn the address into a reality show where guests were awarded medals. Instead, he reminded us of our common bond as Americans: “We have stared into an abyss of insurrection and autocracy — of pandemic and pain — and ‘We the People’ did not flinch.” The ideas that make America an exceptional nation were woven throughout his speech.

So what if Biden has different policy preferences than some of his electoral coalition, some commentators and even some members of his party? Most voters, according to my research in focus groups around the country, are fully aware that their preferred candidates won’t share their exact priorities or preferences.

In fact, some good old-fashioned policy disagreement may be exactly what we need. For too long, the country has been consumed by battles over the rule of law, the legitimacy of elections, our national tolerance for corruption, seeping authoritarianism and violent nationalism. If Biden was elected to bring things back to normal, then he’s already made significant steps toward accomplishing that goal. What, in the course of American history, is more normal than debating government spending and taxation?

Biden mentioned Republicans 11 times in his address — and never with scorn, derision or anything but calls for unity and cooperation.

The more conservative members of his electoral coalition, from suburban split-ticket voters to Manchin, will continue to have policy disagreements with his administration. Just as the president had the humility to invite counterproposals, his critics should muster enough humility to recognize his good faith.

Biden is wrong about some things. Many of his proposals demonstrate undue reliance on the power of the federal government to solve complex problems. Like several of his predecessors, his disregard for the size of the national debt and deficit is likely to cause long-term hardships for the country. Republicans — at least, those few who have any remaining credibility on these issues — should do the hard work of engaging in these debates and finding compromises.