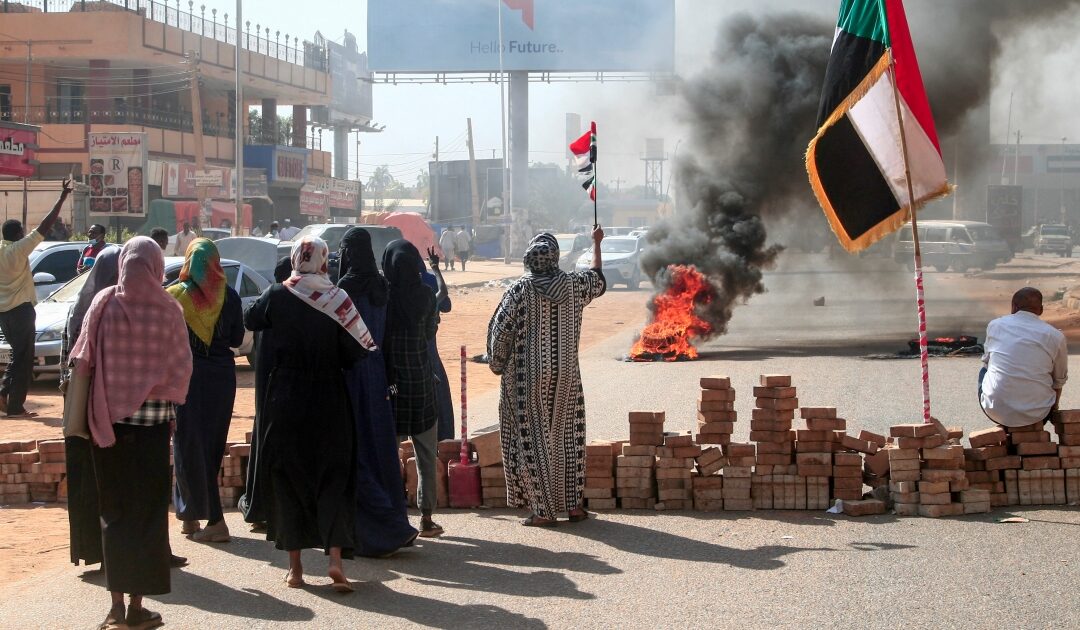 Sudan’s military has placed Prime Minister Abdalla Hamdok under house arrest after moving him to an unknown location for refusing to support a coup, according to the information ministry.

The chairman of Sudan’s ruling body General Abdel Fattah al-Burhan later announced the dissolution of the transitional government and the sovereign council and declared a nationwide state of emergency.

Sudan has been on edge since a failed coup plot last month unleashed bitter recriminations between military and civilian groups meant to be sharing power following the toppling of the country’s longtime leader Omar al-Bashir.

Here are the latest updates:

‘A lot of trouble’ expected in Sudan: Correspondent

Al Jazeera’s Mohammed Vall, who has reported extensively on Sudan, said it was unlikely for the young people who are in the streets of Khartoum to stop their resistance following the announcement of the state of emergency that entails curfews.

“We can expect troubles ahead. They are not going to go back home easily,” he said.

“The civilians in the streets of Khartoum at the moment are armed to their teeth. We know that the armed factions that came from the fringes during the last three years came with their weapons. Nobody checked and because they are in power.”

“To return to dialogue again will take a long time. And there will be a lot of trouble before it begins again.”

World leaders and human rights groups have condemned the detention of several high-ranking Sudanese officials in what appears to be a coup attempt, as a senior military official dissolved the government.

Abdel Fattah al-Burhan, the military officer who heads a power-sharing ruling council, announced a state of emergency across the country and the dissolution of the transitional sovereign council and the government.

He said the 2019 agreement on the transitional government with balanced power between the civilian and military leadership had turned into a struggle that was threatening peace and security.

The military needed to protect the country’s safety and security as stated in the constitutional declaration, he said, announcing the dissolution of the power-sharing ruling council and the government.

He also announced the removal of state governors, saying the elections will be held in July 2023.

Office of Sudan PM urges protesters to take to streets

The office of Sudan’s Prime Minister Abdalla Hamdok called on protesters to take to the streets after security forces detained senior civilian leaders in the transitional government.

“We call on the Sudanese people to protest using all peaceful means possible … to take back their revolution from the thieves,” Hamdok’s office said in a statement.

Sudanese civilian sovereign council member Mohammed Hassan Eltaishi said on his official Facebook page that Monday’s apparent military coup was “political foolishness” and that he would resist it “until the last drop of blood”.

At least 12 injured in anti-military protests in Khartoum

Sudanese Doctors Committee has said on Facebook that at least 12 people were injured in Khartoum during the demonstrations against the attempted military coup, without providing further details.

Sudan’s information ministry said that the protesters were facing gunfire near the military’s headquarters in Khartoum.

It had said earlier on its official Facebook page that tens of thousands of protesters took to the streets heeding calls by the country’s Prime Minister Abdalla Hamdok to reject the coup.

Germany has condemned a coup attempt in Sudan and called for an “immediate end” to the action.

“The news of a new coup attempt in Sudan is troubling,” German Foreign Minister Heiko Maas said in a statement.

“I call on everyone in Sudan responsible for security and order to continue Sudan’s transition to democracy and to respect the will of the people. The attempted overthrow must come to an immediate end.”

“They think that the arrangement of the past two years was simply an arrangement between the military who are entrusted with Sudan and some technocrats who are running the day-to-day government or governing under their leadership, the military leadership and that this arrangement is no longer working for the good of the people of Sudan,” he said.

“So the idea that Sudan has gone through major popular upheaval and brought about civilian government after 30 years of military dictatorship does not exist for the Sudanese generals.”

The Arab League has released a statement of “deep concern” about the apparent military coup in Sudan.

The Secretary-General of the 22-member bloc, Ahmed Aboul Gheit, urged all parties to “fully abide” by the constitutional declaration signed in August 2019, which had aimed to pave the way for a transition to civilian rule and democratic elections.

“There are no problems that cannot be resolved without dialogue,” Aboul Gheit said. “It is important to respect all decisions and agreements that were decided upon … refraining from any measures that would disrupt the transitional period and shake stability in Sudan.”

The United Nations has said that Sudanese security forces’ detention of civilian leaders including PM Abdalla Hamdok was “unacceptable”.

“I am deeply concerned about reports of an ongoing coup and attempts to undermine Sudan’s political transition. The reported detentions of the Prime Minister, government officials, and politicians are unacceptable,” said Volker Perthes, UN special representative to Sudan.

“I call on the security forces to immediately release those who have been unlawfully detained or placed under house arrest,” he said in a statement on Twitter.

The deputy chairman of the Sudan People’s Liberation Movement-North (SPLM-N), Yasir Arman, was arrested from his home, his Twitter account says.

Arman was an advisor to Prime Minister Abdalla Hamdok after his armed group signed a peace deal in 2020 with transitional authorities and promised to integrate within the army.

The European Union has expressed grave concern about a possible military takeover under way in Sudan.

“The EU calls on all stakeholders and regional partners to put back on track the transition process,” Borrell wrote.

The EU calls on all stakeholders and regional partners to put back on track the transition process.

Soldiers has stormed the headquarters of Sudan’s state broadcaster and detained some employees, the information ministry says, as part of what it has called a “coup”.

“Joint military forces have stormed the TV and radio headquarters in Omdurman and detained a number of staff,” the ministry said in a statement posted on Facebook.

Sudan is facing a full military coup, the information ministry has said, urging the immediate release of all detainees.

The Sudanese people should try to stop the military’s efforts to block democratic transition, it added in a statement to Reuters news agency.

“We invite everyone to continue the march until the coup attempt is brought down,” it said.

Al Jazeera’s Hiba Morgan, reporting from Khartoum, said “telecommunications access has been restricted” in the country “so it’s very hard to communicate with people here”.

“The military has also blocked all roads and bridges leading into Khartoum city. We’ve seen soldiers blocking access and they are telling us these are the orders they got,” she said.

“They are saying access to Khartoum city is to be restricted, and this is raising concern because that’s where the government institutions are, that’s where the presidential palace and the prime minister’s offices are located.”

Hamdok being held in unknown location

Sudan’s Prime Minister Abdalla Hamdok was moved to an unknown location after refusing to issue a statement in support of a continuing military coup, the information ministry said.

Joint military forces holding Hamdok under house arrest were pressuring him to issue a supportive statement, the information ministry said earlier on Monday.

It cited Hamdok calling on the Sudanese people to resist the coup attempt peacefully and “defend their revolution”.

US expresses alarm at reports of military takeover

The United States said it was “deeply alarmed” at reports of a military takeover in Sudan.

“The US is deeply alarmed at reports of a military take-over of the transitional government,” said US Special Envoy for the Horn of Africa, Jeffrey Feltman.

“This would contravene the Constitutional Declaration (which outlines the transition) and the democratic aspirations of the Sudanese people,” he said, according to a statement on Twitter.

← DC Assistant Police Chief Was Told To Get An Abortion Or Be Fired – Black Media Daily ← An Epidemic Within the Pandemic: Police Killings of African American Men