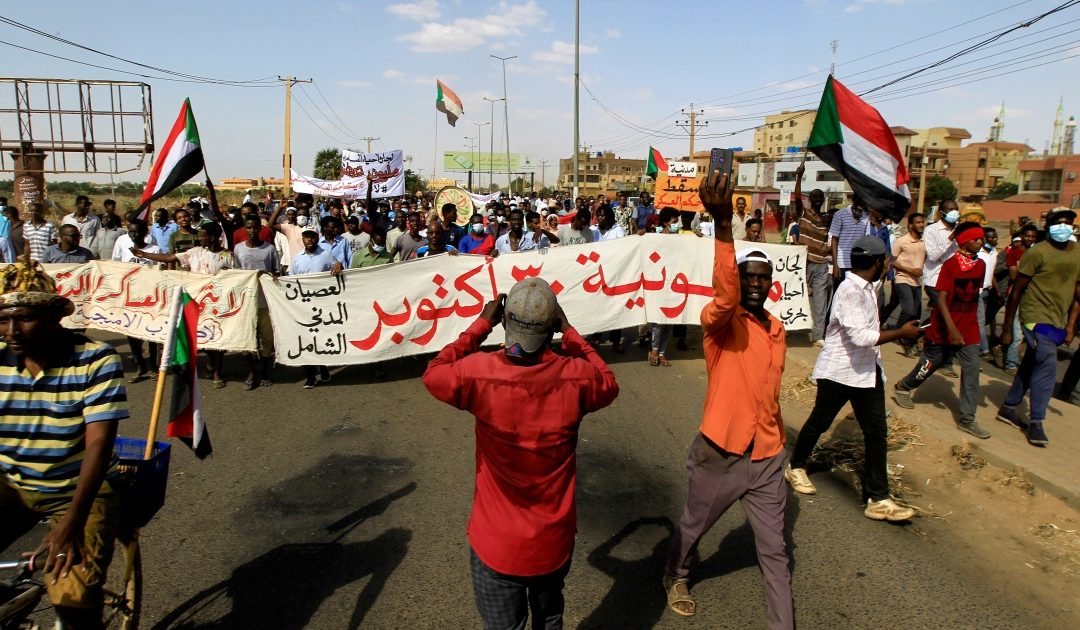 Hundreds of anti-coup protesters rallied on Sunday in the capital Khartoum, as well as in its twin city of Omdurman, Wad Madni to the south, and the northern city of Atbara.

Dozens of teachers carried banners reading “No, no to military rule” and called for a transition to “full civilian rule” at a rally outside the education ministry in Khartoum.

The international community has since accelerated mediation efforts to find a way out of the crisis, which threatens to further destabilise the already restive Horn of Africa region.

Pro-democracy protesters have taken place since the October 25 coup but have been met by a deadly crackdown. At least 14 demonstrators have been killed and about 300 wounded, according to the independent Central Committee of Sudan’s Doctors.

“We organised a silent stand against the decisions by al-Burhan outside the ministry of education,” said Mohamed al-Amin, a geography teacher, told the AFP news agency.

“Police later came and fired tear gas at us though we were simply standing on the streets and carrying banners,” he said.

There were no immediate reports of casualties but a union of Sudanese educators said “a large number of teachers were detained”.

The teachers’ rally came after the military replaced heads of departments at the education ministry, as part of sweeping changes it made in multiple sectors.

“The protest rejects the return of remnants of the old regime” of deposed president Omar al-Bashir, the teachers union said in a Facebook post.

Sunday’s rallies followed calls for civil disobedience made by the Sudanese Professionals Association (SPA), an umbrella of unions that were instrumental in the 2018-2019 protests which toppled the longtime strongman leader al-Bashir in April 2019.

“The Sudanese people have rejected the military coup,” the SPA said on Twitter, vowing “no negotiation, no partnership, no legitimacy”.

“We will start by barricading the main streets to prepare for the mass civil disobedience on Sunday and Monday,” it said, urging protesters to avoid confrontation with the security forces.

The SPA circulated its latest appeals via text messages to bypass internet outages since the coup.

Since late Saturday, protesters were seen piling up bricks and large slabs to block streets in Khartoum and neighbouring cities.

By Sunday morning, some shops were still open but others were shuttered in Khartoum and its twin cities of Omdurman and Khartoum-North, according to witnesses.

“Movement on the streets is less than usual but there is not full blockage of streets or closure of shops” after the civil disobedience call, a witness from Omdurman who declined to give his name fearing reprisals told AFP.

Some hospitals and medical staff were working normally while others were on strike.

Al Jazeera’s Hiba Morgan, reporting from Khartoum, said many barricades erected by protesters to hinder movement in the capital had been dismantled by the security forces and by civilians.

“Protesters say that these barricades have become a symbol of their resistance to the military takeover,” she said.

The latest resistance effort came almost two weeks after al-Burhan dissolved the government as well as the ruling joint military-civilian Sovereign Council that was supposed to lead the country towards full civilian rule.

The Arab League, which has called for Sudanese parties to stick to the democratic transition after the army took over power, had said on Saturday that it would send a high-level delegation to Khartoum.

On Thursday, the military released four civilian members of his government but other key figures remain in detention.

“We call upon the military leadership to cease arresting politicians and activists and to stop committing human rights violations,” Perthes said in a statement on Friday.

The military takeover sparked international condemnation, including punitive aid cuts and demands for a swift return to civilian rule.

Al-Burhan insists it “was not a coup” but a move to “rectify the course of the transition”.

Al Jazeera’s Morgan said protesters are now calling for a complete dissolution of the power-sharing agreement that was signed in 2019 between the army and civilian leaders.

“They say that they want to see the army return to its barracks and have no role in governing the country and its politics,” she said.

“Mediation efforts to try to bridge the gap between Prime Minister Abdalla Hamdok and the civilian coalition on the one side, and the army on the other side, are yet to produce any results,” she added.

Earlier this week, Nureldin Satti, Sudan’s ambassador to the United States, told Al Jazeera’s UpFront programme that the coup “cannot continue with the mobilisation that we have seen and that we are going to see in the next days and weeks”.