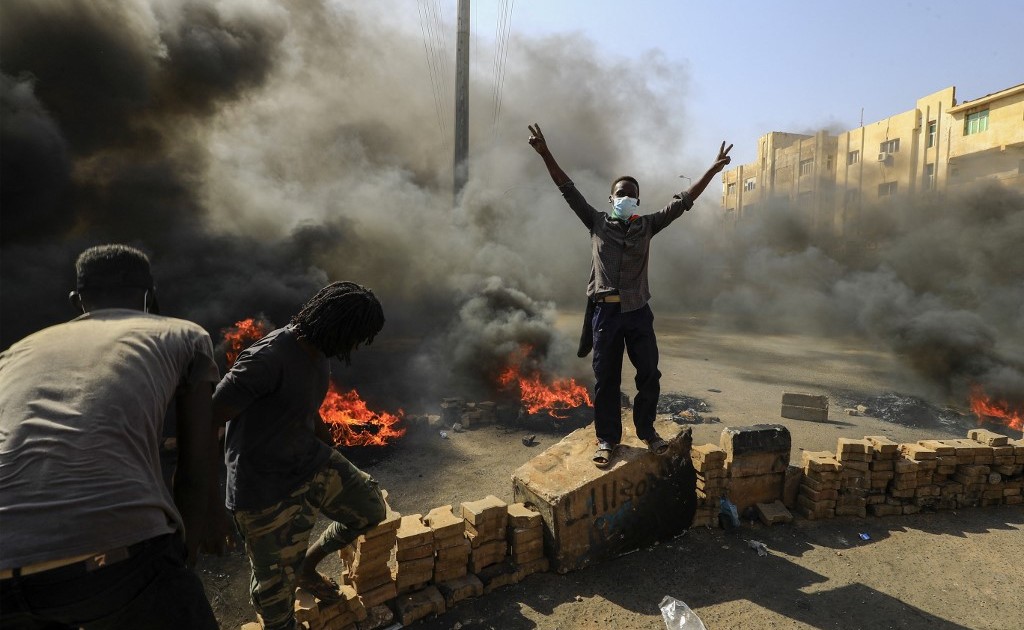 Sudan’s military seized power from a transitional government and killed at least three people and wounded 80 as street protests broke out against the takeover.

Thousands of protesters poured into the streets of the capital, Khartoum, and its twin city of Omdurman following the early morning arrests of Prime Minister Abdalla Hamdok and other senior officials by security forces in the country.

The leader of the takeover, General Abdel Fattah al-Burhan, dissolved the military-civilian Sovereign Council that had been set up to guide the country to democracy following the overthrow of longtime leader Omar al-Bashir in a popular uprising two years ago.

Al-Burhan, who is also the head of the power-sharing governing council, declared a state of emergency across the country, saying the armed forces needed to ensure safety but promising to hold elections in July 2023 and hand over to an elected civilian government then.

“What the country is going through now is a real threat and danger to the dreams of the youth and the hopes of the nation,” he said.

Hamdok, an economist and former senior UN official who was appointed as a technocratic prime minister in 2019, was moved to an undisclosed location after he refused to issue a statement in support of the coup, the information ministry said.

Thousands of Sudanese who oppose the takeover took to the streets and faced gunfire near the military headquarters in Khartoum. In Khartoum’s twin city Omdurman, protesters barricaded streets and chanted in support of civilian rule.

The Forces of Freedom and Change, Sudan’s main opposition coalition, called for civil disobedience and protests across the country and demanded that the transitional military council transfer power back to the civilian government.

Sudan’s central bank employees said they went on an immediate strike in rejection of the military coup, the Sudanese information ministry wrote on its page on Facebook.

Speaking to Al Jazeera, Hala al-Karib, a Sudanese activist for women’s rights in the Horn of Africa, said that Sudan was going through “very grim moments in its history” as it stands at “a crossroads”.

She called on the international community to pressure the military to respect the Constitution and agreements with the civilian council.

“The military has dishonoured its agreement with the civilian government by detaining the prime minister and several cabinet ministers,” said al-Karib. “The Sudanese people don’t know if they are safe or not.”

The country had been on edge since last month, when a failed coup plot blamed on supporters of al-Bashir set off recriminations between the military and civilians in the transitional cabinet.

In recent weeks, a coalition of rebel groups and political parties aligned themselves with the military and called on it to dissolve the civilian government, while cabinet ministers took part in protests against the prospect of military rule.

The coup also came just weeks before the military was supposed to hand over the leadership of the council that runs the country to civilians.

Washington had tried to avert the collapse of the power-sharing agreement by sending a special envoy, Jeffrey Feltman.

Department of State spokesman Ned Price on Monday urged for the immediate restoration of a civilian government. “The civilian-led transitional government should be immediately restored and represents the will of the people,” he told reporters.

“In light of these developments, the United States is pausing assistance” meant for economic support, he said. The United States had allocated $700m to support the country’s democratic transition.

UN Secretary-General Antonio Guterres called for the immediate release of Sudan’s prime minister and all other officials.

“I condemn the ongoing military coup in Sudan. Prime Minister Hamdok & all other officials must be released immediately. There must be full respect for the constitutional charter to protect the hard-won political transition. The UN will continue to stand with the people of Sudan,” Guterres wrote on Twitter.

I condemn the ongoing military coup in Sudan. Prime Minister Hamdok & all other officials must be released immediately. There must be full respect for the constitutional charter to protect the hard-won political transition. The UN will continue to stand with the people of Sudan.

EU foreign policy chief Josep Borrell said in a statement that violence and bloodshed should be avoided at all costs in Sudan.

“The actions of the military represent a betrayal of the revolution, the transition, and the legitimate requests of the Sudanese people for peace, justice and economic development,” he said. “We call on the security forces to immediately release those they have unlawfully detained.”

The United Kingdom said the military coup in Sudan was an “unacceptable betrayal of the Sudanese people” and called on security forces there to release Hamdok.

In a statement posted on the commission’s Twitter account, Mahamat said he was alarmed at the developments which led to the arrest of Hamdok and other civilian officials.

The secretary-general of the Arab League, Ahmed Aboul Gheit, urged all parties to “fully abide” by the constitutional declaration signed in August 2019, which had aimed to pave the way for a transition to civilian rule and democratic elections.

Sudan has been ruled for most of its post-colonial history by military leaders who seized power in coups. It had become a pariah to the West and was on the US terrorism blacklist under al-Bashir, who hosted Osama bin Laden in the 1990s and is wanted by the International Criminal Court in the Hague for war crimes.

← 2246: Psychedelics Fix Racism by The Black Guy Who Tips Podcast ← DC Assistant Police Chief Was Told To Get An Abortion Or Be Fired – Black Media Daily