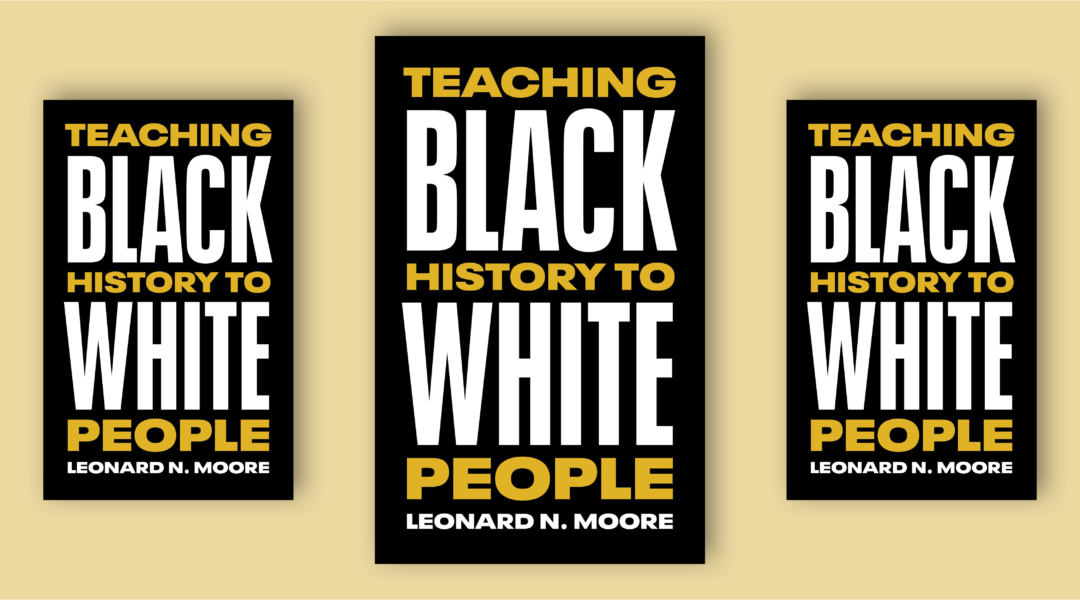 Moore offers six specific steps that white Americans (and other non-Black people) can take to improve America’s racial climate. Excerpted below are steps 4-6.

Microaggressions are similar to stereotypes; they are more subtle but equally painful. Recently, a colleague and I were in a meeting and  the person we were waiting for walked in, looked at me, and said, “How you doing, Dr. Gordon?” I’ve been called Dr. Gordon, Dr. Harrison, and Dr. Smith. What do we all have in common? We are all Black men who are professors at the University of Texas at Austin. We look nothing alike. Do you know what it’s like to show up to an event and they give you the name badge of another Black person? Black people do not complain, because it doesn’t do any good, but we just need to share some of these stories.

A lot of people who claim to be liberal are some of the biggest offenders when it comes to microaggressions and micro-invalidations. Don’t assume that all the Black women on campus are there to run track or that the Black men are there to play football or basketball. I had a student who was five-foot-five and he was still stereotyped as a football player. Now, some of you may think, “Well, that’s not a bad stereotype,” but to the student it is. Because what is being suggested is that the only reason they are on campus is because of their athletic ability.

“Well, I don’t know. I thought you were out here recruiting.”

On several occasions I have arrived at events where I’m the keynote speaker,  and typically I’ll introduce myself to the organizer just to let them know that I’m there. I’ll typically say, “I’m Leonard Moore from the University of Texas.” They introduce themselves, and on more than one occasion they will say, “Good to meet you. What time is Dr. Moore coming?” I will say, “I don’t know. Hopefully he will be here soon.” These are real experiences. If I deal with these things as a Black man, what do my Black female counterparts often deal with? At times, microaggressions can become outright hostile for Black women. A Black female colleague was confronted by a white male colleague who stood in her office doorway shortly after she was hired and said, “I don’t understand why they’re paying you that much money!”

The constant stereotyping and microaggressions confirm what many Black people were told by their parents and grandparents: “You gotta work twice as hard to go half as far.” To get ahead in the workplace, we embrace John Henry–ism. “I’m going to just work harder, and  harder, and harder, then I’ll get the promotion.” I was in full-blown John Henry–ism during my years at LSU. A lot of Black professionals take on extra assignments and duties without receiving adequate compensation. We do that because we feel that we have to prove ourselves. But in doing that we work ourselves to death, and we still don’t get promoted to the level of our abilities.

I want to talk about the importance of getting uncomfortable. Your political affiliation doesn’t matter. (You may say you’re a liberal, but I know a lot of liberals who value trees and the environment more than people.) Some of us are narrowly trained in our area of expertise but we need specific training around racial injustice. We don’t like to go to training because it makes us feel uncomfortable. The first time I went to an anti-sexism training, I was uncomfortable because I didn’t realize how a lot of my unconscious actions contributed to sexism. Similarly, many white people don’t understand how some of their unconscious actions contribute to an unhealthy racial climate. Anybody can handle budgets or create a strategic plan, but can you navigate the tricky waters of race and racial justice? Discomfort is the fertilizer for growth. If the lived experiences of Black people make you upset, then you need to sit with the discomfort and ask yourself why.

Whenever I teach my Black Power class I always have white alumni sit in on the class. One semester an older white gentleman in his early seventies came to every class. On the last day of class I had him stand up and the students gave him a standing ovation. He said, “Dr. Moore, this has been the greatest experience of my life.” In my Race in the Age of Trump class I often have many white students who enroll in the class, but their parents are reluctant to let them take it. One student told me that at the end of every class she would have to take a picture of her notes, email them to her mom, and at night they would discuss the notes as well as the class readings. Apparently, the mom did this because she didn’t want her daughter taking my class and “becoming a liberal.” By the end of the semester the mom had transformed from a helicopter parent to a convert. She sent me an email and thanked me for changing her perspective.

A way to ease yourself into the discomfort and to learn more about American history, the civil rights movement, and race relations is to do a civil rights tour throughout the great state of Mississippi. You can start in Jackson, Mississippi, at the new civil rights museum, which I think is one of the best museums in the country, and then you can work your way up north through the Mississippi Delta, ending at Memphis, Tennessee. It will be worth your time and money.

“What Can I Help You Fight For?”

Many well-meaning white people are often curious about what they can do to help calm racial tensions. Instead of asking, “What can I do?” I recommend you ask a more profound question, “What can I help you fight for?”

About ten years ago, I took a group of students from my church to East Austin, which at the time was predominantly African American and low-income. Our intent was to canvas the neighborhood and ask residents what issues were important to them. Prior to the outing I asked the students what they thought the community needed. They talked about after-school programs, high-quality childcare, job training programs, a grocery store, more recreational opportunities, and a litany of social programs. They were wrong. The residents of the community wanted speed bumps. Yes, speed bumps. Why? Because a lot of kids in the neighborhood were getting hit by cars during rush hour as commuters used the side streets in East Austin to avoid traffic jams. This was a profound experience for my students, who learned that you must allow a community to tell you what their needs are instead of just assuming you know.

Around the country right now there’s a lot of energy on college campuses directed toward taking down Confederate statues and changing building names. But some of that stuff is so woven into the bricks and mortar of an institution that you may never be able to get rid of it all. While I think the typical Black student would agree that these symbolic gestures are important, I believe that they would see other issues as more of a priority. Many of them would like to see an increase in Black enrollment, more Black faculty and staff, and a significant increase in scholarship money for African American students. But many white liberals have co-opted Black activism on America’s college campuses to such an extent that the actual demands of Black students aren’t even heard. So we have white liberals expressing what they think is best for Black students without even consulting them.

A few years ago, I was asked to mediate a dispute between a Black law school professor and his disgruntled students, who were upset about a question on an exam. On the exam the professor asked the students to provide a legal defense of school segregation. I thought it was a brilliant question. Before I arrived at the meeting I predicted that the group of angry students were largely white liberals. I was correct. In the group of students I met with, only one was Black. The spokesperson for the group was a white male student who seemed rather happy that he was able to call out his Black professor. The students were up in arms. During our meeting they said the question was “traumatizing” and “triggering” and that they should not be forced to answer it. But it went further. They wanted the professor disciplined. They also demanded that the professor be banned from teaching first-year students and that a committee of faculty approve all of his exam questions moving forward. After listening to their complaints, I said, “This has y’all really upset, huh?” They said, “Yes.” Then I asked the following question that changed the entire trajectory of the conversation: “How come you all aren’t equally upset that this law school enrolled only ten Black students this year out of an entire class of three hundred?” The room fell silent. In defense of the law students, I believe they meant well. But they were misguided. They got caught up in symbolism and not substance. This is what happens when you assume you know what Black people really want. If you want to really be an ally, to do something radical, ask Black people a simple question: “What can I help you fight for?”