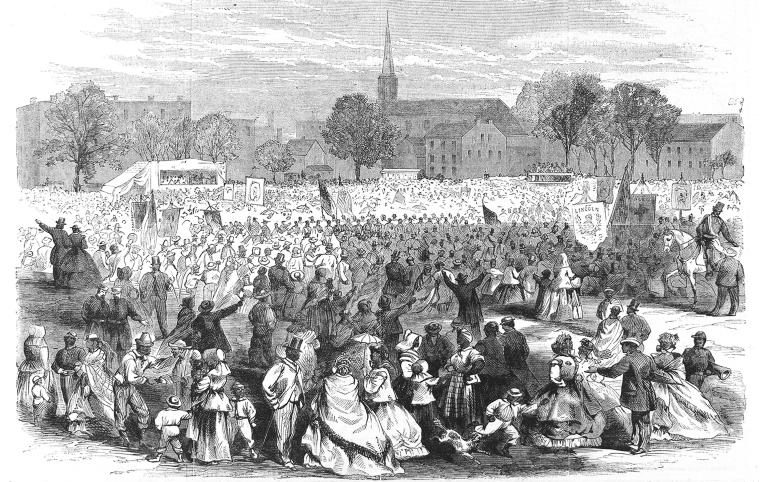 Shortly after the new U.S. Congress had assembled last December, Republican Senator Henry Wilson of Massachusetts introduced a bill abolishing slavery in the District of Columbia. The District, located between the slaveholding states of Maryland and Virginia, had permitted slavery since its creation over a half a century before. For a time, slaves had even been held in stockades and auctioned off near the U.S. Capitol. The 1850 ban on slave trading in the District of Columbia ended that practice, but slavery remained legal there nonetheless.

Unlike the states, the District was under Federal jurisdiction, meaning that Congress could enact legislation regulating its domestic affairs. Measures to free slaves in the District had been repeatedly introduced in Congress over the past generation; Abraham Lincoln himself had drafted an emancipation bill as an Illinois congressman in 1849. All these bills had been rejected, largely due to southern opposition to the Federal government infringing on property rights. But the southern congressmen were gone now, and the Republicans now dominating Congress were committed to restricting or abolishing slavery wherever they could. Thus, Wilson introduced the measure once again.

Under this bill, $1 million would be appropriated to compensate slaveholders for their loss of labor if they could prove loyalty to the U.S. The 1860 census had counted 3,185 slaves in the District worth an estimated $2 million, but since then many slaveholders had gone south, and with those remaining having questionable loyalty, most Republicans considered the $1 million to be a more reasonable figure to pay.

Debate began on the measure in March, and it soon became more contentious than “in any other session of the American Congress on record.” The original bill had seven sections, but seven more amendments were added between December and March. The amendments included:

Congressmen from the loyal slave states (i.e., Delaware, Maryland, Kentucky, and Missouri), led by Senator Garrett Davis of Kentucky, opposed this measure. Davis introduced an eighth amendment requiring all freed slaves to be colonized (i.e., deported). Since most abolitionists opposed colonization, Davis only introduced this provision to force them to oppose the overall emancipation bill.

Davis also believed that blacks would not “consent to be colonized, when liberated,” because the only form of liberation they knew was “freedom from work.” He warned that freed slaves would turn into “criminals; they will become paupers. They will be engaged in petty crime and misdemeanors.” Davis supported the Union, and he worried that freeing the slaves in the District might drive loyal residents to the South. Colonization, therefore, was the only logical next step after emancipation.

The Senate vote on Davis’s amendment ended in a 19 to 19 tie. Vice President Hannibal Hamlin broke the tie by voting against it. Davis declared, “My right to my land and my right to my slave are of the same origin and nature. They are identically the same… and there is no constitutional right on the part of the… Congress of the United States… to abolish slavery in the States, in the District of Columbia, or anywhere else.” He predicted that if the bill passed, it would be challenged in the courts, where it would be ruled unconstitutional and repealed.

Republican Charles Sumner of Massachusetts, one of the most outspoken abolitionists in the Senate, responded to Davis by asserting that “in the eye of the Constitution, every human being within its sphere, whether Caucasian, Indian, or African, from the President to the slave, is a person, not property.” Even so, Wilson accepted a compromise on the colonization issue in which a provision would be added earmarking $100,000 to deport freed slaves if they agreed to leave the U.S.

The Senate debate raged through March and finally ended in early April when moderate Republicans William P. Fessenden of Maine and Orville Browning of Illinois switched their votes and endorsed the emancipation bill. Fessenden explained why he changed his vote: “The object and purpose of this war was not to affect slavery in the States, but to uphold the Constitution and the laws of the land. But, sir, I did not say, nor did the party to which I belong ever say, that it pledged itself to do nothing that indirectly might affect the institution of slavery.”

Davis made one more speech declaring slaves to be property because, referring to the Dred Scott v. Sanford (1857) ruling, “it has been expounded by the Supreme Court.” Others opposed the measure because the payoff amount equated to just $300 per slave, far less than current market value. Washington city aldermen also resisted the idea out of fear that letting blacks live free in the city could spark racial violence. They lobbied Congress to add a provision expanding the capital’s police force.

Despite the opposition, the Senate approved the bill on April 3 by a vote of 29 to 14. The bill then went to the House of Representatives, which had a much larger Republican majority. John J. Crittenden of Kentucky, author of the ill-fated Crittenden Compromise and the Crittenden-Johnson Resolutions, delivered a speech urging his colleagues to oppose the measure, but to no avail. The bill passed easily in the House, 92 to 38. With both chambers approving the measure by over two-thirds, it went to President Lincoln to sign into law.

Being a moderate Republican, Lincoln spent two days pondering whether he should sign. He was especially troubled by the law’s provision for immediate emancipation rather than gradual. This threatened to leave elderly slaves and slave children whose parents had been sold outside the District without the means to provide for themselves; it also threatened to leave widows who owned slaves destitute because they would now have no means of support.

Lincoln finally signed the bill into law on the 16th and sent it back to Congress with a message of approval. He wrote, “I have never doubted the constitutional authority of Congress to abolish slavery in the District, and I have ever desired to see the national capital freed from the institution in some satisfactory way. Hence there never has been in my mind any questions upon the subject, except those of expediency, arising in view of all the circumstances.”

However, he noted, “I am a little uneasy about the abolishment of slavery in this District, not but I would be glad to see it abolished, but as to the time and manner of doing it.” Lincoln would have much preferred that “some one or more of the border-states… move first” voluntarily. Lincoln finally expressed satisfaction that “the two principles of compensation, and colonization, are both recognized, and practically applied in the act.”

Blacks celebrated throughout the District. A spontaneous convention was held on the night of the 16th, during which famed abolitionist Frederick Douglass declared, “I trust I am not dreaming but the events taking place seem like a dream.” Diarist George Templeton Strong wrote, “Only the damndest of ‘damned abolitionists’ dreamed of such a thing a year ago.”

Others were not so happy with this law. A landlord wrote, “Since the abolition bill has freed the negroes, already our alms house is crowded with them to overflowing… They are made up of all the old crippled & diseased negroes who would have been taken care of by their masters.” A Treasury employee noted, “The old citizens, especially those who have been slaveholders, are bitter and heartless toward all the colored race.”

A commission was created to attach value to each slave, with no slave worth more than $300. Slaveholders had 90 days to submit a list of their slaves’ names, ages, and descriptions for the commissioners to review and compensate accordingly. About 1,000 slaveholders submitted claims to the commission and received compensation. A small number were rejected, usually due to questionable ownership rights or suspected Confederate sympathies.

Although the slaves may have been freed, they were not considered equal to whites. They did not have the right to vote or serve on juries, and they had no access to District schools or transportation. They also had to be careful not to venture into Maryland or Virginia, where they could be captured and sent back into slavery. Slaveholders in those neighboring states began selling their slaves to points farther south out of fear that they would try to escape to freedom in the nearby District. However, those slaves were still subject to be returned to their masters under the Fugitive Slave Act.

The District Emancipation Act was a partial victory for President Lincoln, who had envisioned a program of gradual, compensated emancipation as a means of ending slavery. But freeing slaves in the District where the Federal government had jurisdiction was far different than trying to free them in states that had legal control over their own domestic institutions. This also marked the first step toward Lincoln’s supplemental plan of deporting freed slaves; Lincoln considered colonization to be the best way to address the issue of freed slaves competing with resentful whites for jobs.

Abolitionists hailed this measure as a first step toward full emancipation. Slaveholders in both North and South condemned the law for the same reason.