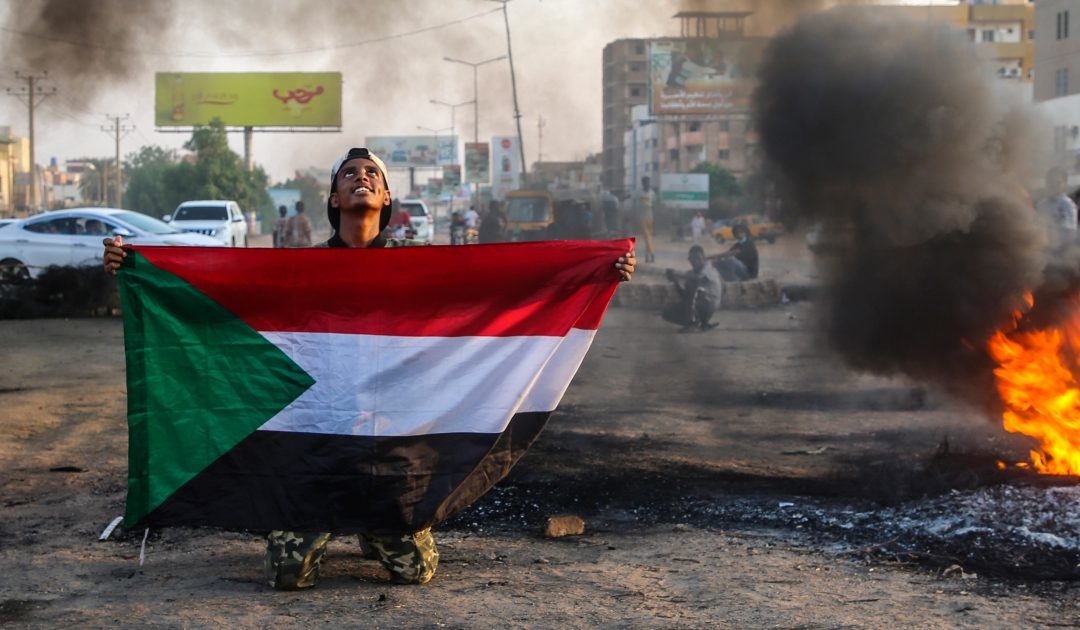 Thousands of anti-coup protesters in Sudan took to the streets to demand the restoration of a civilian-led government in “Million of October 30” demonstrations.

The protesters have called for a return to a path to democracy, as they rejected military measures and demanded the release of detainees.

According to Sudan TV, Sudanese security forces closed the majority of main roads and bridges in Khartoum, with the exception of the Halfaya and Soba bridges.

Tens of thousands of Sudanese this week have already protested against General Abdel Fattah al-Burhan’s removal of Prime Minister Abdalla Hamdok’s cabinet on Monday, in a military takeover that triggered a deadly crackdown against protesters and led Western states to freeze hundreds of millions in aid.

With at least 11 people killed by security forces and several pro-democracy activists detained, opponents of the military government fear a full-blown crackdown and more bloodshed.

Still, the protesters remained defiant, with organisers hoping to stage a “million-strong” march against the military’s power grab.

According to an Al Jazeera correspondent, authorities imposed restrictions on the Internet and phone lines, prompting protesters to mobilise to protest using leaflets, text messages, graffiti, and neighbourhood rallies.

Police and military presence on the island side of Tuti Bridge in Khartoum. #SudanCoup#Oct30March
#موكب30اكتوبر#مليونية30اكتوبر#الردة_مستحيلة#KeepEyesOnSudan https://t.co/6KB9Vdjp3G

“We will not be ruled by the military. That is the message we will convey” at the protests, said rights activist Tahani Abbas. “The military forces are bloody and unjust and we are anticipating what is about to happen on the streets,” Abbas added. “But we are no longer afraid.”

An activist who gave his name as Mohamed said “the army should go back to its barracks and give the leadership to Hamdok”.

“Our demand is a civilian country, a democratic country, nothing less than that,” added Mohamed, who also plans to protest.

The United States, which denounced the coup and called for the restoration of the civilian-led government, said how the army reacts on Saturday will be a test of its intentions.

US Secretary of State Antony Blinken said Sudan’s security forces must respect human rights and any violence against peaceful demonstrators is “unacceptable”.

The US continues to stand with “Sudan’s people in their nonviolent struggle for democracy,” he said in a Twitter post.

With internet and phone lines restricted by the authorities, opponents of the coup have sought to mobilise for the protest using fliers, SMS messages, graffiti and neighbourhood rallies.

Neighbourhood-based resistance committees, active since the mass uprising against deposed President Omar al-Bashir that began in December 2018, have been central to organising despite the arrests of key politicians.

Al-Bashir, who ran Sudan for nearly three decades, was deposed by the army in April 2019 following months of protests against his rule.

This is a reminder to the world that today is day 6 of a complete & inhumane media, phone-line & internet black-out in Sudan. Enforced by the military for the sole purpose of isolating, defeating, traumatising & violating Sudanese civilians. #HumanRights #SudanCoup #Oct30March

Khartoum committee activist Hussam Ibnauf said the protest date had been well-advertised and he was confident of a big turnout.

“Everyone on the street … they know about October 30. If they know, the rest is easy,” he said.

There was now “no fear factor”, he said.

Al-Burhan has insisted the military takeover “was not a coup” but only meant to “rectify the course of the Sudanese transition”, saying he is still committed to a democratic transition, including elections in July 2023.

Hamdok, an economist, was initially held at al-Burhan’s residence when soldiers rounded up senior government officials on Monday, but was allowed to return home under guard on Tuesday.

A US State Department official said Hamdok was, however, still under house arrest and unable to resume his work.

The US official said tens of billions of dollars of debt relief sought by Sudan would not happen as long as the army was attempting to direct Sudan unilaterally. The US and the World Bank have already frozen assistance to Sudan, where an economic crisis has seen shortages of basic goods including food and medicine and where nearly a third of the population requires urgent humanitarian support.

Several mediation efforts have emerged but there has been no sign of progress towards a compromise.

On Friday, UN Secretary-General Antonio Guterres called on the military to show restraint as he reaffirmed his “strong condemnation” of the coup.

“People must be allowed to demonstrate peacefully,” Guterres said.

Many pro-democracy protesters oppose a compromise with an army of which they are deeply mistrustful following several coups since independence in 1956.

Friction had been mounting between the civilian government and the army leading up to the latest takeover. One point of tension had been the pursuit of justice for alleged atrocities in Darfur in the 2000s, with the International Criminal Court asking Sudan to hand over al-Bashir.

“All those who accept or participate in dialogue with the military do not have the street’s support,” the Sudanese Professionals Association, which had spearheaded the protests against al-Bashir, said in a statement, demanding the full handover of power to civilians.

Magdi el-Gizouli, a political analyst, said al-Burhan’s calculation is that he can suppress the opposition by force if needed, while counting on the backing of people who crave stability.

While it was important that the army avoid violence on Saturday, al-Burhan’s opponents must make realistic demands, he added.