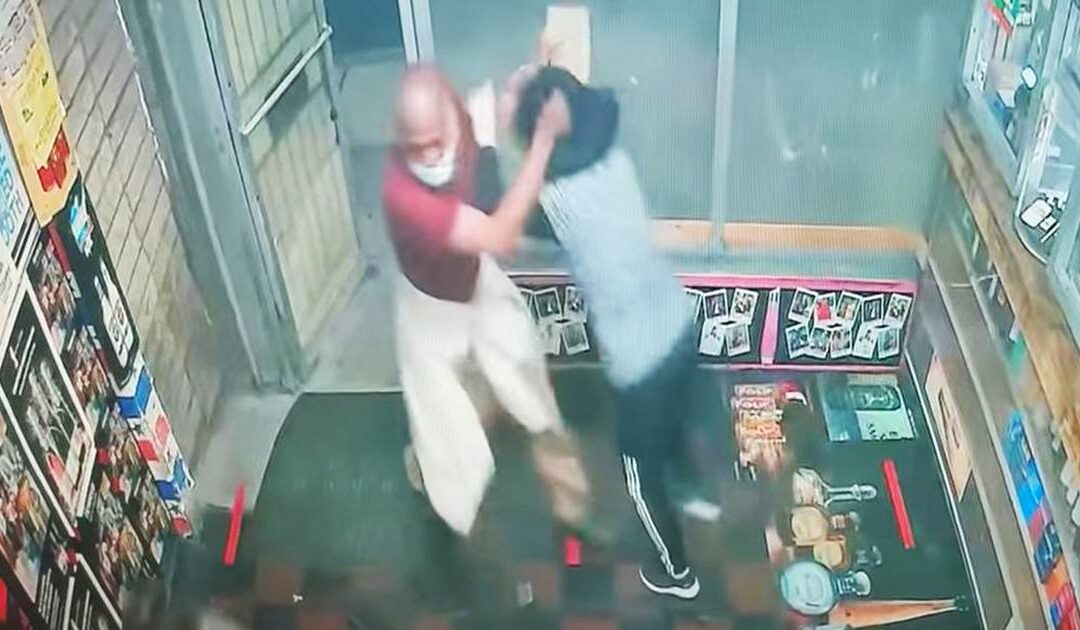 A man was arrested after he repeatedly attacked two Asian women, ages 66 and 67, with a cinder block at a Maryland liquor store early Tuesday, police said.

Daryl Doles, 50, was charged with two counts of aggravated assault, police said. Authorities did not specify if the incident was being treated as a hate crime.

The attack on the two Asian women unfolded shortly after midnight at a liquor store in the 2000 block of Pennsylvania Avenue in Baltimore, police said. The women were store employees and closing up shop when a man broke into the store, authorities said.

Surveillance video showed a man forcing his way into the store and wrestling with one of the women as she tried to close the door. The footage captured another unidentified man inside the store who appeared to watch, step aside and walk out the door shortly after the woman was pulled to the ground.

The first man, later identified as Doles, can be seen in the video repeatedly striking the woman in the head with a cinder block, according to authorities, as he holds her down with his body. Another woman from inside the store appears to help the woman on the floor before being overwhelmed by the man.

Video showed the man then hitting the women multiple times in the head with the cinder block before the brutal attack was taken outside the store. He took off from the scene, but was later arrested, authorities said.

Both women were taken to the hospital and treated for injuries that were not life-threatening, police said.

Photos posted on a GoFundMe fundraising page for the victims showed the women’s bruised and swollen faces. John Yun, who said that he was the son of one of the victims and nephew of the other, wrote that his aunt suffered black eyes and had to get more than 25 stitches on her head.

“We are relieved that both of their CT scans came back good and were discharged hours later,” Yun wrote.

Robert Hur, former Maryland U.S. Attorney, head of the state’s Hate Crime Task Force, and the victims’ lawyer, told NBC News in a statement that his clients were “recovering from their serious injuries.”

“While we are still learning the facts, one thing is clear: Such shocking acts of violence against fellow members of our neighborhoods cannot go on,” Hur said in a statement. “The family is grateful for the outpouring of sympathy and support.”

“I urge everyone to do all we can to raise awareness and to speak out against bias, hate, and violence against any members of our city and community, including Asian Americans,” he said.

The names of the women were not immediately released.

Efforts to reach Doles by phone numbers listed for him were unsuccessful Wednesday. It was unclear if he had an attorney.

Gov. Larry Hogan said he was “outraged” by Tuesday’s assault.

“It’s just another example of these violent outbursts and attacks on Asians all across the country,” Hogan said at a Tuesday news conference. “It was pretty hard to watch the two elderly women being smashed in the head with a brick.”

The brutal assault was the latest in a string of attacks against Asian Americans across the country.

A man was arrested in the stabbing of two Asian women who were waiting for a bus in San Francisco on Tuesday afternoon, police said. The women, ages 85 and 65, were taken to the hospital, where they were stable, said Matt Haney, a district supervisor on the city’s board of supervisors.

Authorities have not called the attack a hate crime or released a suspected motive.

On Sunday, an Asian woman was attacked with a hammer by a stranger who demanded she remove her mask, police said. The 31-year-old woman was taken to the hospital for a laceration to the head. The New York Police Department’s Hate Crimes Task Force is investigating the assault, but no arrests have been made as of Wednesday afternoon.

And in late March, a man repeatedly kicked a 65-year-old Asian woman outside a luxury apartment building as witnesses appeared to watch.

Authorities arrested the suspect, who was already on lifetime parole for fatally stabbing his mother in 2002. The two apartment building doormen who were caught on video appearing to watch the attack unfold were fired, the building’s owner said.

Last week, a new analysis of hate crime data revealed that the increase in anti-Asian attacks has remained consistent.

The research, released by the Center for the Study of Hate and Extremism at California State University, San Bernardino, found that hate crimes surged 169 percent when comparing the first quarter of 2021 to the same time period in 2020 across 15 major cities.

A report from the center in March showed that hate crimes increased by nearly 150 percent in major cities last year.

← Peloton reverses course, recalling all treadmills after safety concerns and one death ← Atlanta board reverses firing of officer charged in Rayshard Brooks’ death