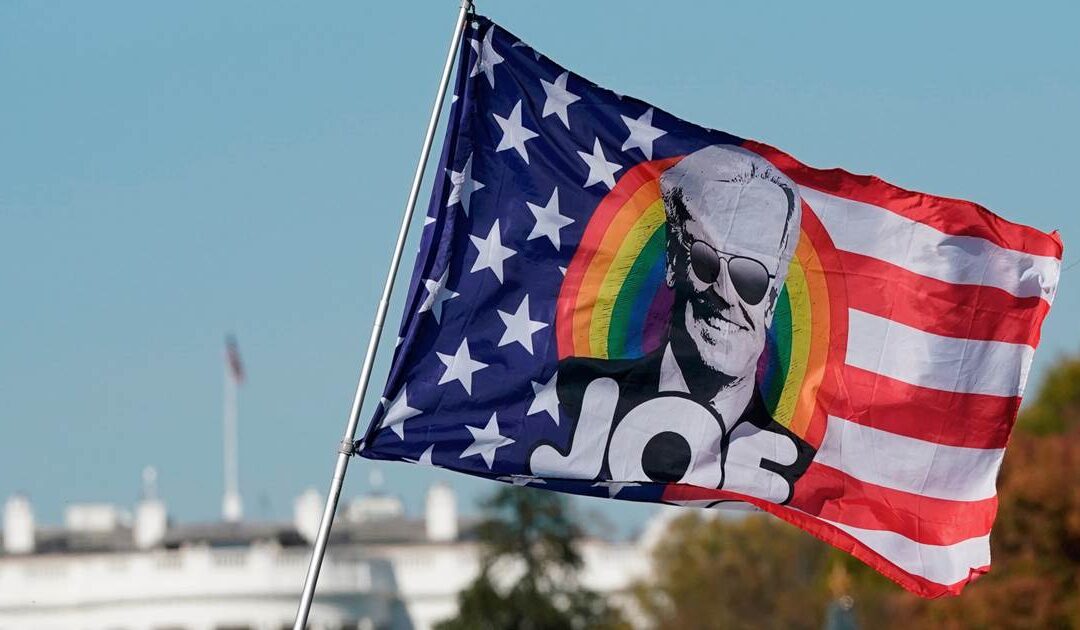 Finn Cooper, who lives in Cincinnati, volunteered for the Michigan Democratic Party to call voters in the swing state on behalf of the Biden-Harris presidential campaign in the months leading up to the election.

“I thought he seemed like a good candidate — much better than Trump, of course, and I do think he has done infinitely better than Donald Trump on these issues,” Cooper, 20, said. “At the administration level, I think he’s done well. The problem I think more comes down to the legislative things and working with Congress. I don’t think enough of that has happened.”

LGBTQ rights activists generally agree that Biden has accomplished many of the things he said he’d do for the community in the first 100 days of his presidency, most of them through executive orders. A new GLAAD poll of 800 lesbian, gay, bisexual, transgender and queer adults found that 78 percent said Biden is doing an excellent or good job as president. But some, like Cooper, expected more from him.

Despite Biden’s executive actions to protect LGBTQ people, Cooper noted that states are still considering a record number of anti-LGBTQ bills, particularly bills that target transgender youth. Cooper said they’d like to see the president work harder to get the Equality Act through the Senate so LGBTQ people actually have far-reaching legislative protections from discrimination.

“All across the country there are so many state legislatures that are passing these awful, awful anti-LGBTQ laws, particularly anti-trans laws, and he’s not really doing a lot,” Cooper said. “Literally they haven’t passed any national laws, but also just like as president, he’s not speaking out.”

“Just because it’s better doesn’t make it good,” they said.

There are many ways the Trump administration’s “nefarious, anti-LGBTQ policy” has been woven into the government, according to Sharon McGowan, chief strategy officer and legal director of Lambda Legal, an LGBTQ legal advocacy organization.

“We know that it is going to take some time to root all of that out,” she said.

McGowan said the Biden administration has shown a “commitment to LGBTQ equality” from day one by quickly moving to reverse the previous administration’s policies targeting LGBTQ Americans. For example, she said, he issued an executive order on the first day of his presidency recognizing the Supreme Court’s landmark 2020 decision in Bostock v. Clayton County, Georgia, which established that LGBTQ people are protected from employment discrimination under Title VII of the Civil Rights Act of 1964.

The executive order also expanded the sex discrimination protection of Title IX of the Education Amendments of 1972 to include gender identity and sexual orientation.

Also in the first days of his presidency, Biden reversed Trump’s ban on transgender people enlisting in the military and rescinded Trump’s executive order barring residents and refugees from several majority-Muslim countries from entering the United States — a move advocates say is important to those fleeing persecution in countries where homosexuality is still illegal.

Biden released an executive order on his first day in office to advance racial equity, and his administration has hired people who understand the “nuances and intersections” of communities of color and LGBTQ people, said Victoria Kirby York, deputy executive director of the National Black Justice Coalition.

“The fact that the equity-based orders that he put out included multiple marginalized identities that intersect in a person was huge, because often people have to pick and choose what part of themselves they think is being discriminated against, and sometimes it’s the coming together of all of it,” she said. “It’s not just because I’m a woman or just because I’m Black, but because I’m a Black woman that I’m experiencing a particular form of discrimination, and that kind of nuance in policymaking only happens when you have diverse representation at the decision-making tables.”

In fact, Biden has appointed a record number of LGBTQ officials to serve in his administration, including White House deputy press secretary Karine Jean-Pierre, deputy communications director Pili Tobar, Secretary of Transportation Pete Buttigieg and the first openly trans federal official to be confirmed by the Senate, Dr. Rachel Levine, the assistant secretary of health.

He has also nominated Shawn Skelly to serve as the assistant secretary of defense for readiness. If confirmed by the Senate, she would be the highest-ranking openly trans Pentagon official, The Washington Post reported.

“The president’s very serious about making his administration look like America,” Mara Keisling, executive director of the National Center for Transgender Equality, said. “He’s way out ahead of where the Obama administration was, and probably most importantly, he’s shown us that he’s serious. He’s shown us that he cares. We now have a president who’s not going to use us for target practice.”

On some issues, advocates are still waiting for Biden to fulfill his promises. One of the most notable was his promise to sign the Equality Act — which would grant LGBTQ people broad protections from discrimination in housing, employment, education, public accommodations, credit and jury service — into law in the first 100 days of his presidency.

Though the House passed the bill in February, it has since stalled in the Senate in part due to the filibuster, which requires 60 members, a supermajority, of the chamber to end debate on a measure to move it to a vote.

During a White House press briefing earlier this month, press secretary Jen Psaki said Biden “continues to work toward” passing the Equality Act, but “in order to sign legislation, it needs to come to his desk.”

He also called for the Senate to pass the bill in his first joint address to Congress on Wednesday.

McGowan said Biden should continue to draw attention to the fact that the Equality Act is popular: Three-quarters of Americans support nondiscrimination protections for LGBTQ people, according to recent data from the Public Religion Research Institute.

“It’s going to continue to be important for President Biden to use his bully pulpit and to use his position of leadership to speak out about LGBT equality as not some issue that only some small group of people care about — but something that is so central to the moral fabric of our country,” McGowan said. “That’s the kind of thing that then creates the pressure that leads to us being able to get to the 60 votes that should very easily be there for something like the Equality Act.”

In addition to the Equality Act, advocates would like Biden to deliver on his campaign promise to support state and federal efforts to give nonbinary people access to an X gender marker on IDs, including passports.

McGowan said Lambda Legal has led a yearslong lawsuit to help nonbinary people have access to an X gender marker on their passports. In May 2020, the 10th U.S. Circuit Court of Appeals overturned a lower court’s decision in favor of Lambda Legal’s client and ordered the State Department to consider their passport application again.

Now that Biden is in office and Lambda Legal’s case is back at the State Department, McGowan said the group is hoping “we will get the answer that we should have gotten the first time.”

Kirby York said she would also like to see the administration take more action to study and prevent anti-trans violence, adding that reports of violence have reached a new record high. The American Medical Association released a statement in 2019 declaring fatal attacks against trans people an epidemic. Last year surpassed 2019’s number, with 44 trans people reported killed, according to the Human Rights Campaign. So far in 2021, at least 17 transgender people have been killed, with more than half of them Black trans women.

“There’s been a naming of the issue by different elected officials, including President Biden and Vice President Kamala Harris, but there’s been, to my knowledge, no specific initiative or task force even designed to address these numbers,” Kirby York said.

Addressing anti-transgender violence was a key campaign issue for Biden. In October, he criticized the Trump administration for its “dehumanizing government actions and rhetoric” that he said fueled “the flames of transphobia” that lead to violence.

In March, he issued a presidential proclamation on Transgender Day of Visibility, saying, “The crisis of violence against transgender women, especially transgender women of color, is a stain on our Nation’s conscience.”

Kirby York hopes that once Biden has filled all the open positions in his administration, he’ll start to directly address the issue.

Some advocates say the rise in anti-trans violence is in part due to state legislative “attacks” on trans people. So far in 2021, at least 144 bills targeting transgender people have been introduced in state legislatures across the country, according to the Human Rights Campaign.

As of Friday, nine anti-LGBTQ bills have been signed into law in 2021, putting the year on track to “become the worst year for state legislative attacks against LGBTQ people in history,” Human Rights Campaign President Alphonso David said during a news conference last week.

Arkansas is also the first state in the country to ban gender-affirming medical care for trans minors, though the bill was opposed by major medical organizations such as the American Medical Association and the American Academy of Pediatrics.

Biden affirmed his commitment to protecting LGBTQ youth in schools through his executive order on Title IX, and he spoke to trans people directly during his Wednesday address to Congress: “To all transgender Americans watching at home — especially the young people who are so brave — I want you to know your president has your back,” Biden said.

But some trans advocates say it’s not enough.

“I’m very thankful for this. But what does having my back mean? Like, if the bills pass in Texas will you keep them from putting my mom in jail?” tweeted Kai Shappley, a 10-year-old transgender girl who testified before the Texas Legislature against a bill that would make it a felony for doctors and parents to provide gender-affirming care such as hormones or puberty blockers to trans minors.

McGowan said she thinks Biden is giving the Department of Justice and Department of Education “breathing room” to figure out how they want to address the state bills, but, she added, “I certainly would never say that the president could not do more.”

She’s hopeful the administration will “kick it into high gear” in the coming months. She said Biden’s choice of civil rights attorney Vanita Gupta as associate attorney general makes her optimistic.

“There’s a lot of work to do and a lot of damage to be undone, and so it has been very gratifying to see people tapped for these positions who have deep knowledge around working in the federal structures to promote civil rights and promote LGBTQ equality,” she said.