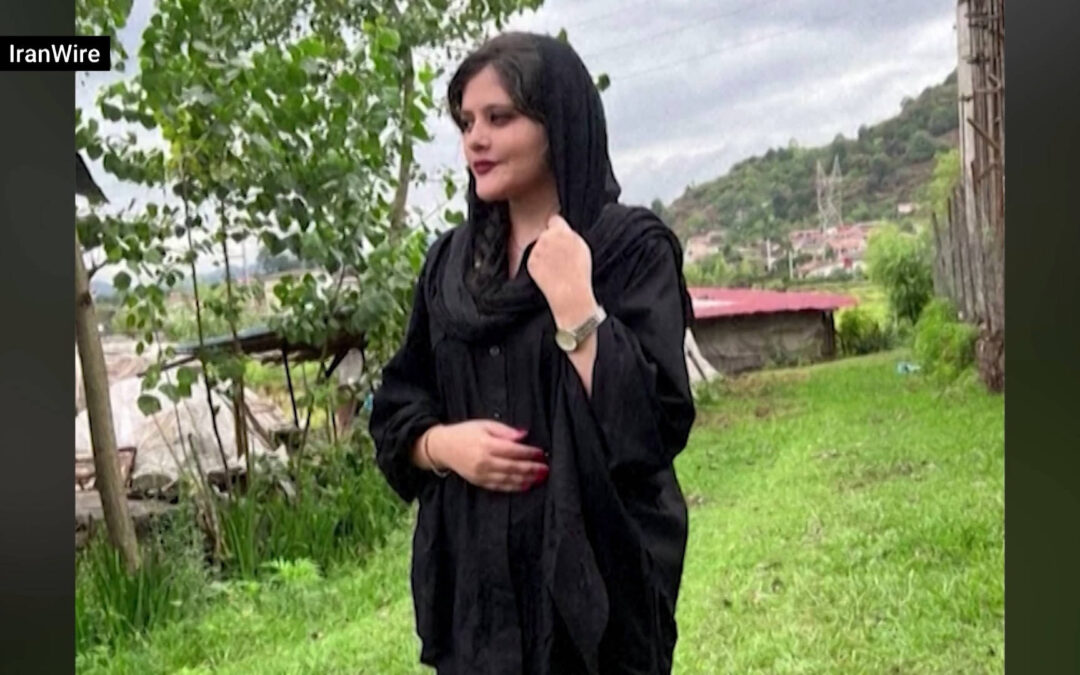 Protests continue to escalate in Iran after a 22-year-old Kurdish woman died in the custody of Iran’s so-called morality police. The woman, Mahsa Amini, died after being detained for allegedly leaving some of her hair visible in violation of an Iranian law requiring women to cover their head. Witnesses said Amini was severely beaten in a police van. She was later hospitalized in a coma, died Friday.

In a bid to quell the protest, internet access has been restricted in parts of Iran, and access to WhatsApp and Instagram have been curbed. At least seven protesters have reportedly been killed. Video posted online show women burning their hijabs.

Joining us now in Washington, D.C., is Negar Mortazavi. She is an Iranian American journalist, political analyst, host of The Iran Podcast.

Welcome back to Democracy Now!, Negar. Talk about the significance, first, of her death, of this young woman’s death, and these mass protests that have erupted across Iran.

NEGAR MORTAZAVI: Well, Amy, we have seen and Iranians have seen image after image, footages, video, hand-held mobile phones capturing the violence of this morality police, or, as they literally call it, the guidance police, which, as they claim, is supposed to be guiding people into how to dress and how to behave Islamically. But it’s turned into an actual force of harassment against women, and some men, on the streets in Tehran, trying to arrest women, violently throwing them into police vans, beating them while arresting them. So, this anger against the morality police and the violence that they’re committing on the streets has been building up for years, and with the evidence that people have seen with their own eyes.

And then the death of this young woman, or, essentially, as people see it, the killing of her while she was in custody of the morality police — she was arrested, thrown in a van, taken to the detention center, where she was supposed to, quote-unquote, “go through a training” to be guided as to how to dress, and then, eventually, she ended up in the hospital, and her body was given to her family.

The anger has been building up for years among women and also men who — many women see herself in Mahsa Amini; many men see their own sister, their own daughter — essentially saying, “This could be any of us. And his could happen to any of us in the hands of the morality police.” So, the anger is just endless. It’s been building up, and now it’s just pouring into the streets of many cities across Iran.

NERMEEN SHAIKH: And, Negar, as you mentioned, there are unbelievable images coming out of Iran. Many protests are being led by women, women burning their hijab, women cutting off their hair in front of hundreds, if not thousands, of people, who are cheering. I mean, can you talk about this unprecedented act of defiance and where you think this might lead?

NEGAR MORTAZAVI: Definitely. So, women have been pushing back and resisting against the morality police individually or in smaller groups on a case-by-case situation whenever they were encountering the morality police. But this time it seems like a collective pushback coming to the street, and these iconic images, as you said, basically saying that enough is enough and that they’re fed up with this mandatory dress code that’s being forced on them.

We see images of women throwing their scarves in the fire, which in the past you would see women take off their scarves, and then, when the police was around, they would put it back on. When you throw it in the fire, the scarf is gone. It can’t be retrieved. So it’s an “enough is enough” show of defiance. Also, cutting the hair is a sign of grieving, is a sign of anger, so grieving for Mahsa Amini, showing that they want to take control of their own bodies, their own dignity, their rights.

And it’s just incredible, the bravery of the young generation. These are women in their twenties. University students in major universities in Iran are also protesting. And they’re really risking their lives, because we also see very violent crackdown and security forces shooting at protesters. And so, those who are on the street are really putting their lives on the line to try and demand their rights and equality.

NERMEEN SHAIKH: Negar, there’s also a very strong class dimension to the way in which Mahsa Amini was targeted. Could you talk about the importance of the region she was from, the Kurdish region of Iran — she was simply visiting Tehran; she does not live there — and her origins in this relatively poor, disenfranchised and rural area?

NEGAR MORTAZAVI: Sure. So, Mahsa Amini is from, as you said, the Kurdish area in the western border of Iran. It’s an area where the Kurdish minority lives. And there’s been so much tension and, essentially, pressure and repression on this minority community from the central government. And tensions are always high in that region.

Her being Kurdish wasn’t necessarily the reason she was picked on. The morality police picks on all kinds of women, from all walks of life. But when the protests broke out, the funeral of her family — the kind of pressure that her family is being subjected to, being from that minority area, has become even more severe. The protests in that area for her killing have become violent, meaning the crackdown in that area has become violent, and the state is trying to repress any form of dissent in that specific area. But as far as the morality police, and especially people who live in Tehran, they’re saying, essentially, she was visiting our city, she was a guest in our city, in the capital, and this is how she was treated by the forces, by the police forces. And, essentially, her body was given to her family.

AMY GOODMAN: Negar, the Iranian president addressed the U.N. General Assembly yesterday. Your response to what he said? And what number do you have of the number of protesters who have been killed or beaten so far in Iran?

NEGAR MORTAZAVI: Well, the Iranian president spoke a lot about inequality and justice and the rights violations by other countries, with a lot of emphasis on the U.S. and how the U.S. has wronged Iran, but there wasn’t much address of what’s actually going on inside Iran. No mention of Mahsa Amini, really, or the ordeal that her family is going through. There was another leader — I believe the Chilean president — who actually mentioned Mahsa Amini’s name, and a few others who talked about women’s rights and their fight for dignity in Iran.

So, the internal or the domestic situation or the protest wasn’t really addressed, although the president has announced that he has a team investigating the reason or what led to Mahsa Amini’s death. Again, the population is very skeptical of these investigations that have been done by the state in the past, not putting a lot of trust into what will come out of it. But, overall, it just seems like they want to ignore the international attention that’s being given to what’s happening inside Iran, while the protesters and the people on the ground are actually asking for global solidarity, for international support to help them raise their cause into a global stage.

NERMEEN SHAIKH: Negar, could you talk also about the fact — another striking feature of these protests is that they’re not just, you know, concentrated either in the region that Mahsa Amini was from, the Kurdish region, or Tehran, but also there have been massive protests in cities that have a religious significance for the Shia majority, Mashhad and Qom. Could you talk about the significance of that?

NEGAR MORTAZAVI: Sure. So, the protests have spread to large and small cities, as you said — I think at this point two dozen cities and small towns across the country — because this is the reality of the everyday life of any Iranian woman. There have been numerous stories, many, many stories, of religious women, women who observe the hijab in the private of their home, going outside and being stopped by the morality police because the supposed agent didn’t deem what they were wearing Islamic enough at that moment.

It’s also very subjective. It’s not very clear who they stop, why they stop, what is appropriate, what is not appropriate. Certain people with more resources — if they’re in their own car, if they’re in their houses in certain neighborhoods — seem to be getting away from this harassment. And women who are present in the public space in the cities — they take the Metro like Mahsa did, they take the bus, they go to work — seem to be subjected to more harassment by the morality police.

So, it’s spread to — as you also said, Nermeen, to religious cities, like Mashhad, like Qom, the religious center of Iran, because this is the reality of every woman who’s living in any part of Iran, and they’re angry about it. And again, they see — they feel solidarity because they see themselves in Mahsa, I mean, this young woman, 22-year-old, not even from Tehran, visiting a large city, and this happening to her.

NERMEEN SHAIKH: And, Negar, finally, we just have a minute. Could you talk about the extent to which the protests are also about the economic situation in Iran — 50% inflation, the currency at an all-time low — and how that’s tied to the continuing U.S. sanctions, maximum-pressure sanctions against Iran?

NEGAR MORTAZAVI: Well, Nermeen, these protests are not centered on the economy, but that’s the underlying grievance that’s been building up over the years. The economic situation, political repression, social, cultural, pressure on artists, on filmmakers, on political activists, on journalists, it’s been building up, and it’s not been addressed by the state. And also, with a stalemate with the nuclear deal, there doesn’t seem to be any prospect for sanctions relief for the country, which could give some economic benefit to Iran.

So, this situation seems to be continuing in the last few years, and it’s just building up the grievance and the anger in the population, especially the young population, doesn’t seem a prospect, a future for themselves, a lot of opportunities. And then they also feel like their dignity and their basic right has been violated by the state so violently, to the point of this woman’s death. So they’re on the streets centered on these very rights and dignity-centered issues, but the underlying grievances are also economic, political, social and even cultural.

AMY GOODMAN: Negar Mortazavi, we want to thank you so much for being with us, Iranian American journalist, political analyst, host of The Iran Podcast.