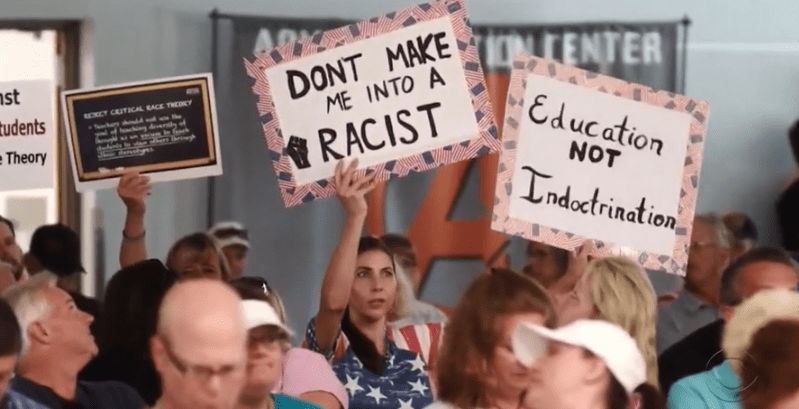 How far will white parents go to fight against educators teaching race and racism in America—or as people of color and anyone with a shred of common sense calls it, American history?

A Facebook ad paid for by (this is not a joke) the Most Racist Colleges and Universities group—one which claims they work to “stop university support for terrorists”—lashes out at a Black Stanford University professor, Hakeem Jefferson, for “promoting his view in a series of social media posts that ‘Whiteness’ is largely responsible for opposition to school mask mandates.”

Jefferson, a Stanford assistant professor of political science, is being called a “racist” in the ad, and threatened and harassed by the group, its followers, and other users who encounter the ad. And Facebook, true to form, is doing nothing to stop it.

Jefferson is meeting with his dean Friday and says the meeting was scheduled months ago—after he was harassed last time.

Making it to sponsored ads on Facebook. Does this mean I’ve officially made it? pic.twitter.com/nAyYa372fU

As Bree Newsom Bass—activist, filmmaker, and heroine who bravely removed the Confederate flag from the South Carolina statehouse in the aftermath of the Charleston church shooting in 2015—wisely tweeted in response to the outrage of white parents about CRT:

This liberal framing that “white people have been duped into thinking CRT is taught at schools” is a convenient way of not addressing an active fascist campaign to expel Black educators, texts and histories from classrooms.

Groups such as Moms for Liberty, a group started in that bastion of caucasity, Florida, has grown to 60,000 nationwide, according to CBS News. The group’s mission is “dedicated to fighting for the survival of America by unifying, educating, and empowering parents to defend their parental rights at all levels of government.”

What they’re really doing is showing up at school board meetings with the false pretense of fighting against critical race theory (CRT), which isn’t even taught in K-12 schools. And the end result? A Republican governor in Virginia in Glenn Youngkin, and a disturbing wave of book banning.

“Grade two, module three, has five or six books. One of them is Martin Luther King and the March on Washington, which of course that should be taught. But how should it be taught? What should we focus on when we teach it?” Robin Steenman, founder of Moms for Liberty asks CBS.

“There’s one specific example in this book … there’s a very famous photograph of firemen spraying children that were engaged in a protest in, I believe it was Birmingham. It’s a terrible photo, they’re doing harm to children, Black children, they’re blasted by fire hoses. And it shows that to these second-grade children,” Steenman continues. “Most kids up to that point have idolized the policemen, the firemen.”

“I don’t want them to see racism yet—to engage, to learn racism. They can teach history, but let’s not teach racism,” Steenman said.

Let’s unpack Steenman’s statement: “They can teach history, but let’s not teach racism.”

It’s so easy for white people to dismiss teaching racism, but the lessons for children of color come fast and young. Do they get a choice about when they can learn about racism?

Daily Beast reports that Manning, founder of the “Wokeness Checker” website, along with co-board member Laura Hughes, sent an email to Virginia Beach City Public Schools Superintendent Aaron Spence to demand that four books be removed from circulation or used in the classroom “due to their pornographic nature.”

“It has been brought to my attention by some parents that there are some disturbing books in our district that are available to students,” Manning wrote on Oct. 5. “I would like to ask that you pull these books from shelves and also block any electronic access by students to getting these books IMMEDIATELY.”

First on Manning’s list is author and Nobel Laureate in Literature Toni Morrison’s debut novel, The Bluest Eye, alongside Jonathan Evison’s Lawn Boy, A Lesson Before Dying by Ernest Gaines, and the memoir comic Gender Queer by Maia Kobabe.

Manning has not even read The Bluest Eye—“just reading a few of the pages gives me utter disgust,” she said according to The Virginia-Pilot.

Sharon Roberson, president and CEO of the YWCA of Nashville and Middle Tennessee, wrote a letter on behalf of the Tennessee Department of Education, decrying a law put into place in July in Tennessee, banning CRT and teaching any “lessons that suggest anyone, based on their race or sex, is ‘inherently privileged, racist, sexist, or oppressive, whether consciously or subconsciously,’” as well as any curriculum that makes people feel ‘discomfort, guilt, anguish, or distress solely because of the individual’s race or sex.’”

Robertson understands a key principle in education: If we don’t teach our history, we are destined to repeat it.

“I was actually born in Germany, from a military family, and very proud of that. In Germany, they teach about Hitler because they want people to understand this was a very difficult aspect, a horrible part of their history, but you need to understand that because if you love your country you want your country to be the best that it could be, so they teach those things. Some people don’t like it, but it doesn’t make Germans not like Germany, It makes them proud that their country has overcome that and become the country it is today,” Robertson tells CBS News.