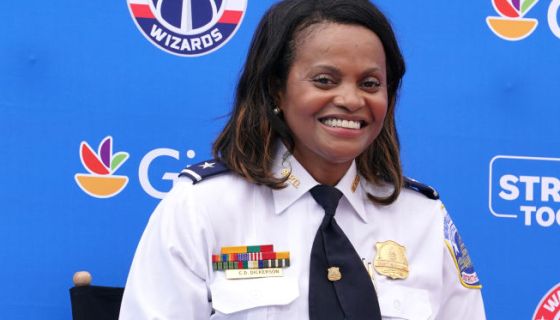 Women everywhere have been fighting decade after decade to stop people (i.e. men) from policing their bodies, and even the actual policewoman themselves are having a hard time with the issue.

Chanel Dickerson, assistant police chief in Washington, D.C., came forth with a jaw-dropping claim of her own that as an 18-year-old cadet she was told by MPD to either have an abortion or be fired from the program.

Now in her early 50s, Dickerson explained the situation in a community meeting recently by stating, “My choice to have a baby was personal, and it should’ve been mine alone and not for an employer ultimatum.” Her statement stems from a class action lawsuit detailing race and sex-based discrimination that she filed along with other Black women that’ve retired from or are currently serving under the Metropolitan Police Department which we reported on last month.

Here’s more on Dickerson’s overall stance on mistreatment as a women by MPD, via NBC News:

“‘I understand the dire consequences to me participating in this lawsuit,’ Dickerson said at the time, adding she has been subjected to repeated sexual harassment in her tenure as an officer.

Another lawsuit was filed this week by three Black women, all former cadets, alleging abuse and retaliation.

The women in the initial lawsuit allege that they had each complained to superiors and the equal opportunity department multiple times about unfair treatment on the basis of their race and gender but were ignored.

When they reported the discrimination claims, they faced retaliation and in some cases were forced out, they said in the lawsuit.”

The lawsuit filed amongst the nine women is set at $100 million. Given the fact that Dickerson has been on the force for the past 30+ years and shared that she never became a mother, we just hope that justice is served for all that she endured and had to give up.

HEAD TO THE BLACKAMERICAWEB.COM HOMEPAGE

← Police searching for a black Lexus SUV following fatal North York shooting | The Star ← 1867: The Myth Of The Happy Musical Slaves by The Black Guy Who Tips Podcast