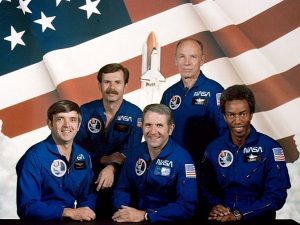 On 30 August 1983, Dr. Guion Stewart Bluford Jr. became the first African American in space, as a member of the crew of the space shuttle Challenger. An aerospace engineer, an officer in the U.S. Air Force, and a former fighter pilot during the Vietnam War, Bluford ended up flying on four space shuttle flights – perhaps none as important as his historic first one.

Bluford’s historic first flight into space was a great success – but it almost was a disaster. The 1983 mission he flew on, STS-8 from 30 August to 5 September, was the eighth NASA Space Shuttle mission and the third flight of the Challenger. In addition to carrying the first African American into space, STS-8 was the first Space Shuttle night launch, and six days later became the first night landing. It successfully released a satellite from India into orbit, and conducted several scientific experiments.

Just hours before its launch, however, the Challenger was almost struck by lightning from a severe thunderstorm.

As if the near-lightning strike wasn’t hazard enough, NASA discovered, after Challenger returned, that the launch had almost been a catastrophe: a solid-fuel rocket booster had nearly malfunctioned, which would have created a huge explosion.

Fortunately, the two near-disasters did not harm or stop the mission, and STS-8 returned safely on 5 September having successfully accomplished its satellite launch and its round of experiments.

On top of that, history had been made: the first African American in space. The nation’s newspapers were quick to note Bluford’s achievement, as in this example.

Here is a transcription of this article:

Blacks Are Proud of Bluford and Hope He’ll Be Example

Proud black leaders found inspiration for themselves and their children in today’s flight of the first American black in space, but some were distressed that it took more than 20 years to happen.

Guion Bluford, a 40-year-old Air Force pilot with a Ph.D. in aerospace engineering, became the first U.S. black in space with the liftoff of Challenger. The honor of being the first black in space belongs to a Cuban [Arnaldo Tamayo Méndez] who was sent up a few years ago by the Soviets.

The Rev. Joseph Lowery, head of the Southern Christian Leadership Conference, said Bluford’s flight would spur interest among blacks in the engineering fields, but not necessarily in the military.

“It should encourage young blacks who have scientific interests to pursue them,” he said.

Bluford is a Philadelphia native, a Pennsylvania State University graduate, father of two children and a veteran of 144 combat missions during the Vietnam War. He joined NASA in 1978.

But she worried technical knowledge gained in the space program might be used “for more military buildup.”

Atlanta Mayor Andrew Young said: “If it helps black youth to study their math, it will be worth it.”

Bluford himself is shy about the landmark.

“I see it as an historical event in the sense that I’m opening the doors for the other people behind me,” he said in a recent interview. “I recognize the importance of that, but I also recognize I’ll be one of the many others who will be flying in space.”

Walter Fauntroy, the District of Columbia’s delegate to Congress, said, “It’s an inspiration to black young people. It is another vista that opens up to them if they apply themselves.”

He said the flight of a black American in space is long overdue, but added, “We welcome it.”

The Rev. George Clements, a Catholic priest, said since so many black youngsters live in single-parent homes, Bluford’s flight “will have an extremely positive effect” because black “father-figures are extremely important.”

But the 51-year-old Clements added, “I think that virtually everything that happens to black people happens late.”

Note: An online collection of newspapers, such as GenealogyBank’s Historical Newspaper Archives, is not only a great way to learn about the lives of your ancestors – the old newspaper articles also help you understand American history and the times your ancestors lived in, and the news they talked about and read in their local papers. The same is true of more recent news.