Ottobah Cugoano: A Man Radical For His Time 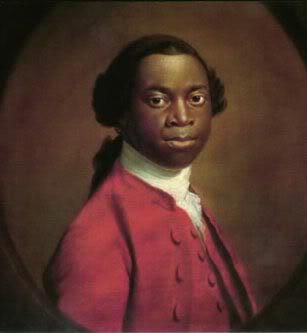 In 1757, Quobna Ottobah Cugoano, also known as Ottobah Cugoano, was born on what was once known as the Gold Coast, which is now modern day Ghana. When he was only thirteen, Ottobah was kidnapped outside his village and sold to Europeans, thus becoming another victim of the transatlantic slave trade. On a slave ship sailing through the Middle Passage, Ottobah’s written account, Thoughts and Sentiments on the Evil and Wicked Traffic of the Slavery and Commerce of the Human Species, Humbly Submitted to the Inhabitants of Great-Britain, details how the Africans aboard tried desperately to sink the ship. Death was preferable to their uncertain futures in the West Indies. Their attempt had been unsuccessful.

Ottobah was sold in Grenada. For nearly two years, he worked in a slave gang on various plantations and passed through the hands of several owners. In 1772, he was taken to London by his current slave owner, Alexander Campbell.” On August 20th, 1773, Ottobah was baptized and renamed John Stuart. Ottabah’s account says his conversion was rooted in an attempt to not be sold again, but he did develop a deep-rooted spirituality in Christianity later in life. It’s unknown how Ottobah gained his freedom, but the year he arrived in London, a landmark decision regarding slavery had been reached in the British courts. The Lord Chief Justice, Lord Mansfield, also the uncle of Dido Elizabeth Belle, reached a ruling in the Somerset v Stewart case, providing enslaved Africans in England with some legal protections regarding forcible removal from the country. However, this ruling didn’t make the slave trade illegal or extend beyond England.

Once free, Ottobah dedicated himself to reading, writing, and studying. In 1784, he was recorded as being employed by artists Richard and Maria Cosway as a servant. His connection to the Cosways introduced him to poets, politicians, and political figures, like William Blake and the Prince of Wales. He was also active in the Sons of Africa, an abolitionist group that was composed of Olaudah Equiano and other prominent, educated Africans living in England.

In 1786, he was a leading figure in the fight to keep Henry Demane, a kidnapped black man, from being forcibly removed from England and sold in the West Indies. Ottobah’s efforts, and the efforts of other abolitionists, helped free Demane from the slave ship before it left port. In the following year, he published his book, Thoughts and Sentiments on the Evil and Wicked Traffic of the Slavery and Commerce of the Human Species, Humbly Submitted to the Inhabitants of Great-Britain, an autobiography detailing the horrors of slavery and the transatlantic slave trade while applying philosophical, religious and economic arguments to call for its banishment from all corners of the British Empire. Ottobah’s account was one of the first black abolitionist books written in England, and it was the most radical, possibly the most progressive, of its time. For example, he called for punishing slave owners with enslavement by their former slaves.

Title page of Thoughts And Sentiments On The Evil & Wicked Traffic Of The Slavery & Commerce Of The Human Species, 1787. (Credit: Wikimedia Commons, Public Domain)

Ottobah published another book in 1791, addressing the “Sons of Africa.” In it, he supported England’s failure at establishing a colony in Sierra Leone for London’s poorer blacks, which included African Americans who moved to London after the American Revolutionary War. He also demanded schools for Africans established throughout England. Unfortunately, Ottobah falls from the historical record after this book’s publication. It’s not certain if he died shortly after or years later.

Ottobah was one of the most radical and forward-thinking black abolitionists of his day. He was fearless in his fight to end slavery (where some of his contemporaries only called for the end of the transatlantic slave trade, not the entire institution of slavery). He criticized Wilbur Wilberforce, calling him a hypocrite when he didn’t support ending slavery throughout the British Empire. He studied hard to put his experiences with slavery into writing and to circulate his ideas to promote the rights and lives of Africans. Ottobah was a man ahead of his times.

About Equiano by The Equiano Society

Creating a Paradox: Quobna Ottobah Cugoano and the Slave Trade’s Violation of the Principles of Christianity, Reason, and Property Ownership by Jeffrey Gunn

The Unsung Heroes of Abolition by Adam Hochschild