For over 2000 years the core principle that doctors should help patients and do no harm has been the foundation of Western medicine. Yet medical practice in the United States as we know it may not have been possible without the harmful and unwilling participation of enslaved African Americans. This essay will explore the gruesome history of medical experimentation on Black slaves and how it shaped American medicine.

The practice of medical experimentation on enslaved Africans was not only common. It was critical to the development of modern medical practice. While ethical treatment of patients is the normal standard of care expected in medicine, African Americans have historically found themselves an exception to that norm. Treating Black people as an abundant subhuman supply of disposable labor and bodies, enslavers routinely abandoned the code of medical ethics reserved for whites. As such, they treated their human chattel as experimental subjects with no regard for consent.

Before the Civil War, approximately four million Black people were held in slavery in the American South. The abundant slave population facilitated the notion that enslaved Blacks were expendable. Enslaved Black people lacked fundamental human rights and the liberty of bodily autonomy. Stripping them of their humanity was a method of controlling the slave population that allowed for unimaginable brutality. On the other hand, compliance was a survival tactic that many enslaved Black people adopted to lessen the brutality they experienced at the hands of their enslavers as much as possible.

“Five hundred thousand strokes for freedom ; a series of anti-slavery tracts, of which half a million are now first issued by the friends of the Negro.” by Armistead, Wilson, 1819?-1868 and “Picture of slavery in the United States of America. ” by Bourne, George, 1780-1845, Public domain, via Wikimedia Commons

In the late eighteenth century, the establishment of American medicine created a demand for human subjects to enhance medical understanding. Although non-consensual, their enslavement often forced African Americans to satisfy that role. “Those who were enslaved were a vulnerable population that doctors used because of easy accessibility to their bodies.” (Deirdre Cooper Owens, 41) Societal norms held no qualms over the use of Black bodies out of convenience.

Blacks were considered more available and accessible in this white-dominated society; they were rendered physically visible by their skin color but were legally invisible because of their slave status (Savit, 332).

The Dehumanization of Enslaved Black People

The very dehumanization that condoned the institution of slavery had dangerous effects on enslaved African Americans. It condoned their ill-treatment, abuse, and living conditions that would never be deemed acceptable for even the lowliest whites. Even in death, enslaved Black people were disposable, and their bodies were made accessible. 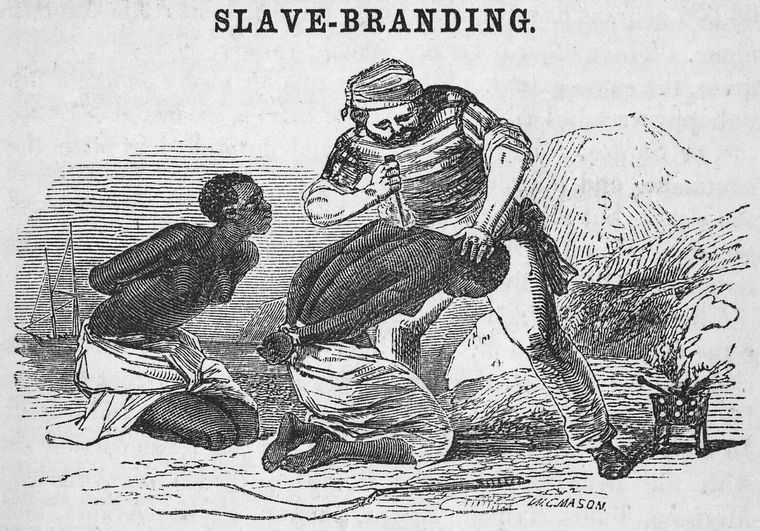 “Five hundred thousand strokes for freedom ; a series of anti-slavery tracts, of which half a million are now first issued by the friends of the Negro.” by Armistead, Wilson, 1819?-1868 and “Picture of slavery in the United States of America. ” by Bourne, George, 1780-1845, Public domain, via Wikimedia Commons

It is to be expected in a slave society that the subjugated will be exploited. Such was the case in the American South, where blacks acted not only as servants and laborers but also as medical specimens. Some medical scientists living in that society took advantage of the slaves’ helplessness to utilize them in demonstrations, autopsies, dissections, and experiments, situations distasteful to whites and rejected by them. (Savit, 347).

As a result, the use of enslaved Black people in medical experimentation was prominent from the infancy of American medicine.

Before establishing the first medical school in the United States in 1765, medical practitioners traveled to other countries to receive formal education. Slavery in the American South flourished in the 1830s alongside the establishment of medical schools there. Medical schools fueled the need for human bodies for teaching and testing. Historian Stephen Kenny has documented how slave bodies were exploited in these institutions for dissections, anatomy classes, and clinical experimentations. (Schiebinger, 88).

Stripping them of their humanity also allowed promulgation of the idea that African Americans did not experience pain to the extent of their white counterparts. By 1809, Dr. Ephraim McDowell, known as the “Father of the Ovariotomy,” developed a method for removing ovarian tumors after acquiring and experimenting on enslaved Black women. One observer wrote,

All of the women operated upon in Kentucky, except one, were negresses…and they will bear cutting with nearly, if not quite, as much impunity as dogs and rabbits…our wonder was lessened since physicians understood that black women’s propensity to handle pain was effortless (Deirdre Cooper Owens, 31).

Often bearing the brunt of both physical and sexual exploitation, many enslaved Black women endured forced medical procedures against their will.

The enslaved women were not asked if they would agree to such an operation as they were totally without any claims to decision-making about their bodies or any other aspect of their lives (Ojanuga, 29).

Enslavers not only forcefully subjected enslaved Black women to endure painful medical procedures, but their lack of bodily autonomy in some cases subjected them to sexual exploitation. Dr. John Peter Mettauer performed one of the country’s first successful vesicovaginal fistula operations in 1840. Often a result of complications after vaginal or bladder surgery, a vesicovaginal fistula is an opening that forms between the bladder and the wall of the vagina. Mettauer developed his method after performing experimental surgeries on a twenty-year-old bondwoman to repair her fistula. After repeated failures, Mettauer went so far as to blame the enslaved woman’s sexual activity for the persistence of her condition even though,

Mettauer’s slave patient had little or no agency to refuse men who wanted to engage in a sexual relationship with her, just as she could not end her participation in a gynecological clinical trial that proved ineffective for years (Deirdre Cooper Owens, 34).

Conclusion: Do No Harm

While ideally, practitioners use medicine to ease pain and suffering, in the case of enslaved Black people, it can also be the root cause of suffering. That is true because enslavers regarded African Americans as subhuman property. Ultimately, the use of Black slaves in medical experimentation was an appealing direction for the American medical establishment due to its little regard for Black lives in combination with an abundance of disposable enslaved Black people. Those enslaved Blacks who endured exploitation as medical subjects are the silent contributors who go unrecognized for the medical advancements resulting from their non-consensual experimentation. The cruel medical experiments enslaved Blacks experienced lie in stark contrast to the core pillars of medical ethics, which require respect for autonomy and the obligation to do no harm.