Life on the Slave Plantations of the Deep South

Life on the Slave Plantations of the Deep South

A Brief Overview Of Slavery In Context

Between 1790 and 1860, the slave population of the United States grew from nearly 700,000 to about 4 million. There were a variety of settings, each of which created a different set of cultural survival strategies. That’s the reason why Black culture manifests differently on the slave platnations  of Mobile, Alabama as opposed to say, Charleston, South Carolina.

There’s a common misconception that by the time of the Civil War, slavery was a dying institution. As far back as recordkeeping goes, though, the slave population climbed steadily from the 1600s through 1860 and at no point was the 10-year growth rate less than 20%. (Hacker 2020)

There was, however, a decline in slave owners. As I noted in my book, Between The Color Lines: The History of African Americans on the California Frontier Through 1890, “From 1830 to 1860, the percentage of Southern whites who owned slaves dropped dramatically from 36% to 4.7%. Even when adding the members of the registered slaveholder’s immediate family, fully three-fourths of the southern White population neither owned slaves nor claimed any significant share of the windfall profits generated by the institution of slavery. Out of less than 5 percent of southern Whites who owned slaves, only 12 percent owned more than 20 and just 1 percent owned more than 50 slaves. Yet more than half the slaves belonged to slaveowners with 20 or more slaves. So, although the typical slaveholder owned few slaves, the typical slave lived on a sizable plantation. (Spearman 75)

Cotton was by far the most important staple crop in the South and the country as a whole. By 1860 cotton exports amounted to more than 50 percent the dollar value of all U.S. exports (Hine 130). So, although there are other settings that I’ll focus on in a later video, the cotton industry and the culture of slave resistance that rose from it is going to be the focus of this video.

Solomon Northup’s Account of Daily Life on a Slave Plantation

One of the best first hand accounts of life in the cotton Kingdom is the memoir of Solomon Northup published in 1853. In it, he describes the horrific experience of a typical day in the life of a slave on a Louisiana cotton plantation. Kidnapped and sold into slavery in 1841, Northup was held in slavery for 12 years in the Red River region of Louisiana. Northup’s memoir gives an eye-witness account of the brutality that accompanied everyday life on the southern plantations. He writes…

In the latter part of August begins the cotton picking season. … The hands are required to be in the cotton field as soon as it is light in the morning, and, with the exception of ten or fifteen minutes, …at noon …they are not permitted to be a moment idle until it is too dark to see, and when the moon is full, they often times labor till the middle of the night. …

An ordinary day’s work is two hundred pounds. … The day’s work over in the field…the cotton is weighed. No matter how fatigued and weary he may be—no matter how much he longs for sleep and rest—a slave never approaches the gin-house…but with fear. If it falls short in weight… he knows that he must suffer. And if he has exceeded it by ten or twenty pounds, in all probability his master will measure the next day’s task accordingly. So, whether he has too little or too much, his approach to the gin-house is always with fear and trembling. …After weighing, follow the whippings…

This done, the labor of the day is not yet ended, by any means. Each one must then attend to his respective chores. … Finally, at a late hour, they reach the quarters, sleepy and overcome with the long day’s toil. Then a fire must be kindled in the cabin, …and supper, and dinner for the next day in the field, prepared. The same fear of punishment with which they approach the gin-house, possesses them again on lying down to get a snatch of rest. It is the fear of oversleeping in the morning. Such an offence would certainly be attended with not less than twenty lashes. …

An hour before day light the horn is blown. Then the slaves arouse, prepare their breakfast… and hurry to the field again. …Then the fears and labors of another day begin; and until its close there is no such thing as rest. He fears he will be caught lagging through the day; he fears to approach the gin-house with his basket-load of cotton at night; he fears, when he lies down, that he will oversleep himself in the morning. Such is a true, faithful, unexaggerated picture and description of the slave’s daily life, during the time of cotton-picking, on the shores of Bayou Boeuf.

Survival Strategies on the Slave Plantation

Enslaved Blacks had to acquire the skills needed to protect themselves and their loved ones from a brutal slave system.

As mentioned earlier, in the decades before the Civil war, slavery was becoming increasingly monopolistic. Since the closing of the international slave trade in 1808, many small scale slave owners (the nearly 90% of those who owned less than 20 slaves), found it more profitable to sell individuals “down the river” to feed the growing demand for slave labor on the plantations.  As a result of the domestic slave trade, between 1830 and 1860, and estimated 50% of the slaves from the upper South were trafficked to the plantations of the Deep South. In the upper South, enslaved black brothers, sisters, husbands, and wives lived with the constant fear of separation from their families. (Spearman 73-75)

As a cultural adaptation, Black families relied heavily on extended family and even fictive kin as a hedge against the family disruption that the domestic slave trade inflicted.

Parents and older relatives taught slave children how to avoid punishment while still resisting masters and overseers. Folk tales often derived from Africa, told lessons imparted by animal tricksters. Most famously, a series of tales tell the story of how Br’er Rabbit outsmarts his brethren, Bre’r Fox and Bre’r Bear. The stories taught slave children critical life lessons on the value of avoiding trouble by using using their wits and remaining calm to cleverly escape punishment.

They learned to watch what they said to white people, not to talk back, to withhold information about other Blacks, and to dissemble. In particular, they refrained from making antislavery statements and camouflaged their awareness of how masters exploited them. (Hine 141)

Many slave owners during the nineteenth century sponsored plantation churches for slaves, but enslaved Blacks preferred a semisecret church they conducted themselves under the leadership of self-called, often illiterate black preachers. They emphasized Moses and deliverance from bondage rather than the theology of Christian meekness. (Hine 141) 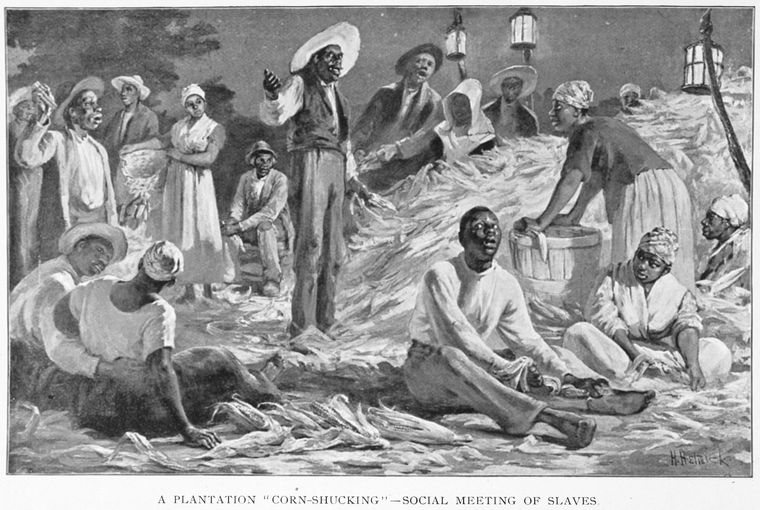 Under the guise of religion, enslaved blacks not only learned to communicate through coded language, but in their spirituals, they developed strategies to slow the work pace so that it was just fast enough to avoid the lash and no faster.

As we’ve seen, by the eve of the Civil War, slavery was far from a dying institution. On the contrary, the population of enslaved Blacks increased steadily even as the number of slaveowners decreased. Slavery  was trending more heavily toward a monopolistic plantation-based institution with cotton as its mainstay. It was maintained by brute force and terror, but it also forged a culture of resiliency and inginuity.

Spearman, A. Darius. Between The Color Lines: A History of African Americans on the California Frontier Through 1890. KENDALL HUNT, 2019.