Martin Luther King Sr. and the Making of a Movement

The Shaping of Michael Luther King

Martin Luther King Sr. was born in Stockbridge, Georgia, on December 19, 1897. Born into poverty, he grew up as Michael King – a sharecropper’s son and the second of ten children. Born in an age of Jim Crow, economic exploitation, and racial violence, his generation would raise the children of the 1960s who fought for racial equality. As such, the parents of the Civil Rights generation will go down as the unsung heroes of the Civil Rights Movement. The man who would later be known as Martin Luther King, Sr. took part in fortifying the Black church and other community institutions. In so doing, he helped build a base within the Black community and his own family to shape the Civil Rights leaders of the next generation.

Growing up in the rural South, Michael King bore witness to lynchings and the wholesale exploitation of Black people. As a sharecropper, he observed on one occasion as the boss cheated his father out of their hard-earned money. Upon pointing this out to his father in the presence of the plantation owner, the boss furiously shouted, “Jim, if you don’t keep this nigger boy of yours in his place, I am going to slap him down.” In an era when the Southern Black community depended on white plantation owners for economic security, his father urged him to keep quiet. (Stanford University 2019).

At home, Michael King witnessed the pain of his father’s alcohol addiction and domestic abuse. To ease the pain and harshness of Southern life, Michael’s mother took him to church.

Michael grew to respect the few black preachers who were willing to speak out against racial injustices, despite the risk of violent white retaliation. He gradually developed an interest in preaching, initially practicing eulogies on the family’s chickens. By the end of 1917, he had decided to become a minister. (Stanford University 2019).

King became interested in preaching after watching his mother. Having practiced eulogy on the family’s chickens, his deep spirituality led him to become a clergyman as he grew older. At his local church, he built a fantastic reputation among his community, which helped him climb the ranks within the church until he became a pastor.

As a civil rights leader, King protested against racial discrimination. He served on the boards of Atlanta University, Morehouse College, the National Baptist Convention, and Ebenezer AME Church. Outside the church, Michael King became an influential civic leader and civil rights activist in the African American Community. As leader of the Atlanta branch of the NAACP, he furthered his involvement in the early stages of social reform. He also led a campaign to raise teacher salaries, resulting in significant gains for African American teachers. (Stanford University 2019)

While still in the Atlanta area, Michael Luther King met his future wife, Alberta Christine Williams, and became close friends with her father, Adam Daniel Williams.A. D. Williams was the senior pastor at Ebenezer Baptist Church. In March 1924, the couple announced their engagement at Sunday services. Meanwhile, King served as pastor at many churches in nearby College Park while studying at Bryant Preparatory School. At the urging of Alberta Williams and her father, Michael King sought admission to Morehouse College. King found the work challenging, but with the support of his classmates, he graduated from Morehouse College withhonors.

Michael King Sr. served as Assistant Pastor at Ebenezer Baptist Church until he became Senior Pastor in 1931 upon the death of A. D. Williams. Inspired by his late father-in-law’s message of equality and racial justice, he became a Civil Rights leader and model for the civil rights workers of the next generation.

On Thanksgiving Day 1926, Michael and Alberta were married at Ebenezer Baptist Church. The family of Michael and Alberta Williams King grew quickly, with the birth of their first child Willie Christine King in 1927. At 32, Michael King had his first son, Michael King Jr., who joined the family in 1929. The youngest, Alfred Daniel Williams King, joined the family in 1930. The family raised their children in a strict but loving household. The children attended their father’s sermons every Sunday, where Michael King Sr. instilled a strong core of beliefs. 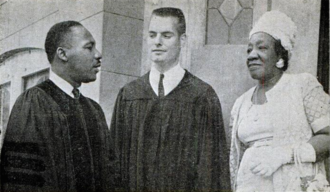 In 1934, Michael King Sr. traveled by ocean liner to Europe. In Germany, he visited the historical site associated with reformation leader Martin Luther. Luther was a German monk who rediscovered the Christian faith after being excommunicated by Rome. He criticized the Catholic Church for allowing people to buy forgiveness for sins by paying money. In doing so, Martin Luther challenged the authority of church leaders and sparked the Protestant Reformation. Drawing inspiration, Michael King changed his name (and that of his eldest son) to Martin Luther King upon returning to Atlanta in August 1934.

True to his namesake, Martin Luther King, Jr., witnessed his father speak truth to power while standing up to a police officer who insisted on calling him “boy.” Pointing to his son, Martin Luther King, Sr. demanded respect stating firmly, “This is a boy, I’m a man; until you call me one, I will not listen to you.” Upon which, the officer wrote the ticket and left the scene.

As a young boy, Michael King, Jr. witnessed firsthand the harsh reality of blacks under Jim Crow and racial violence. The experience shaped his life and led him to fight for equality. In becoming Martin Luther King Sr., he sought the Black church as a refuge from racial animosity and the various ways it manifested as a form of oppression. In doing so, he paved the way for the civil rights movement of the next generation.